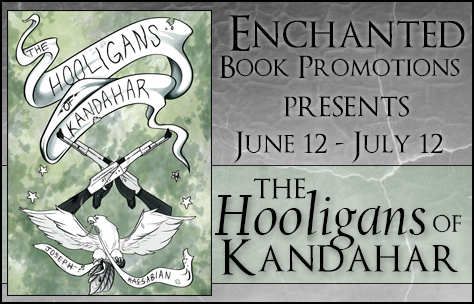 Please welcome Joseph Kassabian to my blog today, author of nonfiction / war memoir “The Hooligans of Kandahar”. Welcome, and thanks for answering my interview questions.

When did you know you wanted to be an author?
I think it was first real career choice as a kid, slightly after “Astronaut” and “Professional Hockey player”.

There is a TON of books about the Afghan and Iraq wars out these days, not as many as romances centering around vampires and werewolves, but still a lot. Nearly all of them are totally identical though. Heroic, patriotic dude kills a bunch of terrorists, plants an american flag, and returns home as the magical hero. I’ve read a bunch of them, and they are well written. But I couldn’t help but think after reading them after nearly 10 years of military service and multiple combat tours, that they are absolutely nothing like what the normal soldier experiences. I felt like people were glorifying our military into all being like those heroic, patriotic dudes from the books and movies rather than being normal people. I felt like that did the military as a whole an injustice.

Title: The Hooligans of Kandahar

During the peak years of the Afghanistan War, a group of soldiers is dropped by helicopter into the remote mountains outside of Kandahar City. Mismanaged and overlooked by command, how they survive is largely up to them. In the birthplace of the Taliban, some men lose their sanity, others their humanity. They are The Hooligans.

Written in the months and years following his deployment, Joseph Kassabian recounts his time in the isolated and dangerous country of Afghanistan. Pulling no punches, The Hooligans of Kandahar is a sobering, saddening, and often sarcastic first-hand account of America’s War on Terror.