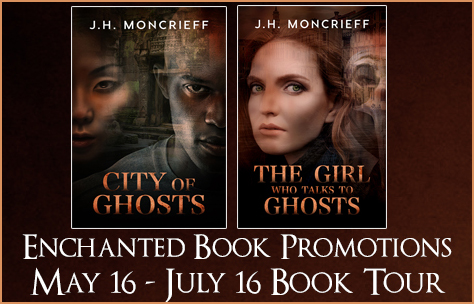 I’m interviewing J.H. Moncrieff today, author of supernatural suspense “City of Ghosts” and “The Girl Who Talks to Ghosts”. Enjoy the interview!

As soon as I got over the cowgirl and zookeeper phases of my childhood—around five years old. I wrote a series of picture books featuring a fish family inexplicably stalked by a bear who managed to terrorize them under the ocean. Shockingly, they haven’t been published yet.

What inspired you to write City of Ghosts and The Girl Who Talks to Ghosts?

I was on a tour of China in 2014, and fell madly in love with the country. I wanted to write about it, but could not come up with a decent idea. Then I visited a ghost city. It was pretty campy, but I could easily see how creepy it would be at night. What if someone got trapped here? I thought. What if they wanted to get trapped here? Within a few days, the main character, Jackson, started telling me his story, and I was off and running.

Kate, the protagonist of The Girl Who Talks to Ghosts, was a supporting character in the first book, but beta readers loved her and wanted to know what happened to her and Jackson after they left China. That and a visit to Poveglia—widely considered the world’s most haunted island—were the impetus for writing that book.

Definitely. I had the general idea of City of Ghosts before I started writing, but with the second book, all I knew was the setting. I had no idea how to get Kate and Jackson together again (they live in different states) or why they would go to Poveglia. Thankfully, my characters told me once I gave them the chance. They always do.

After I’m finished the first draft, I let it rest for a few weeks. Then I read the entire manuscript through in a few sittings, polishing it as much as I can. Once the second draft’s complete, it goes to my editors and beta readers. I then do another round of editing. The polished third draft goes to my copyeditor. When his changes are made, I send it to two readers who have a knack for catching typos we might have missed. Once I hear back from them and any final errors are corrected, it’s done. Whew!

Since I work with a few publishers, I won’t be taking much time off. I’m releasing six books this year—three in the GhostWriters series, and perhaps a novella with Kate and Jackson at Christmas—and at least five next year.

I have several projects in the works. I’m finishing up the third installment in the GhostWriters series, which will take Kate and Jackson to Egypt. Aside from that, I have some stand-alone books I’d love to finish—a mystery, a psychological horror, and a dark romance. And I have a handful of manuscripts I’m shopping around.

On the day the villagers were forced to flee Hensu, not everyone got out alive.

Jackson Stone is touring the abandoned Chinese city when he slips away from the group to spend the night, determined to publish an account of his ghostly experiences there.

Then he meets Yuèhai, a strange, soft-spoken woman who can tell him the city’s secrets—secrets the Chinese government would kill to keep hidden.

As Jackson uncovers the truth about Yuèhai and the ghost city, he’s drawn into a web of conspiracy, betrayal, and murder. He must risk everything to save himself and bring honor back to Yuèhai and her family.

The Girl Who Talks to Ghosts

Would you risk everything to save a stranger?

Off the coast of Venice lurks Poveglia, the world’s most haunted isle, steeped in centuries of innocent blood. A deranged doctor who took great joy in torturing his patients in life continues to rule his abandoned asylum after death.

Few go to Poveglia willingly, but medium Kate Carlsson has no choice. It’s her job.

While struggling to retrieve a young girl’s soul, Kate uncovers some shocking truths about the evil on the island that challenges her own convictions and morals—and even her life.

Is saving Lily worth making a deal with the infamous Doctor of Death, or is the price too high to pay?

J.H. Moncrieff’s work has been described as early Gillian Flynn with a little Ray Bradbury and Stephen King thrown in for good measure.

She won Harlequin’s search for the next Gillian Flynn in 2016.

Her first published novella, The Bear Who Wouldn’t Leave, was featured in Samhain’s Childhood Fears collection and stayed on its horror bestsellers list for over a year.

When not writing, she loves exploring the world’s most haunted places, advocating for animal rights, and summoning her inner ninja in muay thai class.

To get free eBooks and a new spooky story every week, go to http://bit.ly/MoncrieffLibrary .