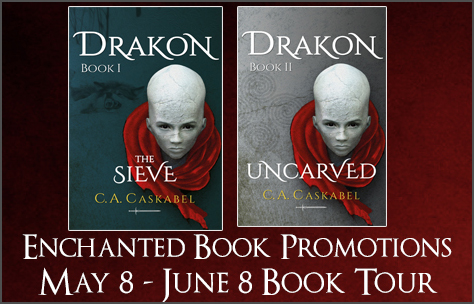 Today I’m interviewing C.A. Caskabel, author of fantasy series “Drakon”. The first two books in the series: “The Sieve” and “Uncarved” have already been released. Welcome to my blog!

Even in elementary school, the teachers had fun reading my essays to the whole class, so I built a level of false confidence early on. I wrote a novel that was published abroad when I was back in college, but then I stopped and went to work. Tech, software, advertising. It was creative but not literature. I always knew that I would return to writing, but I had already figured it is a full-time thing, you cannot do it if your primary job is different. So, I waited and waited, until I quit my day job and focused fully on the writing four years ago. Everyone will tell you “don’t quit your day job” but they will also tell you that writing a fantasy series is not something you can do on your free time.

What inspired you to write “Drakon”?

A dream. It is the ending of book 4 and the series. It was very vivid and very violent, I saw it many years ago, but I kept it as a path that I had to enter and walk backward. I couldn’t get it out of my mind.

It then found a purpose, describing the story of a man born on the wrong side of the battle. We’ve read so many stories about the knight or the chosen prince who is destined to fight evil. What intrigues me is reading the story of an orc (ok, a handsome orc) who one day says: “the heck with evil Sauron and all this, I had enough.” How does one make such a choice when he is born on the wrong side of the battle? Without wizards to help him. What is the price to pay for crossing your tribe when you realize the wrong they are doing? Is love enough of a driving force to transform you? Drakon is a dark epic fantasy story, but it is also a love story. It is a story about understanding those we were born to consider as enemies.

It is tedious and expensive as hell. It is most of the work, a lot more work than the writing. I may read every chapter thirty times and edit it twenty times. I write during the day, read it before bed and highlight everything that I don’t like, edit the next morning. Same for a second day. Then I will redo it once I have a few chapters together. It then goes through three different editors (one is a professional editor (Chicago Style Manual and all that), the other a professor, the third an experienced writer). Unfortunately, for the financial side of the equation, they all add a lot of value. Editing is probably 50% of the work. Research and plotting are 40%. The actual writing is only 10%.

There was a big difference for me because this is my first fantasy series, so by the time I got to book 4 I was much more experienced. The first book is also extremely difficult in any fantasy series. You have to deal with world-building (and Drakon’s world is very different than common fantasy themes), introducing the characters, keep a fast pace, deal with backstory, keep it exciting without confusing the reader, have a hook. Everything needs to happen there, and you also have the agents asking for these first twenty pages all the time. To be fair, I think there are some of these problems in Drakon as well. Readers need a few chapters to get into the world. In my experience as a reader, this is true for most of the fantasy series.

Drakon Book I and II are out, Book III will be published in June, and I need to complete some revisions on Book IV that will take another two months, shooting for October publication. These are the things that must happen in 2017. Then I am starting research for the next series which is very different.

All of the above, and also having to spend a lot of time on marketing and publicity. I live in Boston but I also manage a small publishing house back home, in Greece. We publish some fantasy and children books. It is fun, and has helped me a lot being familiar with the whole process and issues in detail.

Book I “The Sieve” is Book I of the epic fantasy novel Drakon.

“I am here to redeem the lives of my wife and daughter. I’ve brought the offering.” Da-Ren, an infidel barbarian, arrives at the Castlemonastery, his only offering a jar of honey.   Baagh, the Cross Sorcerer, follows him there under orders of the Emperor, demanding from the monks to transcribe the warrior’s story. Book I chronicles Da-Ren’s early years, growing up in a tribe of archer riders and pagan witches, camped north of the Blackvein River.  He enters the Sieve, the forty-day initiation trial that determines the fate of every boy and girl. Many of his comrades will fall, the strong will join the warriors, and an elite few will be marked for leadership. Da-Ren learns to endure the elements, to obey the Truths, to keep standing when all hope is lost. He swallows the legends of the OunaMa witches, learns to hate all other tribes, and conquers fear.  And yet there is one trial that will bring him to his knees. The Goddess’s favorite daughter. “Brown-haired, brown-eyed. Brown was the first color of the day.” The journey begins for the man who will become the First Blade of the Devil.  A brutal, poetic, first-person narrative of war, death, and love.   Book II

“Uncarved” is Book II of the epic fantasy novel Drakon.

“How do the Uncarved die? They bleed to death. Always.” Fourteen-winter-old Da-Ren joins the Uncarved, the chosen few destined to lead the Tribe. More than forty children train and compete for the next five springs; only one will become Khun and fulfill the Tribe’s destiny.  Da-Ren’s ambition and strength will keep him alive but can he overcome his most powerful and cunning adversary, the one favored by witches and men? The Goddess and the Ouna-Mas will try to nest in his heart, but is he prepared for the one woman he is brought up to hate? As war and hunger strangle the Tribe, the stakes of love, duty, and betrayal are higher than ever. A young man’s first kill. A young man’s first kiss. A coming-of-age tale with non-stop action.

C.A. Caskabel started writing Drakon in 2013 and completed the 350,000-word epic series in 2016. He plans to release the books gradually in 2016 and 2017 while he researches and writes his next series. He also works with a passionate small team that publishes primarily children’s fiction and fantasy fiction.
Prior to 2013, Chris was a serial technology entrepreneur. He has founded and led a number of start-ups in businesses such as digital marketing and renewable energy. He has led creative departments, marketing, and software product organizations in New York, San Francisco, London, and Athens.
He holds a BSc and a BA from Brown University and a PhD in Engineering from Boston University.