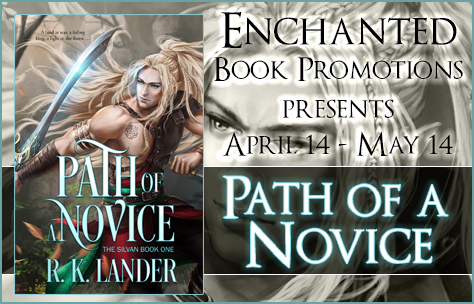 When I couldn’t find what I wanted to read! But if you had asked me that five years ago, I would have laughed by socks off. Me? a writer? I loved languages, started a business, studied astronomy. I always thought that was the way it would stay, reading in my spare time, watching geeky movies.  But then I read a few fan fictions, of all things, and thought there were fabulous; unpublished authors writing for the simple pleasure of it, and doing it so well. I loved it, and the spark of curiosity flared in my mind.

What inspired you to write “Path of a Novice”?

I became obsessed with J.R.R. Tolkien, and specifically with his multi-racial society. However, I was left disappointed in some aspects, not for the writing itself but the lack thereof. Tolkien delves into the Noldorin elves, their history, culture, song, politics, wars, but the Silvan elves are hardly mentioned at all. I wanted to know who they were, why they were not ‘high elves’. It almost read as favouritism on the part of Tolkien and yet I was always more inclined to empathise with the Silvan elves, the forest dwellers.

And of course, when you can’t find what you want to read – then you write it. In Path of a Novice, I pick up on the point of Tolkien’s apparent favouritism and depict a land that discriminates against the Silvan people, and how they deal with their designated role as second-class citizens.

Remember this is my first novel – even so I suppose there is no excuse for the chaos my life was reduced to when it came to the editing stage. I had this massive, 849-page novel I needed to knock into three instalments and it drove me completely bonkers. How many scenes I juggled around, re-wrote, trashed in anger … and then with the final edit and all those horrid pink track changes – luckily I had an encouraging editor – still.

I know that experience will make for a better edit next time round, and a better book.

What’s left of this year will be taken up with editing the second book in the trilogy, Road of a Warrior. I want to draw on my experience with Path of a Novice and produce a great book. I have learned so much in the past year and when I look back at what I was writing just a year ago, I can’t believe the changes. Hopefully the same will happen in 2018 when I look back on this year and say ‘wow – I’ve come a long way.’

Road of a Warrior is the second book in The Silvan Trilogy. I am currently doing a structural edit on it so there’s still a way to go. I am looking forward to the feedback on Path of a Novice and have every intention of taking my time with this second instalment. Beyond that, there is book three on the horizon. For now though, I want to sit back and observe, observe and learn and then implement what I have learned to produce the best book I can.

Title: Path of a Novice: The Silvan Book 1

A land at war, a failing king, a light in the forest …

Bel’arán, land of mortals, immortals, and those that dwell in between. The elven forest realm of Ea Uaré is threatened by ruthless Sand Lords seeking water, and the undead Deviants who crave the mindless destruction of elves.

The powerful Alpine lords strive to dominate the leaderless native Silvans through power games, leaving in their wake a bereft king, assailed by grief and a family unable to forgive him.

As the king drifts in endless sorrow, the forest people are loosing their identity. Discriminated and belittled, they are the warriors but the Alpine lords are their commanders – until a child is born to the Deep Woods – an elf with the face of an Alpine and the heart of a Silvan, an orphan whose only dream is to dare become a Silvan captain in a world dominated by Alpines – Fel’annár, Green Sun.

A born warrior, to his friends, Fel’annár becomes Hwind’atór, the Whirling Warrior, and together, they will step upon the path of a novice.

Adventure, hardship and self-discovery will mould the warrior he will become. But destiny will not be ignored, and Fel’annár is confronted with the truth of his own abilities and the mystery of his past, one shrouded in sorrow and intrigue – one that may change the course of history.

From child to novice warrior and beyond, Fel’annár is, The Silvan.

R.K. Lander was born in the UK. Fantasy was always a central part of her life and soon began reading authors such as Arthur C. Clarke, Isaac Azimov, Ray Bradbury and J.R.R. Tolkien. Now living and working in Spain, Ruth runs her own business and writes as an independent author.

The Silvan is her first work, a YA epic fantasy trilogy revolving around the figure of a Silvan elf, Fel’annar. The first in the series, Path of a Novice is available for pre-order, and the second, Road of a Warrior, is approaching the editing stage.