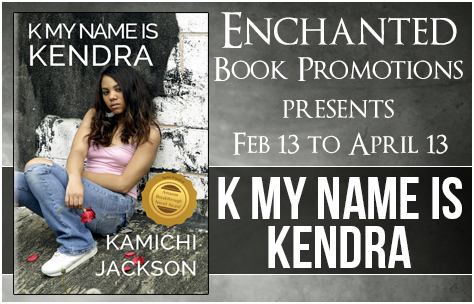 When I was a child, I read a lot. THOUSANDS of books! We lived across the street from a library, and I spent hours upon hours there. So growing up, I learned to appreciate the power and beauty of words and storytelling. But I never knew then that I even had it in me to write my own stories. It wasn’t one of those “when-I-grow-up-I-want-to-be-an-author” situations. Back then, it was only about reading.

And then when I was in my late teens/early twenties, I tried my hand at writing a story, which I called And Then There’s Bunk Nine. I wrote pages and pages—in pencil and on lined notebook paper—until I had an entire book-length manuscript (which I never did anything with). That’s when I first toyed with the idea of actually someday being an author, though it would still be several years before I published my first book.

What inspired you to write K My Name is Kendra?

I’ve been asked this question a lot lately, and I can’t seem to pinpoint the moment when I knew I had to write Kendra. I do know that it started out originally as a book called Queen of the Scene. I don’t remember much of the original story now—not even the name of the character—nor do I remember how much of that story survived to become K My Name Is Kendra. But there must’ve been some trigger in my own personal life that made me realize that I just had to write this book.

What I did quickly realize was how this particular story had the potential to help so many readers—girls in particular. And not just black girls. Kendra’s story is universal and affects girls of every ethnicity, background and culture. So at some point, knowing that became the inspiration to finish the book.

Believing that you have a powerful, amazing story to tell but struggling to be heard through the crowd of everyone else with equally amazing stories to tell. It can be incredibly frustrating, and almost every day I am reminded of why I stopped chasing my dreams years ago.

But I really believe in my work—especially K My Name Is Kendra—because it wasn’t written just for entertainment purposes; it was written to help teenage girls (and even boys) in crisis, no matter what their background, ethnicity or culture.

When I remember that, then I am reminded of why I take the risk of chasing my dreams.

The problem is once I’ve actually reached the editing process, and then I edit to death! I go through the manuscript again and again, and I’m never satisfied that everything I wrote is just the way I want it. At some point, though, I tell myself that I have to let the work go or risk never putting it out. So I finally let it go.

But even after it’s published, I still second-guess myself in some passages or dialogue.

I have a book that I call my masterpiece. It’s called The Brownstone, and this manuscript has been collecting dust for years now. My goal is to pull it out and finally finish it, which really shouldn’t be as difficult as I am making it out to be to myself. I wrote a treatment for this book at a time when I had an agent and she encouraged me to do so in hopes of pitching it as a made-for-television project. I know where the story goes. I know all the characters’ secrets, where the bodies are buried, et cetera. I’ve written nearly eighty pages. I am determined to pick up on page eighty-one and continue until it’s done—one page at a time. And then I’m looking at an early 2018 release.

I’d also like to finish a short film script that I started a few years ago.

And this year, for the first time ever, I want to participate in NaNoWriMo. Looking forward to that!

At this very moment, I’m scribbling notes for a possible follow-up book to K My Name Is Kendra. I have no idea what the storyline will be. But I am jotting down notes and dialog that are coming to me.

I am also going to re-release my first book—a young reader book called You’re Too Much, Reggie Brown. I sold a thousand copies of that book back in 2000, but I think that in this current indie publishing market, I can introduce the title character to an even larger audience of readers. Very excited about that!

I’m also going to release a fairytale later this year. I won’t say the title and it won’t be released under the name Kamichi Jackson. It’s so different from anything else I’ve already put out or plan to put out. But I’m aching for people to understand that I don’t just write what some would consider “black” books. I write everything, and I want everyone to read it!

Title: K My Name is Kendra

Fifteen-year-old Kendra James’ life begins to spiral out of control with the return of her long-lost runaway sister Meisha, and the visit of a young celebrity uncle with questionable intentions. Things take a particular turn for the worse when that uncle exploits Kendra’s loneliness and untreated depression and makes a move on her that sends her world into a tailspin from which she’s not sure she’ll ever recover. Will she survive this tragedy…or will she hit rock-bottom before anyone even notices?

In addition to K My Name Is Kendra, Kamichi Jackson is the author of an eBook entitled Where Present Meets Past (originally available as part of the now-defunct Amazon Shorts Program), the middle reader book You’re Too Much, Reggie Brown, a forthcoming adult novel entitled The Brownstone, two unproduced screenplays, and several short stories. KJ has made numerous appearances in support of her work, among them the Baltimore Book Festival. When not writing, Kamichi is likely off somewhere singing karaoke. The South Norwalk, Connecticut native currently resides in Northern Virginia with family.