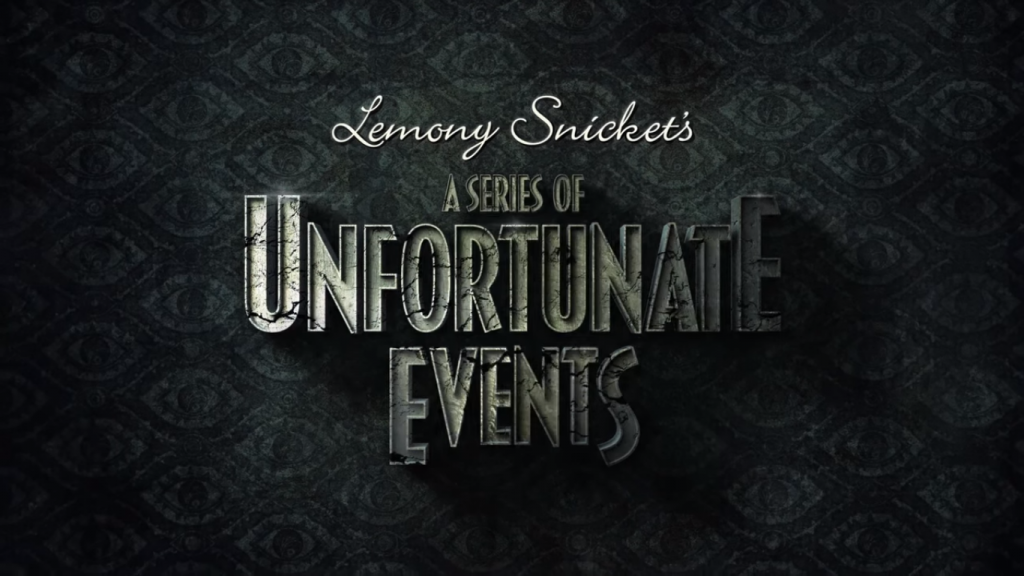 I have to admit two things I’m slightly ashamed of. First, I’ve never read Lemony Snicket’s A Series of Unfortunate Events. Considering how much I read and how enjoyable this series sounds (gothic elements, two kids in the starring roles, focusing on books and literature and witty humor) and how it sounds like the kind of books I’d absolutely love, I’m ashamed to admit I never really considered picking them up and reading them?

Why? Well, that’s the second thing I have to admit. I despised the movie. In 2004, Jim Carrey starred as Count Olaf in A Series of Unfortunate Events. I tried to watch the movie at least three times, but gave up every single time. I don’t like Jim Carrey – I don’t think he’s a very good actor (a very unpopular opinion, I’m sure), and I didn’t like how he portrayed Count Olaf in this movie.

But the series… Something about it intrigued me. It looked less colorful than the movie, and the trailer was very inviting, so I decided to give it a try.

And now I’m officially a fan of A Series of Unfortunate Events – not the books or movie, but the TV series.

Don’t Watch This, You Are Warned

From the start, I was entertained as both the narrator (Lemony Snicket, who plays a huge role as he appears at least half a dozen times per episode to give us his comments or insights, or explain difficult words in ways that only fit the exact situation as it happens in the series) and the song at the start of the series warned me not to continue watching. The title song changes a few times – episode 1 and 2 have the same song and are based on the same book, episode 3 and 4 are based on another book and have a slightly different song, etc. The tune stays the same, but new warnings fitting that particular book have been thrown in.

The series has a very unique style and look that instantly reminded me of Tim Burton. Whimsical but gothic, colorful and dark, it all mixes and matches, and looks fabulous. The costumes look great and the sets are absolutely stunning. It’s a mix of The Chocolate Factory and Sweeney Todd in style and feel – sometimes colorful and lovely, sometimes dark and bleak.

Every two episodes focus on a different book. There’s a total of thirteen books, so that means they can pull this off for at least two more seasons, which I hope they do. The format allows for a solid build up in each episode, a suspenseful middle part, and climax at the end.

I don’t think I’m spoiling much for anyone (except fellow newbies to the series) by saying that Violet, Klaus and Sunny Baudelaire just lost their parents in a massive fire, and now have to move in with their closest of kin, which appears to be a mysterious actor known as Count Olaf. Count Olaf is the villain of this series, and he’s portrayed here in a surprisingly awesome way.

He’s a villain but still you don’t get the feeling that he’s all that villanous. He does awful things, doesn’t mind murdering a person or two, an yet, he’s still whimsy and funny at the same time. It takes a skilled actor to pull that off, and Neil Patrick Harris does an amazing job portraying Count Olaf.

I’ve read some reviews that say the acting of the Baudelaire children (actors Malina Weissman, Louis Hynes and Presley Smith) was a little flat, but I didn’t think so. I thought they were supposed to be a little flat, a little numb, and that the actors did a tremendous job portraying what I’m sure are difficult roles – they’re not happy-go-lucky children, their circumstances are far from ideal as tragedy follows them from one place to another. Portraying sadness, the kind that’s not instant but follows you everywhere, is very, very difficult, and I think they did a good job here.

The series is filled with references to books and literature and authors, and for a book fan, it’s an absolute delight. Every house the Baudelaires enter has a library – some grand and majestic, others small and cozy. Watching this series basically feels like reading a book.

If you like books, gothic series, whimsical fun, then I’m pretty confident you’ll love A Series of Unfortunate Events. The acting is great, the visuals are stunning, and everything about the series is just downright perfect. I wouldn’t change a thing, and I’m already looking forward to season two.