Author Interview with Gordon A. Long 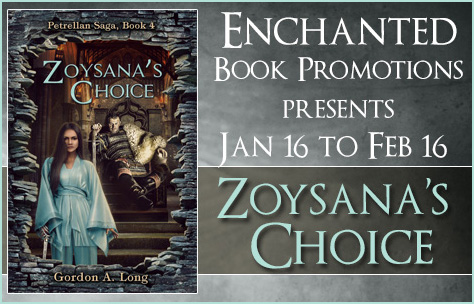 The quick answer is that I didn’t; it just happened. I started out as a theatre director, and soon discovered that the theatre does everything backwards. They get a play written by somebody they don’t know, and then try to find an actor that fits each role. When you’re dealing with amateurs and students, that’s very hard. I soon found that if I chose the actors and wrote the script for them, and sometimes with them through improvisation, they fitted the roles much better (and remembered the lines better, too). So I ended up writing my own plays for years. I have always been an avid reader, and I just sort of slipped into writing novels. First one book, then another, and then I realized I really enjoyed it, and here I am.

Looking back on it, I think I created Zoysana after my two sons were born and I realized I was never going to have a daughter. So I made one up. I was also inspired by Shakespeare’s Macbeth (I even borrowed the main character). And if you want to get esoteric, I have always been fascinated by the existential concept of stripping a person down to his or her essential being, and making a choice completely independent of the influences of the world. So Zoysana’s Choice is an Existentialist novel. Take that, Herman Hesse and Franz Kafka.

When I start writing every day, I go back and read what I wrote yesterday, to fix up any details I notice, and put me in the picture and in the mood for today’s writing. So that’s my first edit. Then I read through about a thousand times when I’m writing and polishing. Then I use an online digital editing service to pick up technical errors and typos. Of course, I have a real human editor, because that’s essential. Then I go through a few more times looking for typos before I upload it to the printer. Once I get the first proof copy back, I read the story backwards, one paragraph at a time with a ruler under each line. That makes me focus, and I pick up a lot of errors.

And I still find mistakes in the final copy. That’s editing.

Promoting and selling a book. I’m a writer, not a salesman. But I think everyone says that. I’m forever grateful to people like Majanka who can take part of that task off my hands, and use their skills on my behalf.

The part about writing that challenges me the most is villains. I don’t like nasty people, and I object to having them in my books. So I tend towards conflicts that are character against environment, especially character against social environment. The best villain I ever wrote was based on a boss I had once, and I won’t say anything more, because I might get sued. But he’s a great villain, because he’s realistic.

I will be publishing “The Innkeeper’s Husband,” book 5 in the Petrellan saga, some time in the summer. It’s at the editors right now. It’s about a minor character from “Zoysana’s Choice” whom she recruits to become a leader in her battle against the Inari, Petrella’s enemy in that novel. Unfortunately for him, he’s very good at it, but he wants to quit to become an innkeeper.

I’m also publishing “Queen of Mischief,” Book 5 in my World of Change series. The main character in this book is Jameta anDennal, the main character and friendly rival of Aleria in “The Trouble with Tents.” “Queen” is about half way through the first draft, and at the moment I’m having trouble creating conflict between Jameta and her new husband, Erlon, because I did such a good job of making them compatible in the last book. Serves me right.

I’m also going to publish a stand-alone fantasy I wrote ten years ago, “The Power to Serve,” which joins together the two best-known cattle-worshipping societies in history, the Minoans of Ancient Crete and the Californios of the American South-West.

I’m also working on the ElderStory Project: recording, collating, and editing a book of tales collected from seniors in my community, on a grant from the federal government. I now have 250 stories from 80 storytellers, so we’re making good progress. It will be published in the spring.

Discovered as a child living alone in the forest and growing up an orphan of mixed parentage, but under the protection of the king’s youngest son, Zoe is appreciated for her own merit by everyone, from the royal family to the lowest kitchen wench. But her secure nest is shattered by conflict in the king’s family, and soon she will have to decide where her loyalties lie.

She flees to her former home in the mountains, where she finds many answers, but not to the questions she is asking.

Then she is offered the chance to visit Kyabra, the home of her grandfather, to learn about that ancient culture.

But all of these travels come to naught when she hears of war at home, and she returns to Petrella to be faced with a decision that could stop a war and change the lives of thousands, but only at the greatest personal cost.

This is the first published work of a 7-book saga of standalone novels tied together by characters and setting. Books 4 to 7 are sequential, and Books 1 to 3 happen 400 years earlier.

Brought up in a logging camp with no electricity, Gordon Long learned his storytelling in the traditional way: at his father’s knee. He now spends his time editing, publishing, travelling, blogging and writing fantasy and social commentary, although sometimes the boundaries blur.

Gordon lives in Tsawwassen, British Columbia, with his wife, Linda, and their Nova Scotia Duck Tolling Retriever, Josh. When he is not writing and publishing, he works on projects with the Surrey Seniors’ Planning Table, and is a staff writer for <indiesunlimited.com>