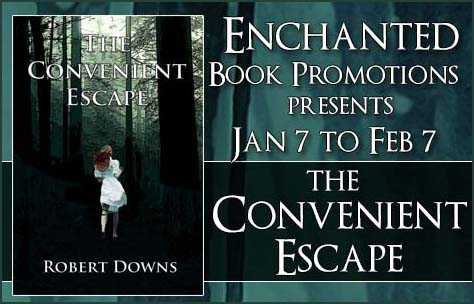 I’ve always enjoyed reading, and when I was younger being read to, and I’ve dabbled in song lyrics, or what I refer to as really bad poetry. But it wasn’t until I watched Finding Forrester that I changed my way of thinking when it came to writing. Contrary to what people might believe about writers, I always hated writing in school, because it was all about the rules (not necessarily a bad thing), and it was forced down my throat. After seeing Finding Forrester, something clicked for me, and I realized for an introvert I had a whole lot to say. The movie opened this massive floodgate for me that I haven’t been able to close. And if I’m lucky, it’ll never close.

2)      What inspired you to write The Convenient Escape?

Nothing in particular inspired me, at least not that I remember, but I’d always wanted to write a thriller, and in fact, I wrote a few before I was able to successfully publish THE CONVENIENT ESCAPE. When I write, I like to constantly challenge myself, and expand my repertoire as a writer. I’d worked on the manuscript off and on over a period of several years before I finally had a draft that I believed was good enough to publish. What I like about thrillers are the pace and the chase, and that’s what I tried to do in this instance. I’ll leave it up to my readers to let me know if I’ve succeeded.

3)      What do you find the most challenging about being an author?

I feel really blessed that I’m able to do what I love every day, and that I’ve published four books, and I’m under contract for four more with Black Opal Books. Instead of challenges, let’s call them opportunities or character building experiences. Anytime, you’re creating something out of nothing there’s always the fear that your writing isn’t any good and nobody’s gonna read it. My contracts are one book at a time, so there’s always the fear that no one will want the next book, and the party’s gonna end tomorrow. But fear is an excellent motivator, and it allows you to take chances you might not otherwise take.

My first editing pass is with a hardcopy and either a red or blue pen, so the changes I make easily stand out against the black font. I hack away at my manuscript as much as necessary. Once I have this pass completed, I’ll input the changes into my computer, and I often find that there are more deletions or additions I need to make. I mark places where I need to beef up my manuscript with an ampersand, so I can expand upon them later. Once my manuscript is more streamlined, the addition begins, and I’m adding characters or description or scenes or even chapters. I’ll do as many passes as I need, and this varies from manuscript to manuscript. I alternate between editing the hardcopy and what’s on my computer. I’ve found that I don’t always catch the same things on my hardcopy that I do on my computer, so alternating between the two helps aid whatever project I’m currently working on. In its simplest terms my editing process is subtraction followed by addition. This process doesn’t work for everyone, but I do know it works rather well for me.

I did. I’m a goal setter by nature, and I’ve set the bar a little higher than usual this year. I’ve completed National Novel Writing Month (NaNoWriMo) every year since 2012, so my goal is to keep the streak alive, and once again enter the contest in November. I’ve also done Camp NaNoWriMo once before, and I thought I might give it a go this April. I have ideas for two novellas, and I’d like to see them come to fruition this year. Aside from new material, I have four manuscripts that are currently burning holes in my desk drawer, and I’d like to move them from my desk into my publisher’s hands. Handing over a completed manuscript is a wonderful feeling, and it never gets old.

I am indeed. I take breaks from writing, but the breaks never last for long. I discovered a long time ago that days that involve writing are better than days that don’t. I am completing the final edit for what I hope will be the third Casey Holden mystery, and my plan is to hand it to my publisher later this month. It’s tentatively titled FINANCIAL IMMORTALITY.

When he’s not writing, Robert can be found reading, reviewing, blogging, or smiling. THE CONVENIENT ESCAPE is his fourth novel. To find out more about the author, please visit his website or Facebook Page.

To Veronica Baird, escaping from an underground dungeon and racing through the woods, is anything but convenient, even as her captor in rubber mask attire proves rather persistent in his continued pursuit. Despite her apparent independence, she considers a partnership, albeit reluctantly, with a former classmate who may still have feelings for her.

Pete Nealey still has flashbacks to Iraq and, with the bottle as his eternal companion, tends to fall off of barstools at the most inopportune moments or pass out face down in the tavern parking lot. But what he may lack in cheerfulness, he more than makes up for with his steadfast loyalty to the cause, even when he ends up handcuffed to an air conditioner in a shoddy motel.

But unless Veronica can learn to trust Pete for more than just intermittent intervals, the slipshod relationship, and her freedom, won’t last…

Robert aspired to be a writer before he realized how difficult the writing process was. Fortunately, he’d already fallen in love with the craft, otherwise his stories might never have seen print. Originally from West Virginia, he has lived in Virginia, Massachusetts, New Mexico, and now resides in California. To find out more about what’s next on his list, visit the author’s website: www.RobertDowns.net.

When he’s not writing, Robert can be found reviewing, blogging, or smiling. Falling Immortality and Graceful Immortality helped him discover his true love: hard-boiled mysteries. LaCour’s Destiny helped him enter the mind of a female amateur sleuth with OCD tendencies. His fourth and fifth novels will come out this year with Black Opal Books.