Movie Review: Rogue One: A Star Was Story 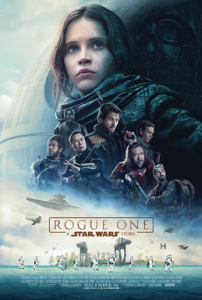 If you haven’t heard about Rogue One yet, then I’m willing to bet you spent the last months hiding under a rock somewhere or you were accidentally involved in the zombie apocalypse on another planet and have just returned home.

Rogue One is a Star Wars spinoff, which means that while it’s set in the same universe, it features new and exciting characters. So no Luke or Rey as main characters. Instead, we get a brand new cast, a semi-new setting but with a lot of tie-ins to the original trilogy, and even an appearance of Darth Vader. I won’t spoil it to tell you when, but it’s one of the most epic scenes in the entire movie. And given this movie was pretty epic, that’s saying something.

The thing is, I thought The Force Awakens was a huge dissapointment, so I went in with little to no expectations about Rogue One. But this… This movie is, in my honest opinion, the best Star Wars movie I’ve ever seen.

Yeaaaah, I know people aren’t going to agree, and I know the originals are supposed to be the best, but seriously, Rogue One is basically Game of Thrones meets Star Wars. How can I not declare it my favorite Star Wars movie?

Anyway, PLEASE don’t read on if you haven’t seen the movie. I figure just about everyone who wants to see it has seen it by now, but if you haven’t, and you don’t want any spoilers, then this post is NOT for you. Sorry! 🙂

In the original Star Wars trilogy, you have a rather clear cut vision of who is supposed to be a hero and who isn’t. Even though Anakin turned dark throughout the trilogy, he went from good to evil, no grey inbetween. And although they tried to make Kilo Ren a more grey character with moral struggles, he’s boring and annoying and nobody likes him. But Star Wars has always been about heroes. Luke was a hero, and you knew he wouldn’t die because he was the hero. Darth Vader was the bad guy. Easy, peasy. Almost like a fairytale.

But Rogue One turns that whole concept upside down. There are no good guys here. Everyone is morally corrupted, even the main character. The future is bleak, the truth is brutal, people get hurt, people die, and that’s cold and harsh but it’s reality. It’s not a fairytale anymore. Never before have we seen the true cost of the war raging between The Empire and The Rebellion as we’ve seen in this movie, so up close and personal as characters we follow for about two hours end up passing away.

Jyn is a complex, intriguing character who holds no love for The Empire, nor for The Rebellion – and that’s amazing. Here we have someone who hates both sides, yet is willing to help The Rebellion just because The Empire is even worse, and because she wants to complete the mission her father risked his life for. And how heartbreaking was it when Jyn was finally reunited with her father, and he passed away? That’s cold, man, that’s Game of Thrones cold. Immediately, as a viewer, you know this movie is unlike any other Star Wars movie when that happens. You know there’s a chance good isn’t going to win this time around – and who are the good guys anyway? Because as we see clearly through Jyn’s perspective, The Rebellion isn’t all it’s made out to be either.

Felicity Jones plays the part of Jyn amazingly well. One of the best character performances I’ve seen in the entire Star Wars series. Diego Luna, the actor portraying Captain Cassian does a phenomenal job as well, and his character too is pretty awesome. He’s very flawed, contemplating doing things that go against his nature because The Rebellion told him so, but he struggles with just about every decision he has to make, and you can clearly see it on his face. Until he’s had enough and starts making his own choices, and help Jyn on her suicidal mission.

But not just Jyn and Cassian – the entire cast is hands-down phenomenal. We get a bunch of quirky side characters, but they’re portrayed so well that I wanted to know more about them and their background story. They each feel like complete people, with their own background and history and their own personality traits – a far cry from the more stereotypical characters we met in the original Star Wars movies.

The Villain, Or Lack of One

Up until now, we’ve always had a clearly defined villain. Darth Vader. The Emperor. But now, that line isn’t so clear. We’re still battling the Empire, but the story no longer is about good vs. bad and good eventually winning the day and saving the galaxy. From focusing on people, this movie focuses on ideologies, a comparison that can easily be drawn to real life, where we often fight not people but ideologies.

In Rogue One, you have the ideology of The Empire versus the ideology of the Rebellion. This makes the movie much darker. There’s no real villain to defeat – you can’t truly defeat an ideology, a thought process, a belief system. Much darker, and much more realistic.

This wouldn’t be Star Wars if it didn’t have a droid of some sort. In typical Star Wars fashion, the droid, K-2SO in this case, provides some much needed humor to a movie that is overwhelmingly dark and offers little hope for the future. There are a lot of nudges to the original movies too, most of them brought by K-2SO and they all work surprisingly well. Plus, K-2SO can fight, which gives him a real edge over the other droids we’ve seen so far in Star Wars.

And then the real kicker. Everyone dies. Or nearly everyone does – some side characters survive, but our main crew is dead. They sacrificed their lives for the Death Star plans, and it’s one of the most heartbreaking moments in Star Wars. You know it’s coming, that most of them will perish, but when they start going down one by one, you feel as if the ground is shattering underneath your feet because you don’t want them to die. You want them to live. They deserve to live because they’re awesome and they fought hard.

But Star Wars is no fairytale anymore. And as Jyn and Cassian hug each other while everything around them explodes, and they die like that, hugging each other, that’s one of the most powerful moments I’ve seen in Star Wars. That is true courage, there. True heroism. And the movie that started out with no heroes, a movie about regular people with no affinity for The Force (save for the monk, but he’s not the main character) who weren’t really heroes and certainly didn’t want to be heroes, but who decided to risk their lives anyway to save others, to save the freaking galaxy because without them, the Death Star would not have been so easily destroyed… ironically, they turn out to be real heroes. Real heroes, perhaps more even than Luke or Rey, who both had the force to back them up when things got tough. Real heroes who risked themselves and everyone they knew for the greater good.

And when you combine all that, you get the best Star Wars movie I’ve ever seen.