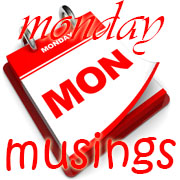 Monday Musings is a post in which I talk about my writing goals for the upcoming week, and the progress I made on my goals for the past week.

During last week’s Monday Musings post, I posted a rather long list of goals I had for this week. The goals scratched through are the ones I accomplished.

I didn’t finish writing Piggy Bank Plunder, but that’s all right because I moved publication of that book to February and pushed up publication for Sally Sleuth and The Missing Mice to January.

I also didn’t finish the first draft for Ally The Alien, and didn’t get around to editing the chapters of Allegro Academy #1, but overall I think I made some great progress, especially considering I also finished some goals I hadn’t originally planned for. I made a page for the Sally Sleuth Series and the Snoebels, Cat Detective series on my website. Additionally, I also updated my chapter books page on the website and added brand new banners for these series, and the Weirdville series. I also added a new banner for the Angel of Death Series on my young adult books page.

I finished editing and formatting Sally Sleuth and The Missing Mice, and made the book available for pre-order on Amazon. On top of that, I also set up all the info for a cover reveal party for this book on January 12, complete with custom banners for the reveal, pre-order and giveaway. I’ve pasted one of the banners below – I just love them! They fit in so well with the book.

If you want to participate in the cover reveal, please let me know in the comments and I’ll mail you all the info. We have HTML posts available too, and there’s a giveaway during the cover reveal for an eBook copy of the book and a $5 Amazon gift card.

Here are my goals for next week:

What are your writing goals for this week?