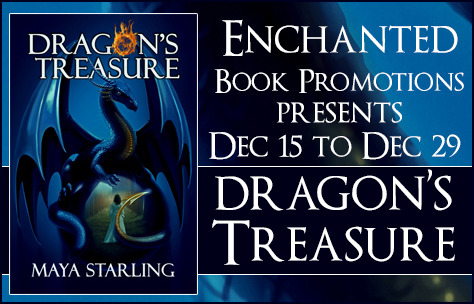 I am not one of those that new from early age. You could say I was a late bloomer when it came to reading, and then reading led to writing. So, the dream was born about five years ago when a friend urged me to just try… and it took flight from there. It was love at first written word.

What inspired you to write Dragon’s Treasure?

I felt bad for the dragons. Why did they almost always had to be the bad guys? Why does the prince have to win the maiden? I wanted to read about the what if, so I wrote it. And also, a little secret, the maiden gets to save herself in the sequel (hopefully published mid March).

It is doused in a lot of self-doubt, but… I have a friend who is my first round editor. I write a chapter, send it to her and get immediate feedback, mostly on some grammar, some current plot holes if they pop up. Once the book is done, I edit it on my own, fixing what I catch, rephrasing, polishing… Next step, time to either find another friend willing to read it through or go directly to a professional editor. Once it’s back, I implement the needed changes and send the book out to beta readers. Then, more fixing and changes if needed. That is the last stage of my editing process and the one where there’s the least to fix but it is the most lengthy one, because by that time, I am ready to move on from that book completely.

Did you set any writing goals for next year?

Three goals: Publish the sequel, finish the stand-alone novel, write and publish the third book in the Dragons Awaken series. I have no idea how I will pull it off, but it needs to be done.

From my experience, the challenges depended on where I am and what was currently happening in my life. In the beginning, as a new writer, the start was the hardest part. Actually sitting down and getting those words to flow. And not editing as I write. It was hard to give that up. Once everything was going smoothly, the self-doubt would set in. Now, when I finally have some experience, and confidence in my writing, the hardest part is finding the time. I have a little boy now who keeps me preoccupied during the day, and I miss those late night writing sessions.

As I’m answering these questions, I am sitting on my hospital bed, awaiting surgery, but I would love the most to be able to work on my NA dark fantasy novel, about a young woman seeking to avenge her twin brother’s death. She is calling out to me, ready to see the light.

A heroine reclaiming her fate. A dragon with a secret. A prince on a quest.

Olivia flees to the forest seeking freedom from her family’s demands. She finds refuge in a cave, only to discover it is a dragon’s lair. The dragon, Kaden, is not the monster she first thinks him to be. After overcoming her initial fright – of not being eaten – Olivia discovers that the dragon has a gentle heart.

Kaden is resigned to loneliness after centuries of wandering the lands. Meeting Olivia brings joy to his solitary life, and never has he dreamed that a young woman would be the one to start the change in him.

A storm brews on the horizon.

A prince with a handsome face and a cruel heart is on a quest to slay the dragon, and take the throne. He will do whatever it takes to have what he believes is his to own. And now, he has his eyes set on the pretty little maiden from the forest. He will make her his Queen, whether she wants it or not.

Maya Starling is a writer, a geek, an animal lover and a gamer. She has lived the life of a magus, an oracle, a goth mortician, a star wars rebel. She has led many lives, sitting at a table, and rolling those dice away.

In reality, she lives with her wife and their adorable little boy, and of course two rescue cats, in a small country of Croatia. Reading and writing are her passion, so you will often find her typing away a new novel or a new short story, or eyes glued to the screen of her phone or a page of a book.