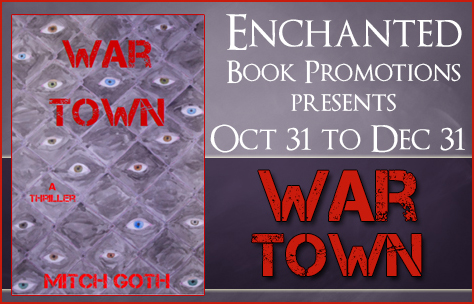 What inspired you to write War Town?

More than anything, what inspired me to write War Town was a mixture of my interest in psychology and my interests in genre fiction. Often something that bothered me about the fast-paced, action-y books, TV shows, and movies out today is that they gloss over a lot of human psychology, particularly human trauma. For example, you’ve got a main character running either away from something or towards something, and nearby a bomb goes off or something like that and a few people die. Main character notices, but keeps moving, and the story moves on without really absorbing the gravity of what just occurred, as it wasn’t pertinent to the basic action-based plot. So I sat down to write War Town with those forgotten deaths in mind, and I wanted to create a tense, action-y thriller that simultaneously dealt with human psychology and, more specifically, internal response to great trauma. And out of all that came War Town.

My editing process is very meticulous and time-consuming. It goes through phases immediately after the manuscript is completed. I work through a helpful online editing program first, then I read through with my own eyes and restructure it. Following the first two rounds of editing, I send off the work to trusted beta-readers who will help me find issues, grammatical and story-based, and work to fix them. In this time, I also get about a month or two away from the manuscript, and so when I get it back I can read it with fresh eyes and be more objective about the thing I had created. After I work through the beta-reader analysis and fix the work accordingly, I read through the whole thing again with my fresher, more objective eyes and remove or change whatever I see then that needs to be changed. By the very end, the book that gets released is usually the fifth or sixth draft of the original.

Probably the most difficult thing about writing this book was to not lose one goal in pursuit of the other. Because I was trying to do two separate things with this book (produce a fast-paced, engrossing thriller, and portray the human side of thriller-novel trauma) I had to be careful not to get bogged down in either and lose the focus of the story (and risk losing the attention of the reader). So it was a constant balance between the fast-paced thrills of the story and the more emotional, psychology-focused aspects of the story.

Yes, as of right now I am about halfway through the outlining process of my next novel, which will be the story of a man who suddenly takes on all the power and responsibility of God, and has to simultaneously deal with the pressures from a polarized world as well as internal anxiety over losing his humanity in the pursuit of being a good God. Similarly to War Town, I want to create a fast-paced story while also examining character psychology, but in a third-person narrative style rather than first person. 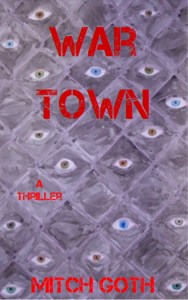 For Olly Rourke, War Town’s opening day is a joyous occasion. He is one of a thousand people selected to be the first players in the world’s largest paintball arena. But as he soon finds out, the game he enters into is far more sinister. Two equal teams, locked in the massive arena together, and presented with an armory of real ammunition and a time bomb powerful enough to kill them all. The only way out is to eliminate the other team, by any means necessary.

Mitch Goth currently resides in Yellow Springs, Ohio, where he attends Antioch College. When not writing, he spends his time investigating the paranormal and indulging in a good book or movie.