Everyone reached for their weapons. La Roche pulled a stiletto from the leather sleeve attached to his belt. He flicked the gold sword to le Picard, who caught it and spun around to defend the flank. Martel was slow on the draw to get his sword, but improvised effectively by kicking a thug in the groin.

“You should have stayed in your cave, Gator Gar. You ain’t getting outta here alive!” Al hissed.

“I should have killed you a long time ago, connard!”

The adversaries lunged for each other. Their hats spun to the floor and their blades deflected, lightly grazing each other’s flesh. La Roche slipped by his opponent to gain better footing. Al winced as a point pierced his thigh and he fell off balance toppling the table. That’s when Dogfish and Big Fred moved in, jabbing swords with le Picard and Martel. A barrage of blades chopped through the air. One cut la Roche’s arm. He dropped the stiletto and took out his cutlass. The three Frenchmen arranged themselves in a defensive triangle. 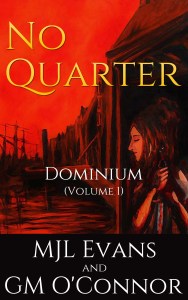 Volume 1 of 6 begins in 1689 Port Royal, Jamaica with Atia Crisp and her sister Livia shipwrecked and sold into slavery. They are separated and Atia is used as a pawn in a deadly card game at the Swiftsure Tavern until she is liberated by sugar merchant Capitaine la Roche. Hunted at every turn, they take refuge at Cherry Red’s Boutique and meet up with allies including the medication loving Dr. Strangewayes.

Series Description:
Against the political stage of 1689 Port Royal, Jamaica, the unswerving Atia Crisp is thrust into the world of bondage, violence, beauty and love. Shipwrecked and sold into slavery with her sister Livia, the pair are soon separated and Atia is used as a pawn in a card game. Captivated by her beauty, Atia is swiftly liberated by sugar merchant, Capitaine la Roche (also known as the pirate, Gator Gar), whose past is stained with blood and grief. La Roche works with a network of friends and allies including local strumpet, Cherry Banks, Theodore Binge the card shark and the kindly, medication loving Dr. Strangewayes. Soon Atia and la Roche are ushered away to safety after a mysterious outbreak of scarlet fever wreaks havoc on the city.

Within the luxuriant tropical confines of Dr. Strangewayes’s plantation at the foothills of the Blue Mountains, bonds of friendship are formed and the fierce love between Atia and Capitaine la Roche becomes absolute. Atia is reunited with her sister, piratical father and unexpected old friends. However, nowhere is safe as spies seek out both Atia and la Roche for the bounties on their heads. Neither of them can escape the shadows of their former lives and must rely on each other’s strengths for survival. Their journey leads them to an inevitable conflict that threatens their world, but inches them closer towards freedom.

No Quarter: Dominium – The Complete Series and No Quarter: Wenches – Volume 1 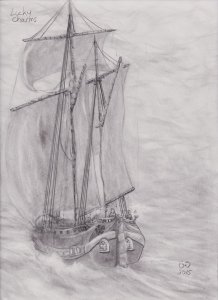 MJL EVANS wanted to be a writer since she was ten years old. Her motto – it’s never too late in life to get your act together and do something you really love. No Quarter: Dominium is her first book series and she currently writing the next, No Quarter: Wenches. Her sense of humor has been shaped by Monty Python, Black Adder and Red Dwarf, while her dramatic side has been influenced by independent/foreign movies.

You can connect with MJL Evans on Twitter at @artistmjlevans or noquarterseries@gmail.com

GM O’CONNOR is a huge movie fan, writer and visual artist. No Quarter: Dominium is his first book series and he’s busy writing No Quarter: Wenches. A lover of sci-fi and history, half his brain lives in the 17th century while the other half sails perpetually through space. He hopes to one day bring the No Quarter Series to film and/or graphic novel format.

You can connect with GM O’Connor on Twitter at @gm_oconnor or noquarterseries@gmail.com