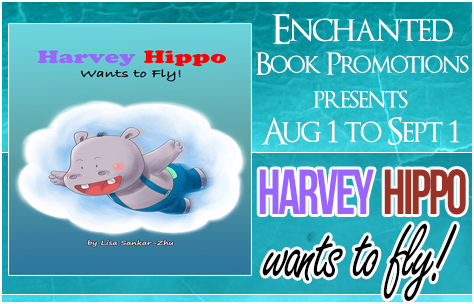 Harvey Hippo Wants to Fly!” is one of the three books that I have written so far.  Before I began writing my first book, I had never considered becoming an author.  But I am thrilled that I can now add writing books to the list of things I do and enjoy.  “Harvey Hippo Wants to Fly!”  is not just another picture book.  It is the first of the Harvey Hippo series of picture books, which are only one part of the entire Harvey Hippo brand.  This brand is to include a TV animation series for preschoolers, and a range of ancillary products, including toys and apps.

What inspired you to write Harvey Hippo Wants To Fly?

Inspiration for Harvey Hippo stories can come to me from anywhere and everywhere, from around and within me.  My experience and imagination play a great role in the creative process.  For example, when I was a child, I would sometimes wonder what it would feel like to fly, and would imagine myself soaring like an eagle over plains and mountains.   My memories of those virtual flights, which remain vivid in my mind to this day, contributed to the idea for “Harvey Hippo Wants to Fly!”.  However, Harvey Hippo has a personality and will all his own that dictate the flow and final outcome of his stories.  When I write, I allow Harvey to control the direction in which his stories flow, and enjoy doing so because I never know what is going to happen next.  I like that kind of unpredictability in the creative process.

Did you create the illustrations yourself? How did you go about that?

When the idea for the Harvey Hippo property was born, I had a fair idea of what Harvey would look like.  But, short on drawing skills, I found it difficult conveying this image to  the artist that I contracted to do the illustrations.  After a long process, we finally got the design right.  Having got past that hurdle, we were able to work out the style and designs for the other characters, and the backgrounds with a lot less effort.

It is my hope that parents would read “Harvey Hippo Wants to Fly!” with their children, and actually find it a fun read.  From the many, positive reviews that I have had from adults who have read the book, it seems like I have accomplished my goal.  But writing to achieve this was not easy.  In fact, it was perhaps the most challenging aspect of writing this book.

I really enjoy writing Harvey Hippo stories, so much so that at the beginning of the year,  I set my writing goal to one Harvey Hippo story per month.  I soon realised that this was not a realistic target, given the number of other things in my personal and professional life that require my attention.  Now, I’ve reset my goal to six books for 2016.  Having completed three, and with another few months left in the year, I think I just might achieve this new goal. 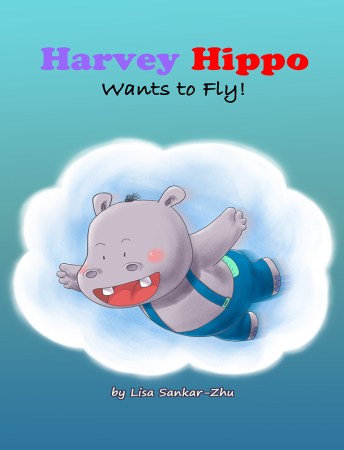 But no one knows why.

No matter, he is determined to try.

But can he REALLY do it?

Lisa Sankar-Zhu is from the Caribbean, but lives in China where she runs her business Golden Mushroom (Henan) Cultural Industry Company Limited.  The first book she published, an illustrated Chinese fairy tale, was presented as a state gift by the prime minister of Trinidad and Tobago to the President of China, in 2013.  Currently, she is developing a few intellectual properties for the Chinese market and the rest of the world.  If you ask Lisa Sankar-Zhu what she does best, she would answer that it’s being herself, because she’s been doing it all her life and, therefore, has become pretty good at it.

Currently the book is available on Amazon Kindle and the iBooks Store.