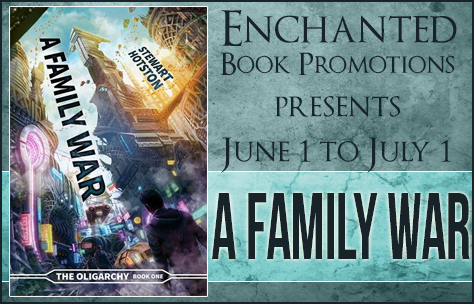 I’m hosting an interview today with Stewart Hotston, author of scifi novel “A Family War”. Thank you for answering my questions!

Half way through my PhD. A friend of mine asked me, out of the blue, to write a story for an anthology he was putting together. My story was genuinely terrible. But I was hooked on creating new worlds and the people within them from that moment. A few years later, having written my first novel (which was also terrible – although I still believe in the story itself) another friend who was an editor sent me an open submission window. I wrote something, submitted and was accepted. That was when I thought that if I worked hard on my craft, the stories I believed in were worth sharing with others too.

What inspired you to write A Family War?

I read a book on the Holocaust by Martin Gilbert. It was devastating and forced me to think through the circumstances around it. I wanted to explore how a society could approach such an event, what could lead to it happening again. The sci fi element comes from my background – I’m a theoretical physicist by training so have always found science fiction that uses a mcguffin to save everyone or explain the unexplainable as irritating to read and enjoy. I wanted to use a speculative setting to explore a sensitive subject (which explosions and running about) and so decided having a hard science fiction setting as the background was the obvious choice

An unhappy necessity. Unhappy because when I edit I realise just how much the early drafts need restructuring, tightening and generally weeding out. Necessity for the same reasons. When I have editors looking at my work, I take the view that they’re independent eyes whose job it is to make my book better. I nearly always look to see if I can agree with their comments and if not at least understand why they think they’re important enough to make.

Writing a female character. Helena is old, more than a century old. She is used to power, wealth and living a life of being perpetually young. Yet she is also distinctly gendered as a woman. I am a fairly boring straight man, so I worked hard to try to think about how she might think and feel inside.

Yes, I have one book to finish and two to edit for submission. I have one novel with a publisher at the moment and I’d love to see that one accepted as well. Besides that I am editing an anthology for the small UK press, Alternative Realities, run by Matthew Sylvester. It’s called Summer’s End and explores the beginning of the end of great civilisations, not the actual final collapse but the events which lead to the point where people know they’re not going to get better. Think of when the Elves of middle earth knew their time was over, or when the people of Angkor Wat knew the jungle would reclaim their cities but that it hadn’t done so yet.

I am currently working on the edits to the sequel to A Family War, called A Corporate War. I am also working on an entirely unrelated novel about a man who can’t be hurt who discovers a daughter he never knew he had only after she’s kidnapped. It’s about what he is prepared to do to find her and keep her safe.

Helena is one of the Oligarchs, genetically-enhanced, centuries old families who rule the world. As a new world war begins, she is ordered to find a boy who could save the human race from genocide. Yet all is not as it seems; Helena’s finds enemies on all sides, intent on bringing about the war with all its horrific consequences. To make matters worse, Helena’s own integral AI, accidentally freed from its constraints, challenges both her motives and her identity, yet she has no choice but to accept its treacherous aid if she is to have any hope of surviving those who need her dead.

Stewart works in the city but was once a quantum physicist who always liked his science fiction to have actual science in it as well as the thrills and characters that make great stories. Oh, and he likes fighting with actual steel swords.