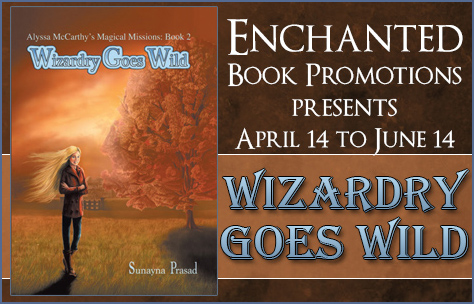 1)   Was it more difficult to write the sequel than to write the first book in your series?
Definitely! It was incredibly difficult to get enough backstory and make the novel stand on its own. Several editors and readers have told me that the way it had been executed required the person to have read the first book prior. It also took me nearly 3 years to complete while the first book took about a year and three quarters.
2)   How many books in your series do you have planned?
Right now, seven.
3)   Which character do you enjoy writing about the most?
My main character and her godfather/legal guardian.
4)   Did you set any writing goals for 2016?
I want to push myself to keep writing. I haven’t been on top of it as much as I used to.
5)   Are you working on something at the moment?
Yes, the first draft to my third book in this series.

After months of living a normal life, thirteen-year-old Alyssa McCarthy faces magic again. Only this time, though, she is cursed with it, thanks to an old depressed skeleton named Errol. Alyssa’s time with her godfather, Alex, will never be the same again, as she can perform sorcery, but never control it.

From letting out enchantments at school to creating outdoor disasters, Alyssa is bound to face consequences. She can only get rid of her powers if she can boost her confidence levels and improve her bravery. But it’s not as easy as it sounds. She must measure those abilities with a special device called a skillometer. Will she be able to get rid of her unwanted wizardry?

Sunayna Prasad is a college student studying art. In her free time, she likes to write fiction. She is also the author of From Frights to Flaws, which is the first installment of the series, Alyssa McCarthy’s Magical Missions. Sunayna lives in New York with her family.

Buy Alyssa McCarthy’s Magical Missions Book One: From Frights to Flaws on Amazon