All Them WoW Achievements

Yes, yes, two WoW posts in a row, I know. I just couldn’t stop myself. I’m studying for finals now, which means I barely find time to write, what with spending most of the day with my nose buried in books already (and not for fun, unfortunately). Whatever spare time I do have, I prefer not to spend working (and writing is a FUN job but it’s still more of a job than watching TV or playing video games), so I spent it playing WoW.

Anyway, here are my achievements and progress. 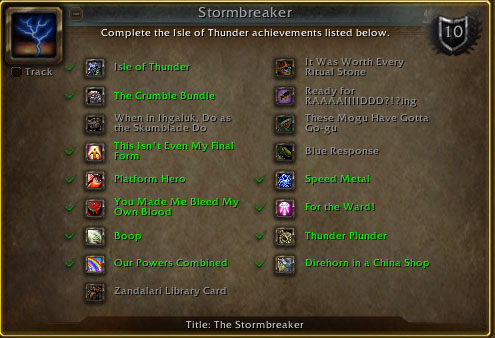 Some progress on the Stormbreaker achievement on the Isle of Thunder, as I finished Speed Metal, For The Ward! and Direhorn in a China Shop. The last one was the toughest. The direhorn reset a few times when I tried to kite it, but it worked after three tries.

I still think it’ll be a while before I’ll have this meta, since Blue Response is random – I’ve been camping the site for hours, and I still need a ton of ritual stones for It Was Worth Every Ritual Stone.

I bought the Legion expansion (yes…crazy how I hadn’t done that yet, right?) and rolled a level 100 Alliance with the boost, a Draenei Shaman.  This gave me Double Agent, an achievement I’d been eyeing for a while. I’ll use the Alliance with a few other achievements too, soon.

By the way, is it me or does anyone else think those Alliance garrisons look way better than the Horde ones?

Glory of the Pandaria Hero 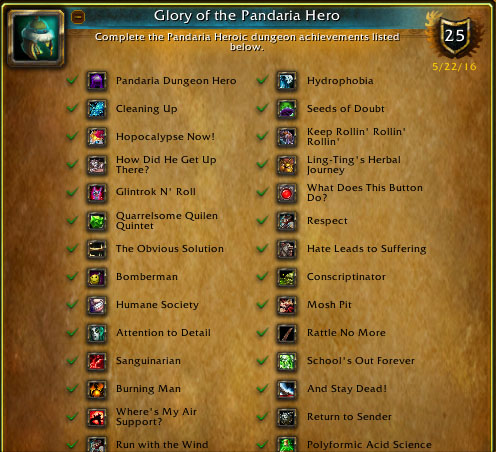 I still needed three achievements for Glory of the Pandaria Hero. When someone on trade chat was looking for people to join his group for School’s Out Forever, my boyfriend and I joined. With two more players, we finished up the achievement easily. The only ones I had left then were Polyformic Acid Science and Cleaning Up, both of which were fairly easy with the two of us. We only needed one Polyformic Acid potion to complete the achievement. 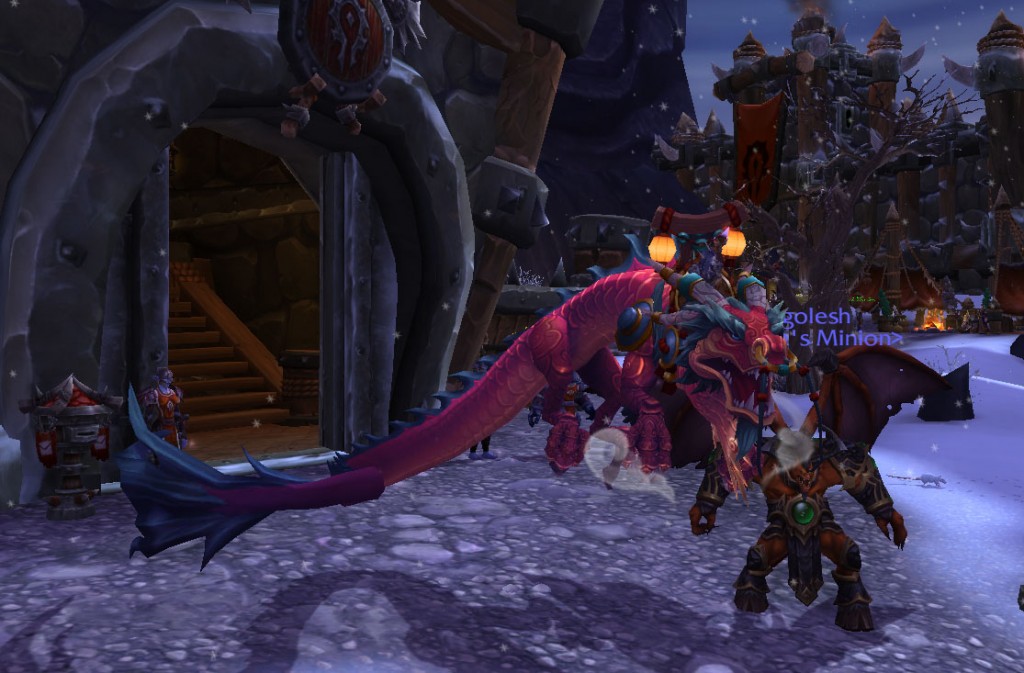 Now, thanks to the achievement, I’m the proud owner of a Crimson Cloud Serpent.

Glory of the Hero 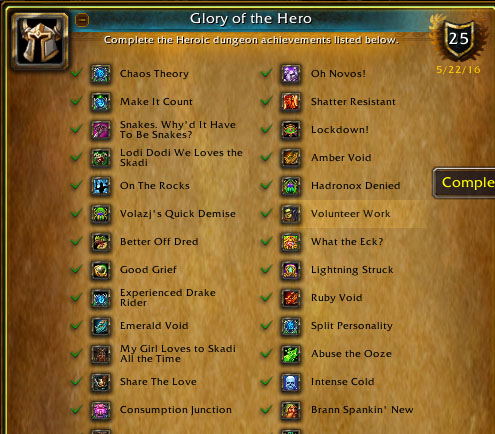 Glory of the Hero was another achievement long overdue, simply because we never found people interested in completing Share the Love, the only one I still needed, minus Experienced Drake Rider (easily soloable, I just didn’t want to do it until I had Share the Love), but Sunday, we finally did find a group for it. 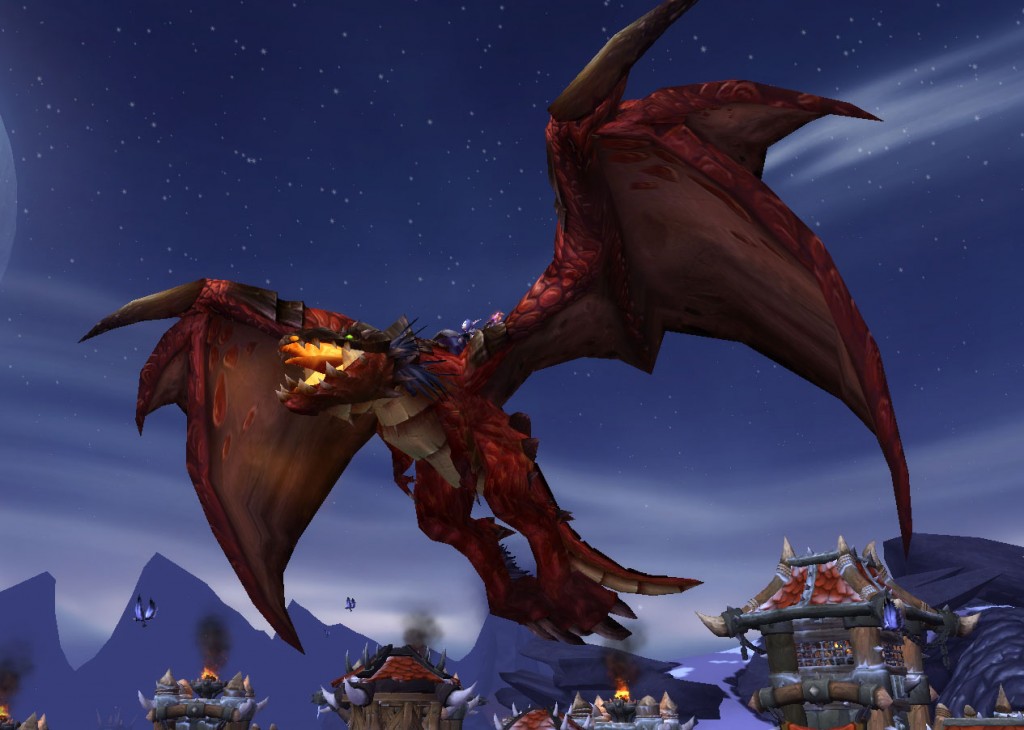 And here is a picture of me on my other new mount, the Red Proto Drake. 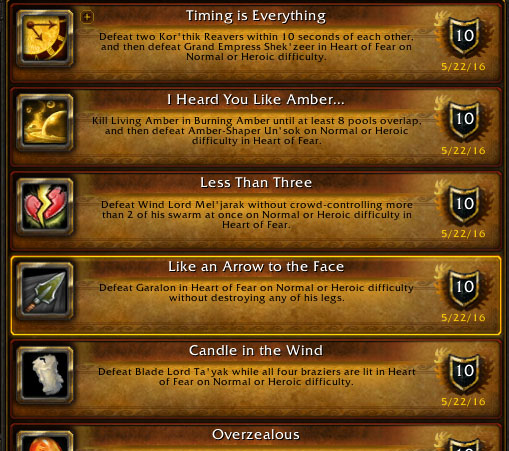 Last night, six of us teamed up to complete the Heart of Fear raid, 25 normal, achievement run. I’m proud to say we got all the achievements. The toughest one was I Heard You Like Amber… Apparently, because of a glitch. Either way, we had to try that achievement about five or six times before we got it, while we got the others in one go.

Now we need to clear it once more on heroic next week, and then we can move on to our next Pandaria raid. 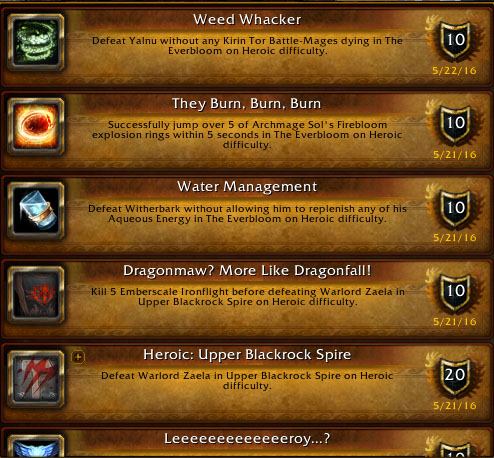 Since last week offered a bonus event for reputation by running Draenor dungeons, we ended up running a few of time. When we realized we got achievements quite easily, we started doing achievement runs. That showed that NOT all achievements are so easy to achieve, haha.

For the remaining achievements, we need one more in Iron Docks, two in Auchindoun, two in Grimrail Depot, three in the Shadowmoon Burial Grounds, and two more in Upper Blackrock Spire. We plan on doing some more progress tonight.

With all the excitement, I forgot to check how many mounts I had. Then suddenly, the We’re Going to Need More Saddles achievement popped. 150 mounts – well, 151 now, with the pandaren kite you get from the achievement.

To celebrate getting all the achievements, I’d treated myself to a rather expensive gift last week, as you can see on the second achievement. A traveler’s tundra mammoth. Boy, that is one useful mount, with a fixer and vendor attached. 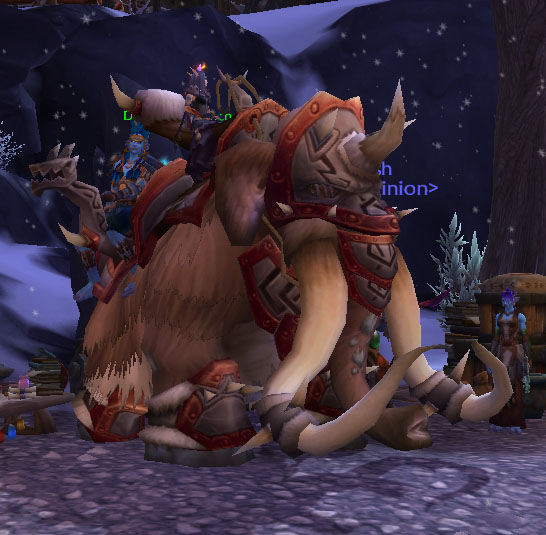 Pebble is now at 6/10 and he’s not up today (again! third day in a row), I need one more NPC for Over Their Heads, I need five more Shado’Pan NPCs for Getting Around with the Shado-Pan, I finished Know Your Role, and made progress on getting my reputations to exalted by running Draenor Dungeons. No progress on Ulduar as of yet.

My plans for the rest of the week: