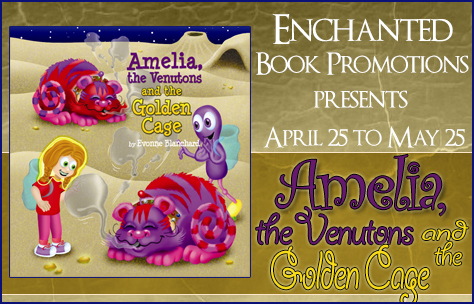 Please welcome Evonne Blanchard to my blog today! Thank you, Evonne, for answering my questions.

When I was eight, I had a vague idea of being a writer.  I wrote stories and poems.  At eleven I wrote and illustrated a book set in a boarding school.  I still don’t know what happened to that first book! But later on, I ended up studying business and languages at college.  My twenties flew by with study, work and travel.  Then in my thirties, especially with the birth of my daughters, that urge to write grew stronger and stronger.  So, I embarked upon, ‘Amelia’s Amazing Space Adventures,’ a series of ten set in outer space, for children ages 5-9.

‘Amelia, the Venutons and the Golden Cage,’ is the second book in the series.  Primarily, I really wanted to make outer space and the solar system entertaining and interesting for kids.  That was my inspiration for writing the whole of, ‘Amelia’s Amazing Adventure series.’  Obviously I take a lot of artistic license with all the crazy aliens and events that take place.   But children also learn about the moon, the sun, planets and the asteroid belt along the way.  So there’s also an educational element to the series.

Well, after I finish writing a book, I edit many times myself.  Sometimes I leave the book for a month or so. Then it feels fresh.  And I edit it again and again.  After that I have the assistance of two wonderful editors who help me get it to the final stage.

That’s a tough one.  I really like both Amelia and Uglesnoo.  Amelia’s such a clever, strong girl. And she becomes an explorer!  And even if she has doubts and fears, she faces them and carries on.  I think that’s a really good message, especially for young girls. Uglesnoo, her alien friend from Pluto makes me laugh.  He’s a daredevil, a little crazy but a good and loyal friend.  I also really enjoy the Venutons (the large cat-like alien creatures that live on Venus in the book).  They’re naughty, but they do have a certain style!

Well, I’ve written all ten books in the, ‘Amelia’s Amazing Adventure Series.’  The first two, ‘Amelia, the Moochins and the Sapphire Palace,’ and ‘Amelia, the Venutons and the Golden Cage,’ are published.  My writing goal for 2016 is to finish all the editing for the remaining eight books.  That will definitely keep me busy!

I’m working on the third book in the series, ‘Amelia, the Merballs and the Merabel Catapult.’  I’ve written the book already, but there is still quite a bit of editing to do.  Amelia’s and Uglesnoo’s quest continues on Mercury.  The Merballs-the aliens that live on Mercury-are friendly…until an asteroid hits their planet.  Amelia and Uglesnoo find themselves accused of treachery?  How will they manage to collect the flying shoes they need, leave Mercury and continue their quest on time?  You can find out in the next adventure!  For more details about the books you can visit my website at: www.ameliasamazingspaceadventures.com 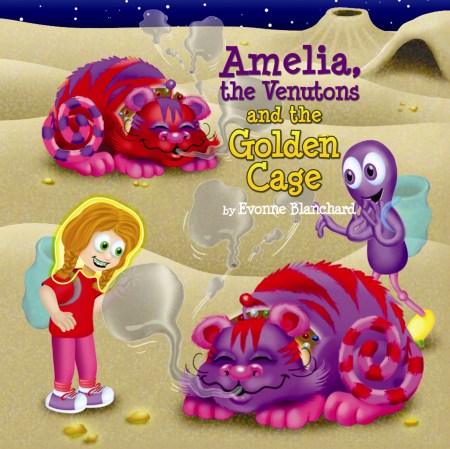 Title: Amelia, the Venutons and the Golden Cage

Uglesnoo needs Amelia’s help.  His sister is very sick.  The only cure is a repelling crystal from Neptune.  With his Earthling friend, Amelia, they must continue their quest.  More items are needed to buy the crystal.  But Venus is full of danger and angry aliens.  Are Uglesnoo and Amelia in over their heads? 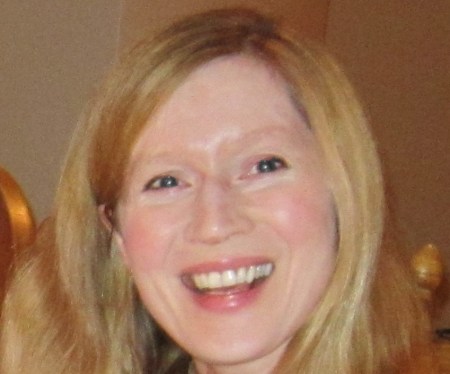 Evonne Blanchard was born and raised in England.  She has also studied and worked in France.  She met her husband, an American whilst they were both volunteering at a children’s orphanage in Guatemala.

She resides in the North Shore (Boston, Massachusetts) with her husband and their two daughters, Lydia and Gwendolyn.  Other additions to the household include a naughty dog called Lola, a lovely cat called Arthur, two hamsters (which they are careful to keep out of the cat’s clutches) and lots of fish!

The author is currently working on book three of the series, ‘Amelia, the Merballs and the Merabel Catapult.’

To preview or buy the book, click on the link below:

To learn about the book and the series, visit my website at:

For posts about Amelia’s Amazing Space Adventures and Fun Space Facts, visit my Facebook site at: