I’m back to playing World of Warcraft. YAY. WoW is the one game I can’t seem to quit, even when I want to. Sure, I can stay away from it for a few months, by not renewing my subscription, but I always get back to it. There are some fun times ahead for WoW players, as we’re eagerly awaiting the release of Legion in August, and the Warcraft movie on June 1.

More about the movie later, but first: my progress.

I’ve been doing some legacy raids and achievements on my main (warlock), along with some friends, and it’s a blast. Old content has never been so easy, and although we’re still waiting for most of the mount drops, this means we got a ton of achievements, increased reputation with some factions, and mostly just had fun. I’ve also made progress on LFR, and the legendary quest for the ring. I have about one week of grinding Elemental Runes left to go before I can turn it in, and start working on the tomes.

Veteran of the Molten Front 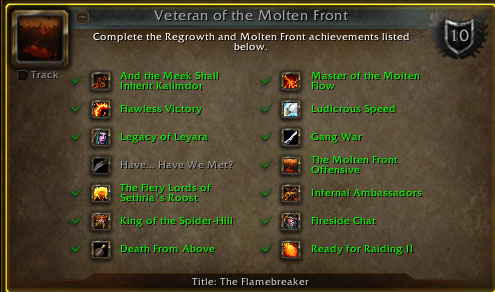 I started working on the Veteran of the Molten Front achievement, and after a few weeks, I have all but one achievement needed for the meta. Ready for Raiding II took a while, and I’ve spent most of the time grinding for Marks of the World Tree to finish off The Molten Front Offensive. But Have… Have We Met? is the most annoying WoW achievement ever. Well, maybe not ever, but with almost no one doing these quests anymore, it’s near impossible to find the two NPCs I’m missing, even though I’ve been lurking around Sethria’s Roost for ages. 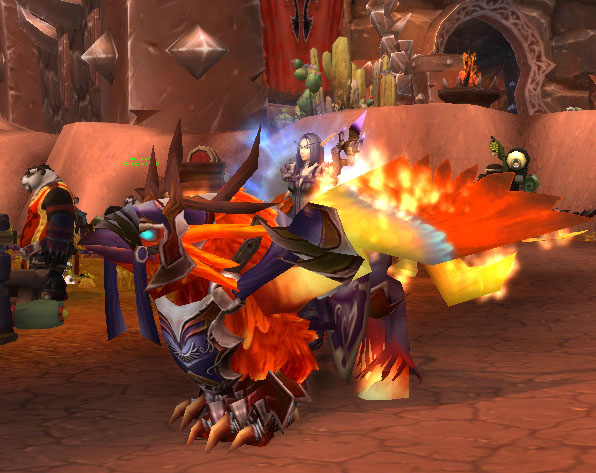 That means I also got my Flameward Hippogryph. He looks so colorful! 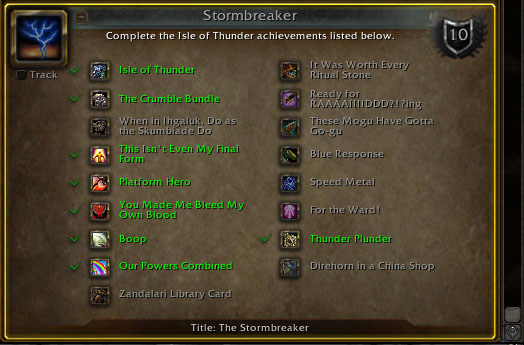 Once I *almost* finished Veteran of the Molten Front, I got slightly bored, now I didn’t have to do those dailies anymore (just lurk around in Sethria’s roost and pray to Cthulhu. I already had a few achievements for Stormbreaker, so I decided to try and get that title.

I was quite surprised how easy The Crumble Bundle was now. I expected that, even though I was level 100, it would still take a while running back and forth. I did one trial run, where I just located the parts of the chamberlain, and would’ve made it in time had I not freaked out because I wasn’t sure where to turn in the quest. I had no idea it was in the cave BELOW the temple in Court of Bones, so I had to retry, but then I got it without any difficulties. For anyone still working on the achievement, I recommend just doing a trial to find out where all the parts are at, and then doing the achievement for real.

Platform Hero was easy enough too. There’s a simple trick by just standing on the edge of the platform, waiting a few minutes, and then jumping. Our Powers Combined was easy too.

I also checked a few times for When in Ighaluk, Do as the Skumblade Do, but only found the adult form of Koshrik so far. Also working on It Was Worth Every Ritual Stone, but as every WoW player knows, those stones don’t drop in tons. I finished two off the list so far, leaving me with four total since I’d done two during the Pandaria expansion.

For These Mogu Have Gotta Go-gu, I only need Vu still, but the incantation hasn’t dropped yet. I haven’t tried Speed Metal, For the Ward or Direhorn in a China Shop yet. I did try Blue Response but after farming for an hour and still seeing no blue bird, I called it quits. Maybe another day.

I got 700 skill points in archeology two days ago, and I’ve been grinding on some of the archeology achievements ever since. For anyone also looking to do the achievements, I recommend the addon Archy. It’s really useful.

Ring of the Kirin Tor

If you still need to complete the achievement Ring of the Kirin Tor, now is the time. The ring costs 6,800g BUT you can sell it back to the vendor within two hours after purchase AND get your money back while keeping the achievement. I did this the other day and can confirm it works. I’m now the proud owner of this achievement, with still enough money left to FINALLY buy my mammoth. 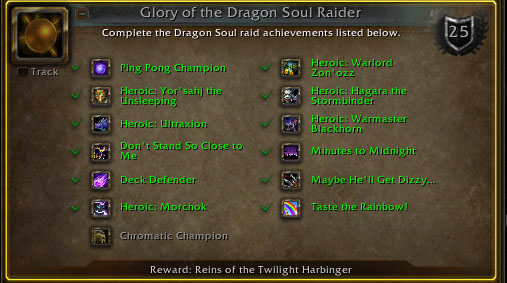 I needed about three more achievements for Glory of the Catalysm Hero, and finally completed them, so now I’m the proud owner of the Volcanic Stone Drake (and ALMOST 150 mounts total). I also made progress on Dragon Soul. We did an achievement run, and got all the achievements minus Chromatic Champion, which takes four runs. I’ve done two now, and am going to do one more this week, and should have the achievement hopefully next week. 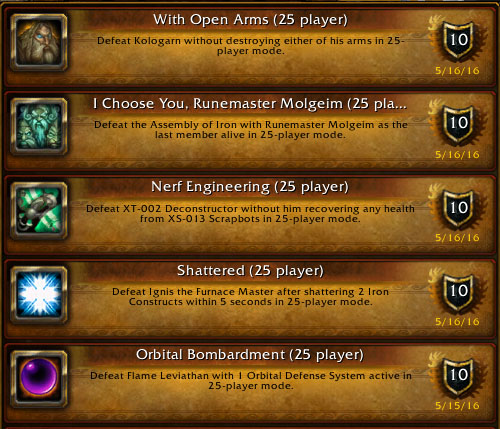 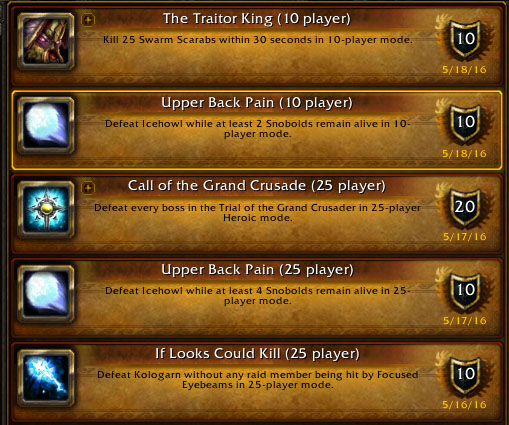 I also finished up a bunch of Lich King raids achievements, mostly in the Trial of the Grand Crusader and Ulduar. I still need a few achievements to get the Ulduar 25 meta achievement, though, but I hope to get it soon. 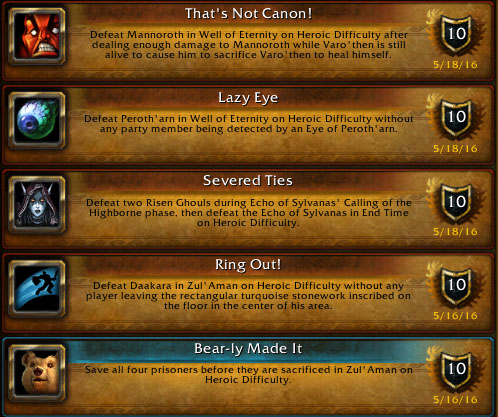 In Cataclysm, we finished the last few achievements we needed in Well of Eternity and End Time, and made progress on the Zul’Aman achievements and Zul’Gurub. The only achievement I still need for Cataclysm dungeons in Hex Mix in Zul’Aman, so with some luck, I’ll have that soon too. 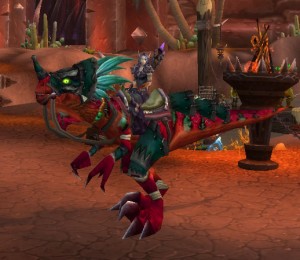 Also, I got this beauty in Zul’Gurub. The rare drop Armored Razzashi Raptor. Isn’t he a cutie?

I also made progress on the Scale of the Sands reputation. If all goes well, I’ll be exalted next week.

My plans for the rest of the week are:

Looking at that list…It might take a week or two to complete it, haha.

Why You Should Watch Warcraftt

I have no idea if the Warcraft movie will be good – I hope it will be, but I can’t predict the future BUT if you go, you’ll get a free WoW battle chest, so the base game, TBC and WotLK, Cataclysum and I think Pandaria too, so basically all expansions up until Draenor, and one month free game time.

Soooo…you should go watch it. A ticket costs like 10 euros, and that battle chest and one month game time far exceeds that.