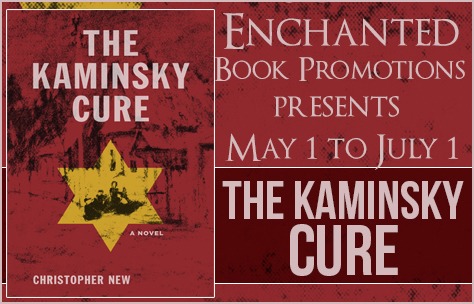 When did I know I wanted to be an author? I wrote poetry when I was a teenager (who doesn’t?), but I don’t think I knew I wanted to be an author until I was an undergraduate at Oxford. I still wrote poetry, but it was terrible stuff and fortunately none of it was published.I wrote my first longish short story while I was at Princeton. It survives in part in a novel that I have yet to complete which is set in the UK. Since then I have always oscillated between novels and analytic philosophy. It is always refreshing, when I have completed one mode of writing, to turn to the very different other mode. However, in the last few years I have concentrated on novels.

What is my editing process like? It would be endless if it weren’t for publishers setting deadlines. I edit everything I write many times, right up to the time the book goes to the printer. And when I look at some of my previous published books, I have to resist the urge to edit them.

Who is my favourite character in The Kaminsky Cure? In one sense I don’t have one – I enjoy moulding each character as well as I can. But in another sense – which character would I like best in real life? – I think the answer would be Sara, the daughter closest both to her mother and to the narrator. That’s perhaps why she will have a larger role to play in the sequel.

What inspired you to write The Kaminsky Cure? Years ago I came to know  people to whom all this happened. I have invented all the characters, but the events in the novel have exact historical counterparts.I always wanted to write the story, but it was not until recently that I felt able to do it. Another incentive was that almost nothing is written about the fate of mixed Aryan-Jewish families during the Nazi period.

Are you working on something now?  I’m revising a novel called Chinese Spring. I’ve spent many years in Asia (and still do spend time there), especially in Hong Kong, where I taught philosophy, and several of my novels are set in Asia. This novel is set in Hong Kong and Mainland China during the single year from June 4 2012 to June 4 2013 (with a prologue and epilogue for earlier and later years). As  you will probably have guessed, that means the background is the fall-out of the Tiananmen massacre of June 4 1989. The story concerns democracy activists in both mainland China and Hong Kong, although I wouldn’t describe it as a political novel. It’s about people’s complex lives in a particular context at a particular time. That’s nearly finished. Apart from that, I’ve started a sequel to The Kaminsky Cure, which takes the characters, or some of them, to America and follows their diverse fates there.

My writing goals for 2016? Quite definite. First, finish Chinese Spring. Second, get on with the sequel to The Kaminsky Cure. Then, further down the line, there are novels that are in various stages of completion, which I have left while I finished writing other things. I find it’s good to leave a draft for several months before returning to it with fresh eyes. (Some of them have been left for years.) I look forward to getting back to them, some of which are quite different from what I’ve written before – that prospect exhilarates me.

The Kaminsky Cure is a poignant yet comedic novel of a half Jewish/half Christian family caught up in the machinery of Hitler’s final solution. The matriarch, Gabi, was born Jewish but converted to Christianity in her teens. The patriarch, Willibald, is a Lutheran minister who, on one hand is an admirer of Hitler, but on the other hand, the conflicted father of children who are half-Jewish. Mindful and resentful of her husband’s ambivalence, Gabi is determined to make sure her children are educated, devising schemes to keep them in school even after learning that any child less than 100% Aryan will eventually be kept from completing education. She even hires tutors who are willing to teach half-Jewish children and in this way comes to hire Fraulein Kaminsky who shows Gabi how to cure her frustration and rage: to keep her mouth filled with water until the urge to scream or rant has passed.

Christopher New was born in England and was educated at Oxford and Princeton Universities. Philosopher as well as novelist, he founded the Philosophy Department in Hong Kong University, where he taught for many years whilst writing The China Coast Trilogy (Shanghai, The Chinese Box and A Change of Flag) and Goodbye Chairman Mao, as well as The Philosophy of Literature. He now divides his time between Europe and Asia and has written novels set in India (The Road to Maridur), Egypt (A Small Place in the Desert) and Europe (The Kaminsky Cure). His books have been translated into Chinese, German, Italian, Japanese and Portuguese. His latest novel, Gage Street Courtesan, appeared in March 2013.