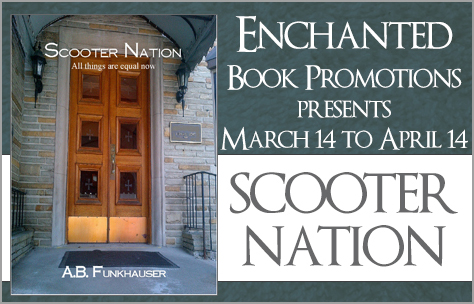 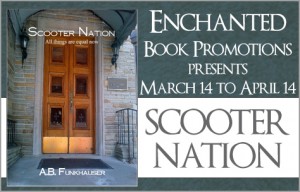 When my “sister in writing” Cryssa Bazos told me I should. We have known each other for over two decades and I knew she was working away on her 17th Century historical fiction novel, so I shared a few lines. She was super encouraging, got me signed up with the Writers Community of Durham Region and through it, found the word weavers at Writescape. They told me that I had some good things going, but also encouraged me to study and learn HOW TO WRITE. One year and a few courses later, I had a manuscript, and that’s when the real work began.

What inspired you to write Scooter Nation?

Once I’d found my voice with the first novel, HEUER LOST AND FOUND, it just made sense to keep going. My fictitious funeral home, Weibigand Brothers, turned out to have a very rich and varied history. I found this out through the first book tour I did. One question led to another, compelling me to flesh out a back story that went all the way back to 1937. Why quit there? I thought. SCOOTER NATION actually ends in 2017 and is interspersed with flashbacks that have fueled books three, four and five. You see, writing is a very organic thing for me. The characters take charge and I follow. I love the mad house places I wind up in.

I love it because I keep it in reserve until the summer months. After all danger of frost has passed, I move outside into the backyard, where I have a whole outdoor office set up. It’s wild. Surrounded by nature and warm air, it’s a pleasure going to work. Of course, it helps that I edit as I write. I also workshop my chapters through the writers group I belong to, THE BROOKLIN SEVEN. By the time summer rolls around, I’m on round three edits where I can see the story getting richer, fuller. It really is a journey that I love taking over and over again.

Jocasta Binns is complex, wicked, sad and full of longing. If her life had gone a little better (and I explore that in depth in the fourth novel POOR UNDERTAKER) she could have accomplished great things. But she is stymied by an obsession and guilty conscience back filled by a belief that Fate has cheated her. Her background is rich with classical teachings, so it follows that she would have been named after the Theban Queen from Oedipus and would almost deliberately make different but equally tragic mistakes. Every time Chance intervenes and she is presented with a choice equally weighted by things good and bad, she will almost always take the path less traveled as if she deserves it. Interestingly, Jocasta appeared in the first novel as a cardboard cutout bad guy. Like Scooter and Carla, readers were really grabbed by her and wanted to know more. So did I, it turns out!

Every November, I flesh out a new manuscript under the auspices of NaNoWriMo, so it’s with great excitement that I prepare to finish my NaNo 2015 during the month of April, which is another NaNo designated writing month. Having a designed time of year to create new work and NOTHING ELSE is incredibly freeing. Oftentimes, we bog down in promotions (which are crucial and can’t be ignored) edits and blogging. These are all essential tasks, but it’s important to writer health, I believe, to keep producing new things. Keeps us fresh, excited and endlessly optimistic. My two cents, anyway.

Yes. The link to my current WIP is right here http://abfunkhauser.com/wip-shell-game/

It’s a #dark #whodunnit as seen from the pov of Carlos The Wunder Cat. Based on the comings and goings of Kobe, a shared community cat, it was easy to run off the rails into all kinds of crazy directions. It helps that he is my most steadfast and reliable muse as you see here: 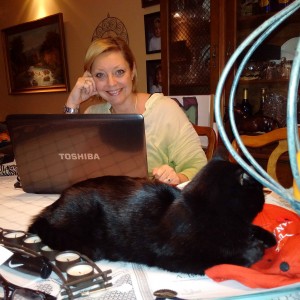 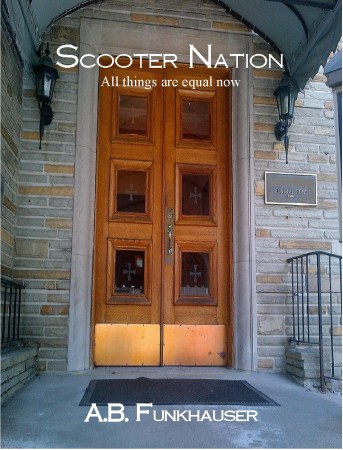 Aging managing director Charlie Forsythe begins his work day with a phone call to Jocasta Binns, the unacknowledged illegitimate daughter of Weibigand Funeral Home founder Karl Heinz Sr. Alma Wurtz, a scooter bound sextenarian, community activist, and neighborhood pain in the ass is emptying her urine into the flower beds, killing the petunias. Jocasta cuts him off, reminding him that a staff meeting has been called. Charlie, silenced, is taken aback: he has had no prior input into the meeting and that, on its own, makes it sinister. 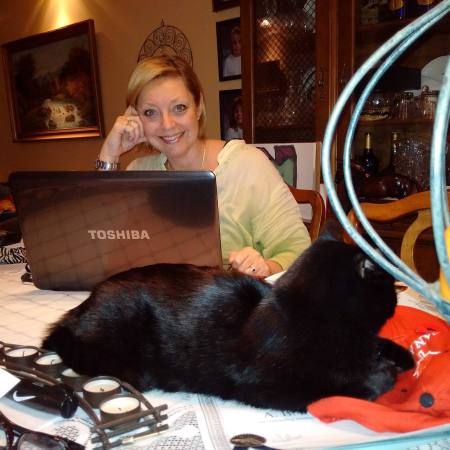 Toronto born author A.B. Funkhauser is a funeral director, classic car nut and wildlife enthusiast living in Ontario, Canada. Like most funeral directors, she is governed by a strong sense of altruism fueled by the belief that life chooses us and we not it. Her debut novel HEUER LOST AND FOUND, released in April 2015, examines the day to day workings of a funeral home and the people who staff it. Winner of the PREDITORS & EDITORS Reader’s Poll for Best Horror 2015, HEUER LOST AND FOUND is the first installment in Funkhauser’s UNAPOLOGETIC LIVES series. Her sophomore effort, SCOOTER NATION, is set for release March 13, 2016 through Solstice Publishing. A devotee of the gonzo style pioneered by the late Hunter S. Thompson, Funkhauser attempts to shine a light on difficult subjects by aid of humorous storytelling. “In gonzo, characters operate without filters which means they say and do the kinds of things we cannot in an ordered society. Results are often comic but, hopefully, instructive.”

Funkhauser is currently working on SHELL GAME, a contemporary “whodunnit” begun during NaNoWriMo 2015.

Other Solstice Books By A.B. Funkhauser

At last found, he is delivered to Weibigand Brothers Funeral Home, a ramshackle establishment peopled with above average eccentrics, including boozy Enid, a former girl friend with serious denial issues. With her help and the help of a wise cracking spirit guide, Heuer will try to move on to the next plane. But before he can do this, he must endure an inept embalming, feral whispers, and Enid’s flawed recollections of their murky past.

“Eccentric and Funny. You have never read anything like this book. It demands respect for the outrageous capacity of its author to describe in detail human behavior around death.”

“The macabre black comedy Heuer Lost And Found, written by A.B. Funkhauser, is definitely a different sort of book!  You will enjoy this book with its mixture of horror and humour.”

“This beautifully written, quirky, sad, but also often humorous story of Heuer and Enid gives us a glimpse into the fascinating, closed world of the funeral director.”

“The book runs the gamut of emotions. One minute you want to cry for the characters, the next you are uncontrollably laughing out loud, and your husband is looking at you like you lost your mind, at least mine did.”

“The writing style is racy with no words wasted.”

“For a story centered around death, it is full of life.”

“Like Breaking Bad’s Walter White, Heuer is not a likeable man, but I somehow found myself rooting for him. A strange, complicated character.”

Raw, clever, organic, intriguing and morbid at the same time … breathing life and laughter into a world of death.