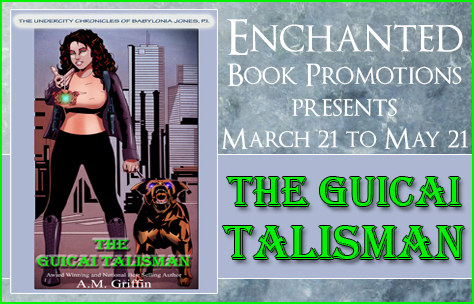 I’m interviewing A.M. Griffin today, author of urban fantasy “The Guicai Talisman.” Welcome, and thanks for answering my questions.

This calling has been with me from the very start. My mother is a writer and seeing her at her desk and on her typewriter was a staple in our house. I was always encouraged to write and to express my feelings through paper and pen. I’ve been writing stories all my life, but it wasn’t until 2012 that I actually finished one. Usually I’d feel the need to get the story out and after the first few chapters, I would stop. I really never felt a longing to finish any one story in particular. That was until 2012. I pushed (well, maybe that’s too strong of a word because the words flowed with ease from my fingertips) to finish Eva’s (Dangerously Mine) story. I wanted that character to have her happy ending and since I’m mostly a pantser, I didn’t know how her ending would end until the end (a lot of ends in that sentence lol). Ever since then I’ve been writing and finishing stories.

I was at a book conference and I saw this flyer of a woman with guns and the backdrop of the city. The picture on the flyer intrigued me so I tossed it in my bag and eventually took it home with me. I didn’t do anything with the idea immediately but her presence was always in the back of my mind. It took about a year for me to finish up other projects and clear my plate. I reached out to some of my author friends and got their input on the name Babylonia Delilah Jones and from there she took shape. The Undercity Chronicles of Babylonia Jones, P.I. is unlike any other series that I’ve written. It’s gritty, fast paced and chopped full of action. Baby (as her friends call her) is a kick ass heroine who has a gun and isn’t afraid to use it. While all my heroines have a special place in my heart, this one has definitely carved her name across it.

While I write on the fly, meaning I’m a pantser at heart. I’m very rigid when it comes to editing. In the first read through I make sure to bring the story together. To tie up or identify all the loose ends. I refer to this part as “to making the story less stupid” lol. Then I go through and add more emotion and action and the last round is reserved for grammar and spelling. It’s a long process but it makes me and my editor very happy.

My favorite character hands down in Babylonia Jones. I feel a connection between us. She’s caught between the human world and paranormal world and doesn’t feel she fits in either. She wants to be in the paranormal world, but unfortunately not everyone is welcoming her with open arms. When I write about her feelings regarding acceptance I feel more of a connection to her than with any other character. And I think acceptance is something that we all deal with at some point or another in our life.

I set many and luckily I’ve met every goal. I finished the third story in the Dark Wolf Enterprises story, the third story in my YA Cimmerian Moon series, completed my first ever contemporary romance and have completed 4 stories in The Undercity Chronicles of Babylonia Jones, P.I. series. My original goal was actually set in 2015. I wanted to finish all of my 2016 stories in 2015 so that I could focus on my 2017 stories in 2016. I intentionally wanted to write one year ahead. So far so good. Now ask me about this goal in 2017. LOL

Babylonia Jones’ story doesn’t end here. I plan there to be many more in the future. I have completed 4 stories so far, all set to release in 2016 and soon I’ll begin writing the stories to release in 2017. Since I have 4 stories already completed I know what happens, and I know how she gets out of all the crazy situations that she gets in, so I think the hardest part for me will be to not jump ahead, but to stay on one book at a time. What does a woman have to do to prove she belongs in the Undercity? Sure, I’m unclassed and only half paranormal, but that doesn’t mean I can’t solve cases. Since the established PI’s won’t acknowledge my right to a territory, I’m taking jobs from whoever will hire me, doing what I do best…proving myself to be a bad-ass problem solver. Which is how I find myself breaking into Zaid’s house, looking for a talisman my witch client says the very powerful vampire stole.

Now, I can make flowers grow, hear the wind’s whispers and talk to animals, but I don’t have the gift of seeing the future. If I did, I’d have known not to take this case. Because no matter the outcome, nothing good can come from messing with the Guicai Talisman, or it’s far too gorgeous guardian.

The next book in the series… 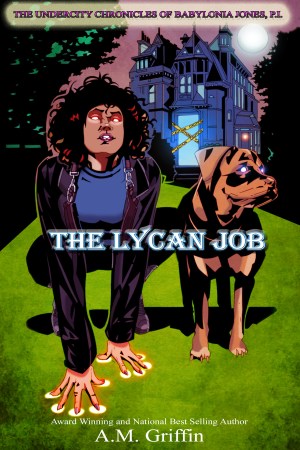 Being hired by the Alpha of the Lycan pack to solve the mystery of his son’s death could make my name as a PI in the Undercity—if it doesn’t get me killed first. Not only am I looking for a perp who obviously won’t hesitate to commit murder, but even before I get working on the problem I’m being threatened. That’s not going to stop me though. Neither is interference from Zaid, the hot Vampire who keeps popping up at the most inopportune times.

Yet this turns out to be anything but a straightforward case. I’m learning more about the workings of the Undercity than ever before, and what I’m finding out is pretty ugly. It’s making me question everything I thought I knew about the Houses, and what I’m missing by not being claimed by my father. But that may well be a question I won’t get a chance to ponder, because even tapping into every ability I possess might not be enough to help me survive the Lycan Job.

A. M. Griffin is a wife who rarely cooks, mother of three, dog owner (and sometimes dog owned), a daughter, sister, aunt and friend. She’s a hard worker whose two favorite outlets are reading and writing. She enjoys reading everything from mystery novels to historical romances and of course fantasy romance. She is a believer in the unbelievable, open to all possibilities from mermaids in our oceans and seas, angels in the skies and intelligent life forms in distant galaxies.

Where you can find me: