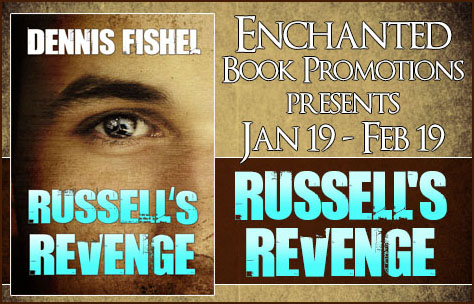 I think the initial idea that I wanted to write a book probably occurred when I was in grade school–third grade, maybe. I wanted to write a book about fishing, so I checked one out of the library, took it home, and began copying it in pencil, complete with illustrations. The word “plagiarism” hadn’t entered my vocabulary yet. I gave up after ten pages or so. My fingers were sore.

What inspired you to write Russell’s Revenge?

Russell’s Revenge was the product of needing something to write about as a project for the writer’s program at Lake Washington Technical College. The curriculum there required us to work on projects we’d have worked on if completely self-directed, with the added benefits of an instructor and a classroom full of ready and willing critics. I initially wanted to write for kids and some of my early-teen adventures seemed a perfect fit.

My editing process is simply to read my own work–over and over and over, using “different eyes” than a casual reader would in order to be more in the mode of self-criticism. I try to shorten sentences to make the narrative more concise and create a better action flow, to avoid the repetitious alliteration of repeating the same word in adjacent sentences, to check for spelling errors and consistency of phraseology as a part of characterization–and so on. It is an arduous process but actually one I enjoy, as opposed to many other writers who at least claim to hate it. In reality, though, I’m truly never totally satisfied with what I’ve created, even after it’s in print and on the shelves. I guess that just goes with the territory.

Jay is my favorite character in Russell’s Revenge. His persona is very real to me as it reflects that of my best friend as a 13-year-old, an irrepressible kid virtually always in trouble, and seldom if ever learning from his mistakes. Even though Russell’s Revenge is a work of fiction, each line and action of Jay Robbins’s in the book is like a journey backward through time for me. I do miss those days; it was great fun revisiting them as they reappeared on my computer screen.

There are always goals. God help me if I ever run out of them, for that will mean I truly am facing the final words of all of our stories: The End. I want to complete a murder mystery I’ve been chewing on for years by the end of this coming summer. I probably won’t be fortunate enough to be on schedule with it, but I’d at least like to be well into the editing stage by then. After that, the outline for the sequel to Russell’s Revenge, Russell’s Reward–which is already written–will be fleshed out as the next project, probably taking me well into 2017.

“Right now this very minute” the marketing of Russell’s Revenge must take precedence. My next Young Adult novel, The Treasure of Neahkahnie Mountian, is now in the final editing stages, however. In a couple of weeks, we’ll begin the process of finalizing the cover art and moving toward production and release. The latter should take place sometime around the end of April.

Fate has been messing up Dennis’s life for as long as he can remember. It was Fate that decided Russell Folmer—the biggest, ugliest, and meanest kid on earth—would live only two houses south of Dennis’s. Fate was also responsible for making Russell the same age and placing him in the same school. So who else but malicious Fate would arrange for Russell to be in the wrong place at exactly the wrong time when the bombs crafted from the only product a dog manufactures fell from Dennis’s experimental kite? Now, with dog dumplings decorating Russell’s extremely large and angry face, it looks as though Dennis’s days of successfully dodging the well-known bully are over. As the sound of Russell’s pounding feet gets ever closer, two questions flare up in Dennis’s panicked mind like neon in the blackness of a cave: What has he done to make Fate hate him so much, and how is he going to get out of this fix?

Owned and managed by dogs for most of his life, Dennis shares a home on Washington’s Olympic Peninsula with his four-legged boss, Sally. Together they pursue their interests in wooden boats, fly fishing, chasing down obscure historic sites, and hiking to remote places just for the fun of it.