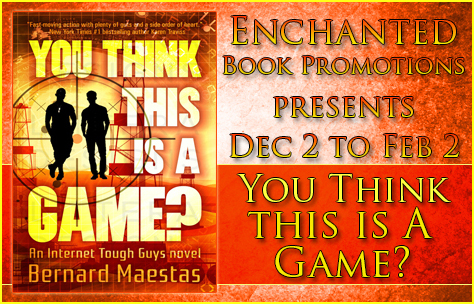 Today I’m interviewing Bernard Maestas, author of YA thriller “You Think This is a Game?” Please welcome Bernard to my blog!

Oh, man, I’m going to have fun answering this question.

It was about halfway through junior high when I really got hooked on the idea of writing prose. I’d been a reader, writer, and artist already at that point. Movies and comic books were my medium. I’d made some award-winning short films on my mom’s camcorder based on scripts I’d written myself and I had an epic graphic novel I was working on. I really thought I’d be a director who wrote comics on the side.

Then, I read “Ender’s Game.” It was one of the first books to really hook me and motivate me to tell my stories with just words. It also, surprisingly, taught me that there were books out there that were as good as the video games, anime, movies, and comics that I loved so much. That’s when I knew I had to add prose writing to me repertoire.

What inspired you to write You Think This is a Game?

It’s funny, the “Internet Tough Guys” series has always been a long and reaching story in my mind but “You Think This is a Game?” is actually a curveball I didn’t see coming. When I was writing the first two books, I was already seeing scenes, chapters, and story arcs for the third, fourth, and beyond.

I set out writing “Keyboard Commandos,” which is now set to be fourth or fifth in the series at the beginning of 2014. That’s a great story, let me tell you, but it wasn’t quite grabbing me as much as I had hoped. I also had some upheaval in my personal life at the time and, so, I needed an outlet and that book just wasn’t it. Then, one morning, I woke up and it hit me. I don’t think I had a dream the night before – which is where I get a slight majority of my material – but that morning, I opened my eyes and I started thinking about the foundation that would become this novel.

Everything fell into place from there. I got to move my characters along their track while they tackle yet another exciting new mission!

Editing? Ain’t nobody got time for that! Once I finish a novel, I never want to look at it again!

That’s only a slight exaggeration because I do feel like I pour so much of myself into each novel that, once I finish, I want to get away from it. I need to breathe. I’m fortunate to have a wonderful editor who works for my publisher that takes the manuscript off my hands there and cuts it to ribbons with her red pen (which she swings like a sword).

So, for my novels bound for publication, it’s generally a game of tag, shooting a Word doc back and forth using Track Changes to correct my grammatical errors and typos.

For my work that isn’t so fortunate, I’ve actually taken to hitting up the Goodreads beta reading groups to get opinions and notes on my manuscripts or chapters.

Of course, I love both of my heroes, Alex and Ted. They’re each like a little part of me that has grown up into his own living, breathing, fighting person.

In this book, however, I’m really proud of the three villains that I came up with. Known only by their codenames, Daemon, Duwende, and The Engineer were really fun to write. They’re fascinating, sinister, talented, and professional. They’re as much mirrors as they are opposites of Alex and Ted and they really make a great team. I sort of wish I had more time to explore them, their histories, their lives… Maybe a spinoff novel is in order!

Same goal I set every year. Try and take over the world!

2015 was less productive than I wanted it to be. Actually, so was 2014. In 2013, I wrote six complete novels from scratch. My goal was to top that in 2014 and I ended up with just two (though, as my readers already know, the upcoming “Concrete Smile” was written in a week!). Last year I really ended up with a bunch of stalled projects.

For 2016, I’m aiming high again, hoping for at least four complete books. Will it happen? Who knows! But, I can almost guarantee “Concrete Smile” will be in readers’ hands this year. I’ll also try my hardest to get a fourth “Internet Tough Guys” book out there but I do have a couple of other projects ahead of that in the queue (as I expand upon below). Guess the readers will just have to stay tuned in and see how that ends up!

As I mentioned above, I have a bunch of balls in the air. “Concrete Smile” is patiently shuffling towards the front of my editor’s queue and should be out this year. I have outlines for “Internet Tough Guys” four and five but those are on the backburner at the moment.

Sometimes I hate these questions because I’m always excited to share with my readers what I’m working on at the moment but things happen. Not every project shapes up the way I hope and most don’t see the light of day. That said, my top projects at the moment are a YA-urban fantasy-superhero mashup, a steampunk tale that might end up a graphic novel, a lit fic book about law enforcement, and, as always, I’m still hoping to find the right way to tell my magnum opus “The Republic.” Will it be prose, graphic, maybe an animated series? Still trying to figure that out.

Either way, there’s lots more to come from me. Count on it! 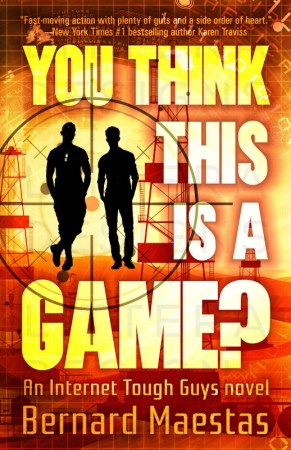 Title: You Think This is a Game?

Wisecracking smartasses Ted and Alex are an elite army of two, fighting for fortune under the banner of their private military corporation Reagan Kirwan International. MIT-trained computer hacker and engineer Ted is the brains. Freerunning ex-French Foreign Legion commando is the brawn. With their unique combination of skills, they are in high demand on the blurry and ever-changing modern battlefields.

When oil is struck in a Somalian province, two titans of the energy industry collide head-on over the lucrative rights. The result is a war which rages both in the boardrooms and on the already bloody sands.

Hired for the simple task of tipping the scales, Ted and Alex’s mission takes a dangerous and deadly turn. They learn they are not the only trump cards in play and, this time, they may be on the wrong side. Facing the most dangerous of adversaries, constant perils, and treacherous corporate politics, they must stand together if they want to survive – and, more importantly, collect their paychecks.

Because war is a two-player co-op and all they have is each other. 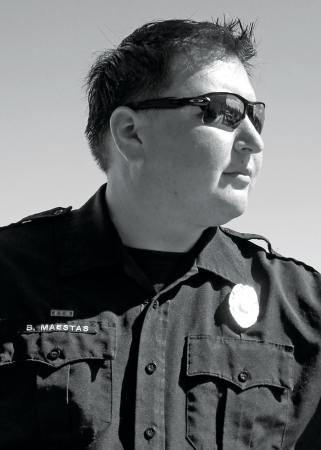 Bernard Maestas lives in paradise. A police officer patrolling the mean streets of Hawaii, he has a background in contract security and both military and civilian law enforcement. When not saving the world, one speeding ticket at a time, he can usually be found wasting time on the internet, playing video games — or both. Occasionally, he finds time to write books.