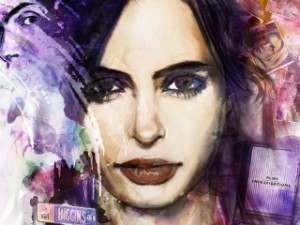 I don’t usually review a lot on this blog, but for the first season of Jessica Jones, I’ll gladly make an exception. I discovered this series last month, back when I was struggling with moving out and standing on my two feet, getting my driver’s license (which was just about the most stressful experience of my life), and I could use a kick-ass heroine who showed me you can do just about anything. I was about to get my Buffy DVDs back out, but fortunately, a new heroine jumped to the task.

Meet Jessica Jones. In a setting reminiscent of old noir detective movies, she has opened up her own detective agency, Alias Investigations, with a front door marked by a shattered glass window, a cramped apartment, and a desk stacked to the brim with bottles of alcohol. Jessica Jones is no superhero. She takes on cases to get some cash, and sometimes to help people, but she downs liquor like it’s soda, she curses and swears like a sailor, and she’s pretty much the anti-hero. She has one friend and one friend only, barely talks to people (definitely not a people person) and her humor is laced with sarcasm.

Yet, she’s not an anti-hero. Flawed though she is, this actually makes her more relatable. Despite looking tough and acting tough, she’s actually kind. She helps out her nextdoor neighbor, who is severely addicted to drugs, several times. She’s just a no-nonsense type of person, and the more we learn about her past, about what damaged her and broke her, the more it becomes obvious to the viewer why she’s the way she is.

This show does marvels with characterization. From the first episode, I was hooked. And not just on plot, or on the setting and vibe, all of which are great, but I was hooked on Jessica Jones. I wanted to know more about her. There are so many different sides to her personality. She’s mysterious, and you want to know more about her, about what happened to her to make her this way. Kristyn Ritter, the actress portraying Jessica, does an amazing job.

But equally as intriguing as this series’ main character, is the villain. David Tennant, an actor who I have more and more respect for every time I see him on screen, does an admirable job portraying one of the wickedest, baddest villains TV has ever seen. Kilgrave, a mind-controlling, manipulative jerk, made me physically ill sometimes. At the same time as being nauseating, Kilgrave is also quite tragic. He has the ability to make anyone do whatever he wants them to. Unlike what most shows would do, namely give him the aspirations to rule the world or something, Kilgrave’s desires are much more down to earth. He lives in the moment, in the here and now. Quite early on, it’s obvious that Kilgrave hasn’t been loved enough, and that this is one of the reasons why he does what he does. He wants someone to love him. But how can he know if someone really loves him, or if they do it because he tells them to?

In one of the most gripping scenes, Kilgrave talks about how hard life is for him. About how he has to weigh every word, or else he’s ordering people around all day. And after a while, you begin to feel sorry for Kilgrave, as the show examines his personality in as much detail as it examines Jessica’s. You feel sorry for Kilgrave, even when he’s murdering people at random. Although, never too sorry, because he always finds a way to shock the viewer into disliking him even more.

Even the supporting cast is amazing. Carrie-Ann Moss plays Jeri Hogarth, a lawyer you can’t help but love to hate. Despite how she manipulates everyone around her, I still wanted her to get her happy ending – of sorts. Jessica’s neighbor, Malcolm, portrayed by Eka Darville, garners sympathy as the story progresses. The only character that didn’t convince me (yet) would be Luke Cage, portrayed by Mike Colter. I’m not sure if it was the character’s lack of chemistry, or just because I didn’t find Luke’s personality particularly intriguing.

The plot is gritty and dark, and this is probably the darkest of Marvel’s TV series as of yet. Yet at the same time, it’s also the best Marvel has brought us so far, if you ask me, and I’m eagerly anticipating the second season. Jessica Jones is the best 2015 TV brought for me, and it’s a tribute to characterization, and how characters can pull you in, even if the plot doesn’t always move fast.