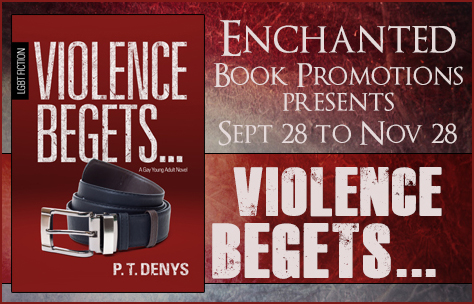 I’m interviewing PT Denys on my blog today, author of YA LGBT fiction “Violence Begets…” Thanks for answering my questions!

I started writing when I was in middle school and at that time I dreamed about publishing a book by 16 like SE Hinton did with The Outsiders. However, by the time high school rolled around, I gave up on that idea. In college I took a creative writing class and the teacher tore me apart. I didn’t write for nearly 5 years after that.   In my mid-twenties, I picked it up again when I was struggling to find a book that could hold my interest. I decided then that if I couldn’t find a book that I wanted to read, then I’d write one.

What inspired you to write Violence Begets…?

The story of Violence Begets… is not mine. The heart of the book is about physical child abuse.   It’s the story that so many children suffer through but are never able to talk about.

But it’s also about the bully. The character of Kevin began as a 2 dimensional ass hole but he wasn’t okay with that. He didn’t think the way I was portraying him was fair. He wanted people to understand the reasons why he did what he did. He didn’t try to excuse his actions but he certainly wanted a fair shake as far as judgment goes.

I’m all over the place. Can you tell from this post? I write like hell to get the feelings and emotions on paper. Then I pull everything together and then I read and edit, read and edit, read and edit…like several dozen times. After that I send it to my kindle and have the kindle read it to me a bunch of times so I can hear how things sound. From there I do beta readers. I sit down with each of them and interview them about specific things. Then I read, edit, and listen again a few times. Finally I send it my editor and we do a few rounds with beta readers as well.   I think Violence Begets… was in the edit phase for almost two years. I am a perfectionist. However, I learned a lot and I hope to make this go around a bit shorter.

MEAN! A reader once asked me this question and it’s like having to pick your favorite child but at the end of the day, it’s Kevin.

Not at he beginning of the year but I set one recently to write every day of November and so far I’ve met that goal.

I am currently writing the sequel to Violence Begets… Rick has to return home to rescue his little brother (born after he left) from his dad violence and of course has to face many demons along the way.

After a tragic accident devastates his family, 16-year-old Rick St. James starts his junior year of high school without any friends in a suburb of Salt Lake City, Utah. When he meets Kevin Vincent, he’s too distracted by the promise of new friends to see that Kevin has secrets of his own.

Having created an environment where he’s feared and admired by his classmates, Kevin finds pleasure in using his good looks and violence to control and manipulate those around him. Secretly, he cruises the gay club scene, turning tricks to earn money so he can party and get high.

As Rick’s dad becomes increasingly violent and abusive at home, the two form a surprising and volatile trust. In this battle of wills, their precarious friendship will either keep their lives from blowing up around them or possibly light the fuse that will cause the explosion. 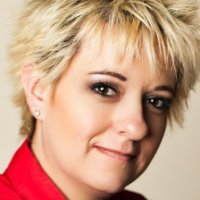 PT never imagined she’d actually publish a book. But, the story of Violence Begets… haunted her for over 20 years, and the lives of Kevin and Rick had to be shared.

In addition to writing a sequel, she divides her time between family, work, attending theater and reading.

Above all else she loves being a mother to 2 amazing daughters (a teenager and a baby).

PT believes that no one deserves to be intentionally hurt (physically or emotionally) by another. She also believes that behind nearly every bully is a story.