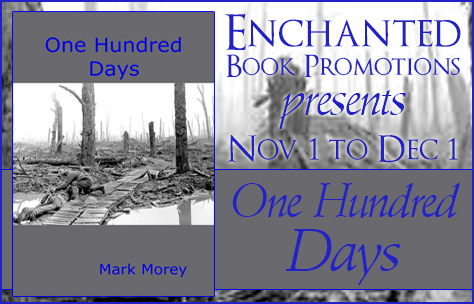 About 12 years ago I went to the local library intending borrow a good book, but I couldn’t find anything beyond stereotypes and cliches. Books written by many male authors had underdeveloped characters who often were unable to relate to women, which isn’t what men are really like. Or that wasn’t what I was like. I was inspired to write something better: mainstream fiction but with multi-dimensional characters who have interesting personal relationships. That’s where my writing I started from.

What inspired you to write One Hundred Days?

Australia’s day of war remembrance is April 25, which is the anniversary of the landing of the Australian Imperial Force at Gallipoli in Turkey in 1915. That campaign was a failure, but even if it had been a success it would not have changed the outcome of the Great War. After the Australian Imperial Force was evacuated from Gallipoli they were sent to the Western Front, where they achieved victories completely out of proportion to the small size of their force. And yet with a fascination bordering on obsession about the campaign at Gallipoli, the subsequent tragedies and triumphs in France and Belgium are unknown by most Australians. My grandfather was a casualty of the battle of Passchendaele in 1917, and in his memory I wanted to tell the story of the Australians on the Western Front.

I tend to write a clean draft, and when I get to the end of each chapter I read back what I have written and make corrections to grammar, spelling and the general flow of what I have just written. When I reach the end of my story I put it aside for a few weeks and then read it back, and make any necessary corrections. I always see weaknesses in the story or characters, and inevitably I add extra to achieve my desired outcome. Some describe the second draft as the first draft minus 10%, where for me the second draft is the first draft plus 10%.

Once I have what I think is a good story I ask one of my writing colleagues to read it and write a critique, I then use their good judgement to produce the final version.

I like Martin Ward. He has an interesting past including a four-year relationship with a Melanesian woman, and because of this he thinks himself an expert on women, which he’s not. He’s an expert on Melanesian women which is quite different. Beyond that he’s intelligent and always thinking of ways to do things better, and he’s fortunate to serve a general who also wants to do things better. Martin is typically Australian laconic, but beneath that he’s a sensitive man.

In late 2014 through to early 2015 I completed a story about the motor racing driver from the 1930s, Achille Varzi, and Varzi’s tragic relationship with the wife of a team mate and his morphine addiction. And then the centenary of Gallipoli came around and the resulting news coverage, films, stories and everything else reminded me of my grandfather’s service and injury on the Western Front. So I put Achille Varzi aside and researched what happened in the last two years of the Great War. I also obtained my grandfather’s service records so he could be interwoven into this story. It’s a relatively short story and was amazingly easy to write. In the end I achieved something good, but it wasn’t my original goal for 2015.

I have my story on Achille Varzi and then Italy in the Second World War told from the Italian side, before reverting to Varzi’s post-war racing and his death. After Varzi died in 1948, European motor sport became more British-focussed with many British cars and drivers dominating racing in the 1950s. The first British Formula One World Champion, Mike Hawthorn, experienced tragedies almost beyond comprehension. At the same time he was a deeply flawed man with some strengths and many weaknesses, and only when he overcame some of those weaknesses did he achieve what he was capable of. I would like to write something focussed on Mike Hawthorn because that would be challenging, but if done well it could make for an interesting story. Mike Hawthorn would be a kind of sequel to Achille Varzi from the 1930s and 1940s. 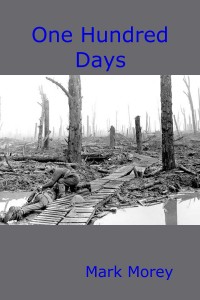 In 1917, the mud of Flanders soaked up the blood of a quarter of a million men. If the war continued like that, the Allies would lose. One battle turned that around and was the beginning of a hundred days of advances to victory. This is a story about how that was done.

Two Australian soldiers experience the last two years of the Great War. Martin Ward is a lieutenant working alongside Major-General John Monash, and he sees the transition from slaughter at Passchendaele to breaching the Hindenburg Line. Alec Morey is a gunner severely injured in Flanders, and he returns to Australia to watch on in amazement as the Australian Imperial Force plays the major role in victory.

This is a fictional account of a story not well known; using real events, fictional characters and real-life characters to tell the tale of how the Great War was won.

I am part-time in the workforce and a part-time author, and writing technical documentation and advertising material formed a large part of my career for many decades.  Writing a novel didn’t cross my mind until relatively recently, where the combination of too many years writing dry, technical documents and a visit to the local library where I couldn’t find a book that interested me led me consider a new pastime. Write a book. That book may never be published, but I felt my follow-up cross-cultural crime with romance hybrid set in Russia had more potential. So much so that I wrote a sequel that took those characters on a journey to a very dark place.

Once those books were published by Club Lighthouse and garnered good reviews I wrote in a very different place and time. My two novels set in Victorian Britain were published by Wings ePress in July and August of 2014. These have been followed by my story set against the background of Australia’s involvement on the Western Front. Australia’s contribution to the battles on the Western Front and to ultimate victory was well out of proportion to the size of the nation and the size of their force. Once you read this story you will appreciate the great things that our nation achieved.