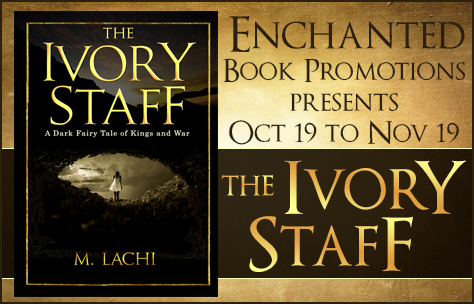 Writing has always been in my bones since childhood. I started out writing songs, poems and long-winded comic strips. I would grab a stack of blank printer paper, staple the paper together and beginning filling the pages with impromptu hand written stories. As I got older and became an avid reader, I itched to write a tale of my own. I wrote a novella in highschool and embarked upon my second work, The Ivory Staff, during my undergrad years.

What inspired you to write The Ivory Staff?

I was inspired by all of the novels and memoires I’d read before and during my writing of the manuscript. Before I’d begun writing, I’d read a lot of classical literature during highschool, taking in all the authors required in my lit classes and reading as much of their full repertoire as I could—Steinbeck, Dickens, Orwell, Twain, Bronte. While writing, I found myself inhaling a lot of contemporary and literary sci-fi, fantasy and horror collections including Herbert, Heinlein, Koontz, King, Jim Butcher, Rowling. I remember reading The Shining freshman year at UNC. I stood outside the library at 9:30 a.m. and opted to begin a chapter before my 10 a.m. class. About a few minutes later it was 5 p.m. and I’d finished the book, still sitting in front of the library. I was also inspired by my several mind-opening trips to Africa during college as well as my 6-month stint in Europe.

I read over a section several times, sometimes aloud, to see if it portrays the feel I’m looking to demonstrate. I concern myself more so with content editing than punctuational editing and save that for a different set of eyes.

I can’t particularly say I have a favorite. I created them all, their goods and their bads, and admire them all for their strengths or their attempts to foster strength in strength’s absence.

My writing goal for 2014 was to finally land a publisher or agent, which came about around October 2014. I then set the goal to have my book published and released before the end of 2015, and that came about in October 2015! My end-of-year goal is to finish the outline of my next work and embark upon the journey of completion.

I am working on my next novel, a New Adult Speculative Sci-Fi/Fantasy–a series actually—as well as a potential memoire on one of my greatest heroines.

How was young Samiyah to know that her simple grace, wit, and beauty—exceptional traits given her peasant class—would land her in the middle of a chessboard of high-level political turmoil or that the love that blinds politics, the hate that blinds brotherhood, and the lust that blinds love would flip that chessboard on its side? Rife with passionate dialog, edgy suspense, and epic conflict, this Dark Fairy Tale follows our heroine as she journeys to heal a nation broken by the internal prejudices of class warfare, armed with nothing but stark determination.

M. Lachi is a published author and an award nominated songwriter and composer. Her resume includes features on Oprah Radio, CBS Radio, The CW, Oxygen, and the E! and Style Networks among others. M. Lachi lives in New York City and enjoys reading, composing and catching live performances.