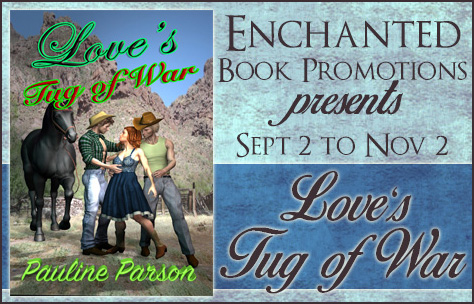 I can’t ever remember not wanting to write, but I specifically remember in the Fifth Grade, writing my first “novel”. I had a sick friend who was bed-ridden after an operation, and I would go over and read sections of my ongoing story of a young girl in a pioneer family heading west. Talk about having a captive audience, but she enjoyed it.

What inspired you to write Love’s Tug of War?

I really wanted to try writing a Romance novel. My prior books (under a different pen name) have all been in the SciFi/Fantasy genre, with strong female characters. Although those books all had secondary romantic sub-plots, I never got to focus primarily on the romantic aspects of strong independent women characters.

I’ve had a character in my mind that would need to develop her independence and make it on her own due to her becoming a widow, and this story developed from that seed.

After finishing a book, I start by going back through it line-by-line looking for errors. I learned the hard way that this is not nearly enough. I now also depend on several editors who read the book critically, looking for typos, inconsistencies, misspellings, etc. It’s amazing how many things you can miss on your own!

My favorite character is Ellie, the housekeeper at Jeb Cotner’s ranch. She is just a lot of fun and really is the stabilizing force in their lives.

My primary goal for 2015 was to get this first Romance completed. Check that one off on the list of to-do’s!

I have two novels that I want to finish by the end of this year or early in 2016.

The first one is book #2 in this “A Love’s Romance” series, called “Love’s Passion Perfect”.

I am also trying to complete the 4th book in my SciFi series “Space Detective – A Skip Brown Adventure” called “Murder on Casey”. (note: this is under my SciFi/Fantasy pen name Pj Belanger) 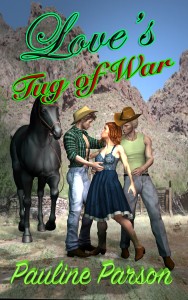 Buy the book on Amazon.

At 41 Paula finds herself on her own in beautiful Arizona. She’s a talented comic artist – with a broken heart – a widower that has a chance to discover if she can make it as an cartoonist or fall flat on her face. Jeb Cotner accepts Paula as his new finish artist for his famous Honky Tonk Man comic strip. She has a chance of a lifetime to learn from the famous syndicated satirist. This job holds the opportunity that could lead to her own comic strip career. Yet, rumors fly that the 75-year-old artist is a cantankerous old man who has an eye for the “young girls”.

With grave doubts, she leaves her quiet life in New England and heads into “cowboy” country with her own comic character, Abby Press, at her side. Her world is turned upside down by two handsome brothers, neighbors of Jeb Cotner, who vie for her attention. Her sexual desires awaken, something so new to the young woman that it sends her to heights that she had long forgotten existed. She plays a dangerous game of “Tug of War” as her heart is torn between the two men.

Pauline lived in New England most of her life. She grew up in the hills of northwest Connecticut, did her college on Maine’s beautiful coast and spent her early-married years in Massachusetts. She later returned to her Connecticut roots. She settled in with her husband, two boys and a big Great Dane on a small “gentleman’s farm” in the mountains (yes there are mountains in Connecticut) for 33 years.

During those years, they raised goats, geese, turkeys, chickens and a mischievous horse named Midnight Madness. After the boys grew up and had lives of their own, Pauline and her husband moved to Central Florida. Ever since the kids were little they had loved Disney- they are now only 20 minutes from the parks and visit often. She lives a quiet life writing fiction and motorcycling with her husband whenever she can find the time. Her two cats and fun loving miniature beagle keep life interesting.

This is Pauline’s first foray into a Romance type genre. (Her SciFi, Fantasy, Racing and Motorcycling books are published under a different pen name) “I always wanted to write books about women coming into their own while fighting adversity and finding meaningful relationships. My women characters are always strong and independent and in “Tug of War” I continue with Paula finding the courage and independence to find her own way.”