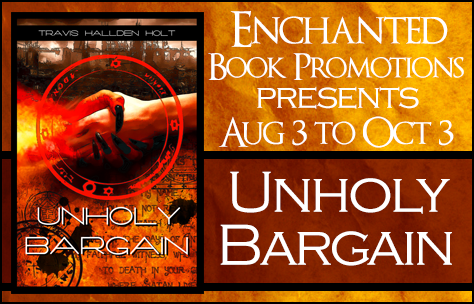 Today I’m interviewing Travis Holt, the author of supernatural thriller “Unholy Bargain”. Welcome to my blog, and thanks for answering my questions.

I’ve always loved books and stories. I grew up before personal computers, the internet, cable TV, etc., and during those long, cold winter nights (or when I was grounded) I would read and let authors take me to other places and times. It wasn’t long until I pondered the idea of creating my own story and really liked it. There was a lot of satisfaction in being in control, having events and characters and dialog and all that goes into a story move in the direction of my choosing. It became my artistic expression in a sense. I wrote a couple really crappy short stories as a kid, then life happened and I didn’t return to writing until much later in life. As an adult, when the drama in life simmered, I took to really learning the craft.

Where did you get the inspiration for Unholy Bargain?

In 1998 I interviewed an inmate convicted of one of the most brutal and senseless murders in Florida history. Within the sterile, cinder-block walls of a maximum security prison, a baby-faced, 15-year-old boy recounted that gruesome afternoon.

By all appearances, he looked the most unlikely of killers. He sat in my office with prison blues hanging loosely over his petite, lanky frame. He looked like a boy who should be bagging groceries or stumbling through school hallways hunched over by an overstuffed book bag. But that is not what made this case unique. Forty-eight times he had plunged a knife into the chest of an elderly widow, and even more unsettling was his unwavering insistence that those actions were not by his own will. In other words, he claimed he was possessed.

I had worked that job several years and learned to sift through lies to uncover truth. This young man was telling the truth, or at least what he believed to be true. Furthermore, he had already been convicted, and because he had pled guilty, he had waived his right to appeal. It served no purpose to lie at this point, especially such an outlandish one. He was going to spend the rest of his life in prison, and had no legal recourse to attempt otherwise.

I went on to do my own research in the subject matter and was intrigued with the possibility that spirits could influence humans to commit crimes, maybe to serve some bigger purpose outside a personal agenda. The research gave birth to ideas and eventually those ideas were shaped into a story.

A lot of Unholy Bargain was written with pen and notebook on a park bench. After a day of writing, sometime in the evening, I would key it in and while typing I would perform my first edit. Yes, that sounds archaic and inefficient, but that’s me. Eventually I’d run the material through a critique group of six members where they would bludgeon my baby and really piss me off. Usually by the following day I would see the merit in their critiques and become grateful I’m surrounded by such kind, gentle, and brilliant writers. Then another round of edit and critique. Eventually the material would make it to my critique group of just two, and the previous steps would repeat. After those rounds, it goes to a beta-reader and the pounding starts over. Its really a pathetic way to live.

It’s got to be Nate. He’s reckless, bold, speak’s his mind, and doesn’t worry to much about consequences. He approaches life the way I’d like to if I didn’t have responsibilities. Mortgage payment, kids in college, stuff like that.

Are you working on something now? If so, can you tell us about it?

I’m working on a sequel to Unholy Bargain which takes place a few years down the road. All the main characters will return of course, plus a few new ones will enter the scene. Without giving too much away, there will be more dealings with the spirit realm: remote viewing that spans time, an ancient artifact, past lives, and “walk-ins.”

An assassin is at work—one of the best in the trade. His body turned to dust long ago, but his spirit roams the Earth freely, undetectable to the five senses. He stalks his victims waiting for just the right opportunity. Then, in quick succession, he possesses a human host and strikes down his quarry. For a century and a half he has served this way.

Deputy Sheriff Nate Barrington is riding the crest of a new relationship. Kaitlyn Spencer is beautiful, altruistic, enlightened—everything he’s not. She teaches classes in New Age philosophy at her growing school. Nate doesn’t share her spirituality, but the physical passion hasn’t subsided enough for him to care.

Nate’s nirvana quickly unravels when Kaitlyn’s life is threatened on two separate occasions. With no apparent motive or any evidence suggesting collusion, the police are stumped. Even more troubling to Nate, Kaitlyn is eventually convinced she is the target of unseen forces.

A hardheaded pragmatist, Nate isn’t prone to believe that spirits can possess people. As far as he’s concerned, Kaitlyn’s claims of perpetrators possessed by a spirit assassin are on par with comic book stories and have nothing to do with reality, and her esoteric, New Age mumbo jumbo begins to drive a wedge into their relationship. And why Kaitlyn? What secret is she hiding?

Even with the sheriff’s resources at Nate’s disposal, the odds for Kaitlyn’s survival are not in her favor. The true enemy is virtually invisible, and Nate’s conventional police tactics have no effect on the spirit world. Strikes come from anytime, anywhere, and from random, unwittingly manipulated people. Behind it all is a deal the assassin had made with the devil: send Kaitlyn Spencer to an early grave in exchange for a fresh start. For that, the assassin will stop at nothing to uphold his end of an Unholy Bargain.

Travis Hallden Holt is a former U.S. Navy surface warfare officer and veteran of the Persian Gulf War. He’s worked the past twenty-two years in the corrections side of law enforcement, first in the prison system, then in the streets as a probation officer. He spent three years supervising felons in a south Atlanta neighborhood ranked the ninth most dangerous neighborhood in America, where one in every twelve residents becomes a victim of crime each year.

For years, his interests were in weaponry (both small arms and large scale), warfare tactics, hand-to-hand combat, criminal justice and unsolved crimes. But life has a way of molding perspectives, and Travis came to realize the physical world known to the five senses didn’t have all the answers. It scratched the surface at best. Accordingly, Travis’s interests shifted to supernatural phenomenon, spirituality, the mysteries of life, the invisible world beyond our five senses and the forces that lie therein. He’s still a peace officer, but one who has mingled with psychics, mystics, mediums, energy healers, shamans, gurus, artists and denizens of the “underground.”

Travis is the author of Unholy Bargain, a supernatural thriller published by Blood Moon Publishing. He resides in Atlanta, GA.