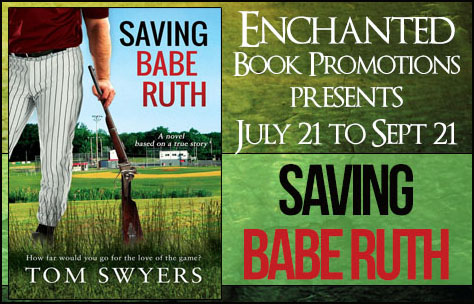 Please welcome Tom Swyers, the author of literary fiction / thriller “Saving Babe Ruth”. Thanks for visiting, Tom, and for answering my questions.

I’ve always liked to write, but the idea of being an author took hold when I became passionate about a story I wanted to tell. Writing a novel can take a long time and passion about it will see you through to the end.

Where did you get the inspiration for Saving Babe Ruth?

It’s based on my true story. It’s about events I experienced over the past several years.

Usually, I rewrite what I have written the previous day the next morning before writing new material. I think sleep can aid in the editing process. Nothing helps editing more than returning to the screen with a pair of fresh eyes.

I’ve learned to love them all, even the bad guys. But if I had to pick one character as a favorite, it would be David Thompson. When everyone seems to be against him, he figures out a way to survive and to move his ideas forward.

What are your remaining writing goals for 2015?

I’m taking a break and planning my next book.

David Thompson might live again in another novel. Stay tuned! 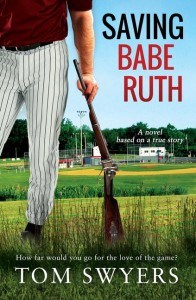 Based on a true story, Saving Babe Ruth is an award-winning novel about a family headed by David Thompson, a burned-out lawyer and Civil War buff. When he learns that the town’s youth baseball league is going to fold, David’s love for the sport and for his son, Christy, inspire him to try to save it for the boys in town. David puts his fading career on hold as he struggles to resurrect this dream while at the same time trying to salvage his marriage to his wife, Annie.

Though Christy and Annie want to see him save the league, David finds himself in way over his head; the more he passionately tries to save it, the more he ends up hurting Christy and Annie. It’s a catch-22 that leaves his family wounded and David lost, wedged between his desire to revive the league so he can live with himself, and the desire to heal his family so they can live with him.

When David starts to keep secrets from Annie to satisfy these desires, he weaves a web of deceit that further fractures the family. At the same time, the town wrestles to keep its own secrets under wraps while it almost bursts with people leading double lives. They want David and the league to fail, and they’ll stop at nothing to get what they want, even if they have to go through Christy and Annie to get it.

With the help of Johnny McFadden–a newfound friend who’s addicted to baseball–David concocts a plan to defend the league and his family. The pair will have to navigate through a maze of backroom politics, corruption, scandal and crime that extends to the professional sports world. David will have to call upon all of his legal and survival skills to try and turn things around.

Saving Babe Ruth is also the inspiring story about a baseball team full of teenage outcasts struggling to believe in themselves. When the time is right, they’ll face the prospect of having to fight crazy with crazy to save baseball for themselves, their town and beyond.

The novel reveals the underbelly of youth sports that’s hurting communities nationwide today, but readers and reviewers say you don’t have to be a fan of baseball or sports to enjoy the story. Its themes, including one of community responsibility, are beginning to resonate. The story is so powerful that one of the nation’s leading professional sports agents has threatened a lawsuit over the book. The novel has even caused one town to come to a standstill to hold an emergency board meeting over it. Watch this trailer video to learn more about how Saving Babe Ruth came to life.

Saving Babe Ruth is the winner of a number of accolades including the 2015 Benjamin Franklin Book Award for “Best First Book: Fiction.”

If you like fast-paced and humor-laced stories, don’t miss this family’s fight to stay together as it confronts a youth sports underworld loaded with captivating characters. 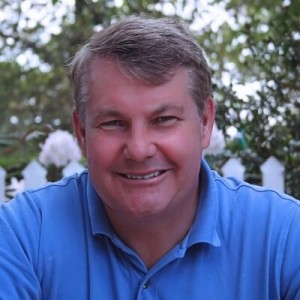 Award-winning author Tom Swyers first had an audience on the edge of their seat (and the girls giggling) when his play, The Great Train Robbery, made its debut in the seventh grade.

After high school, he worked his way through some of the best colleges in the country. Employed in a variety of jobs ranging from a late-night convenience store clerk to a fine jewelry salesperson, Tom eventually graduated from college and then worked his way through law school in the caverns of Wall Street.

Since then, he’s studied at the New York State Summer Writer’s Institute at Skidmore College. He’s also a member of both the Authors Guild and the Hudson Valley Writers Guild.

Along the way, he married his high school sweetheart and raised a family. With that came baseball, but that’s another story (Saving Babe Ruth). Tom is also an award-winning youth sports advocate.

When he isn’t writing or reading, Tom is usually running (literally) away from trouble on the back roads of Upstate, New York where he lives with his family and two cats (really two dogs working undercover).

Saving Babe Ruth is his first novel and these are some of the awards it has received: