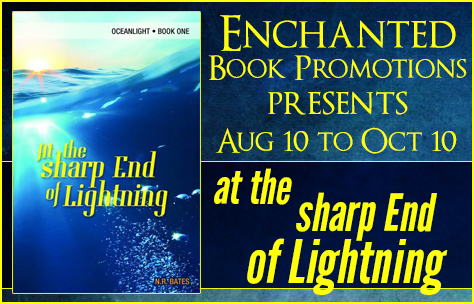 I remember wanting to be a writer when I was twelve or thirteen. In my later teens and during college, I wrote short-stories, poems, and song-lyrics, but writing professionally as a scientist took over. In late 2012, life circumstances and the incredible support and encouragement of my wife and life partner lifted off the lid and I could no longer suppress the drive to write fiction. I’m not sure if I can call myself an author or writer yet as I strive to improve my craft.

Where did you get the inspiration for At The Sharp End of Lightning?

There were several themes I wanted to write about for the Oceanlight series. The first was a way to highlight in a different way about ocean ecology, and environmental and climate change. I decided to write under the broad genre of epic fantasy and science fiction, weaving in serious issues about the state of the planet. In these genres though there are never many characters who are disabled. Few characters are really faced with physical constraints that limit their actions. A major character in the book, Einion Morgan Alban, is faced with the realities and adjustments of being born with haemophilia (note: the British spelling; hemophilia in the U.S.). In the period I wrote for him, treatments for the condition were rather rudimentary and internal bleeds were life-threatening—I know this from very real personal experience. The difficulties still remain today despite the ups and down of medical advancement.

After I‘ve finished a first draft, I revise and revise many, many times.

In the early stages of editing, I use several different techniques that come in waves—editing the digital version of the draft or converting the text to audio files to listen to while I correct. For the digital versions, sometimes I change the font or style. All these approaches are so that I get a different view of the draft I’m working in hopes that I see the draft afresh. I also print out a copy when I’m happy with a more final version and edit that. Again, its partly in an effort to see the writing afresh but it’s probably partly a still held fear that all my electronic copies will disappear from my computer and the multiple backups in some catastrophic crash. I still remember the computer upon which I wrote my Masters thesis irrevocably crashing, but I had backups!

In the later stages of the editing process, I give copies of the book to professional editors and my wife whose opinion I trust. There is another round of multiple edits, a too-and-fro, towards a near final version.

In the final stages, I also edit several times with the formatted e-book/print file, and then I wait to receive a few printed hardcopies. Even then, with a physical book in hand, there are things to spot and a few corrections to make. Then I publish the book. As an independent author, I do try to produce a book that is as polished as it can be—as professional as it can be! It is such a long process.

Yalara Narika, the Sea Sprite in my stories, is my favorite character. She has a fierceness and strength that unfolds in the Oceanlight series. I have the benefit of seeing how her character develops in book two, The Gathering Places, which I completed six months ago at the same time as the first book.

If I’m allowed another choice, it would be Fimafeng, the shapeshifting villain and murderer. Shapeshifting is a common theme to Celtic mythology as with many other cultures and folklore. I enjoyed writing his part in the story. He is not a simple villain, and perhaps he might have some redeemable features. He disappears in the middle of the first book, but he remains an ever-present threat. And don’t worry, his role in the story continues!

Early in the year, I set a goal of finishing several short-stories. I was able to complete them and published them as The Fall of Icarus (The Elevator, The Fall of Icarus, and The Girl) in the spring. But since then I’ve been so busy with my career as a scientist, I have not been able to write much. It is so difficult to carve out time to write and at the same time maintain a good balance of life and work.

I really enjoyed my foray into short-stories and writing in the first person. I am presently working on minor edits of the second book in the Oceanlight series, The Gathering Places, and I hope to publish before the end of the year. Although I haven’t been writing, I have been mulling over a couple of novella-length stories. I do feel myself drawn away from the genre of epic fantasy and science fiction towards magical realism and literary fiction, and so I expect that these two novellas will be based upon serious issues—with some fantastical and surreal elements to them. 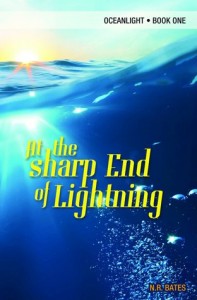 Title: At The Sharp End of Lightning

AT THE SHARP END OF LIGHTNING. The interwoven fantastical tale of family, of loss and sacrifice, of unexpected gifts and coping with disability and new abilities set against the backdrop of climate change occurring across parallel worlds. In Oceanlight, Yalara Narika, a winged Sea Sprite, searches for her lover over immense seas only to find catastrophe and realization that her world is in turmoil. Meanwhile in the safe suburban normality of North Wales, Einion Morgan Alban, a restless youth afflicted by a disease of the blood, is nearly murdered by a man in a white suit. Yalara and Einion must discover the causes of their near-deaths and their as yet unrevealed connections as they both face upheaval to their lives and their worlds. Book One of the OCEANLIGHT series. 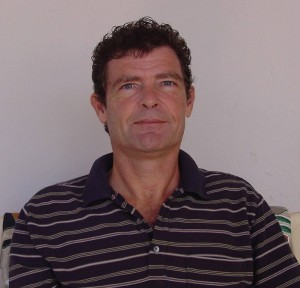 NR Bates was born in London, grew up in Wales, and lived in Canada and Bermuda. He shares his life with his wife and his house with seven cats, one dog and the subtropical wildlife of lizards, wolf spiders and ant colonies that seek out a better life indoors. He is an oceanographer and scientist, and has published more than one hundred and thirty scientific papers on ocean chemistry, climate change and ocean acidification. He is a Senior Scientist at the Bermuda Institute of Ocean Sciences and Professor of Ocean Biogeochemistry at the University of Southampton, UK. His novels focus on epic fantasy and magic realism, and inspired by his deep love of the ocean and environmental sciences. He has also recently published a small book of short-stories set in Paris, entitled “The Fall of Icarus (The Elevator, The Fall of Icarus, and The Girl)”.