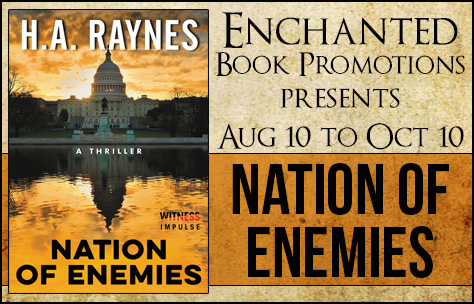 I’m interviewing H.A. Raynes, author of thriller “Nation of Enemies”. Welcome to my blog, and thanks for answering my questions!

It was a process, actually! In fifth grade I had this amazing creative writing teacher who I remember vividly. Long hair, wire rim glasses, lanky. He had us call him Victor. Through him, my interest in writing was sparked. But it wasn’t until years later, after writing only journal entries, that I began to think of stories. When I was 28 I wrote a screenplay, which was a finalist in the Massachusetts Screenwriting Competition. That boosted my confidence and I started thinking of writing novels. I took a class at GrubStreet (a great writing organization here in Boston), and one thing lead to another. Before long I was writing a novel (my first, still on my hard drive!). It’s hard to say exactly when I knew. Perhaps it was fifth grade. Or maybe it was later, when I couldn’t stay away from my computer.

What inspired you to write “Nation of Enemies”?

My inspiration was a five foot tall, white haired eighty year-old named Beatrice. About ten years ago we were talking and she was recounting the story of her family fleeing Poland during WWII. Everything and everyone she knew was suddenly gone. The houses and streets were empty. Regardless of their hopes and fears they had to escape. In what must’ve been a whirlwind, they emigrated to the United States. Now, I’ve heard stories about WWII, seen the movies, as we all have. But something about her story resonated with me. She looked directly into my eyes that day and asked, “Imagine that? Everything you know, just gone one day?” And I did. I brought the war home to the United States. Imagined people emigrating en masse from this powerful, “safe” country of ours. And Nation of Enemies was born.

I try (desperately!) not to go back and revise until I have a first draft. Sometimes I will, but only if it’s something major that has a ripple effect in the book. I’m in an amazingly supportive and highly critical writers group. I submit about 25 pages to them every month, and when I’m finished they read the entire manuscript. Once I receive all the feedback (along with my own notes I keep throughout writing, things to go back and check/fix),  I begin revising a second draft, working out the kinks in the structure and refining plot as well as characters. My writers group gives it a last once-over to catch any major issues. Then after a final revision and read-through, it’s ready to be sent out!

This is a tough question. I actually started out writing the book from the perspective of Hannah, who now is more of a background character. But I knew her voice right away and I feel deeply for her. I also love Jonathan. And Cole. And Sebastian. And Steven. I don’t think I can commit to one!

Yes! Honestly, I feel like a kid saying this, but publishing my book is a dream come true. In January I signed with HarperCollins / Witness Impulse and eight months later my book is coming out. It’s an amazing feeling. I’ve also kept writing. Though the publishing end does take many hours of research/marketing/etc., I’ve been careful to set aside time to work on my next book. I’d love to finish a draft by December so time will tell…

I can’t say too much about it at this point but I can give you some details. It’s told in multiple points of view. Takes place in New York City. And it revolves around the lives in an apartment building. It’s different from Nation of Enemies but still has an air of mystery with a thriller component. 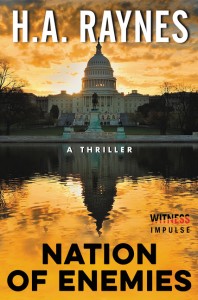 It’s all about the genetics. DNA. Black & white.

A decade ago the U.S. government mandated that all citizens be issued biochips containing all of their medical information and an ID number indicating a person’s health. Then they made the information public—the implications of which are wide-spread and devastating.

Now on the eve of the 2032 presidential election, the country is deeply divided and on the brink of civil war. But as the two major political parties face off, innocent Americans are dying at the hands of masked terrorists. When the Liberty Party’s presidential nominee is assassinated in a highly-coordinated, masterful attack, it sets off a chain of events that will change the course of history and leave America’s inalienable rights—life, liberty and the pursuit of happiness—dangling on the precipice of extinction.

H.A. Raynes was inspired to write NATION OF ENEMIES by a family member who was a Titanic survivor and another who escaped Poland in World War II. Combining lessons from the past with a healthy fear of the modern landscape, this novel was born. A longtime member of Boston’s writing community, H.A. Raynes has a history of trying anything once (acting, diving out of a plane, white water rafting, and parenting). Writing and raising children seem to have stuck.