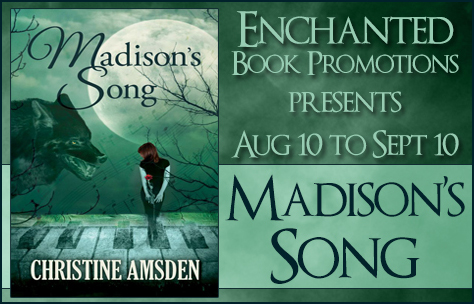 When did you know you wanted to be an author?
I’ve always wanted to be an author! I wrote my first short story (about Cabbage Patch Dolls going to Mars) when I was 8 or 9. Writing has always been in me. Now, being a pragmatic girl, I did go through about fifty other “day job” ideas along the way – everything from teaching to flying a space shuttle to becoming a nun (who would somehow also have six children – I was young and confused).
What inspired you to write Madison’s Song?
Cassie Scot inspired me to write about her friend, Madison. Cassie, the only ungifted daughter of powerful sorcerers, got a four-book urban fantasy series after she barged into my brain back in 2009. Madison, shy and at first underappreciated started out as I was writing an early chapter … “Okay, Cassie needs some friends. Let’s see … my mom kept hinting that I should name my daughter Madison. I pretended not to notice, but it’s a nice name for a character. Madison it is!”
Actually, it didn’t take long for both Madison and Kaitlin to become more than “friends of Cassie’s.” By book two, each had a significant subplot and lots of back story that never made it into the original series. At first, I thought Cassie would solve their problems alongside her own but by book four she and I both learned an important lesson – you can’t solve someone else’s problems for them, you can only be there to lend comfort and support.
Madison has lots of problems. During the Cassie Scot series she almost had her soul stolen, was kidnapped twice, and betrayed by her own father (who told her he had adopted her in the worst way possible). In Madison’s Song, she gets to deal with all that and become the heroine of her own story!
Believe it or not, the book does stand alone. I made sure to put all the relevant back story in for readers who enjoy single-volume paranormal romance.
What is your editing process like?
Thorough! I begin with a rough draft, then immediately revise for the plot problems I already know are there. Then I start getting beta readers involved – I don’t read my novel more than once before getting another pair of eyes on it. The words start to blur together if I read it twice back to back!
I’ll usually go through 3-5 revisions for story (plot, character, flow) then another 2-3 edits for sentence-level issues (grammar, spelling, punctuation, incomprehensibility…). My publisher hires a content and a copy editor for me, and for a while now I have been hiring my own content and copy editors as well. I hate finding errors after a book is out, and do my best to make sure it’s clean!
Who is your favorite character from your book?
Madison. She and I have a lot in common, which made her both easy to write and difficult at the same time. She forced me to look inside myself for flaws and for strengths, and she shared one important trait with me: Loyalty. She would do anything for the people she loves, even if she’s afraid.
Did you set any writing goals for 2015? Did you meet any so far? Are you working on something now? If so, can you tell us a little about it?
My goal was to finish Kaitlin’s Tale, another stand-alone companion to the Cassie Scot Series. I did! Not only is it finished, but it has been accepted for publication.
After that, I wanted to try to come up with a new idea and maybe finish a rough draft by the end of the year but … to be honest, at the moment I’m taking a writing hiatus. After starting and discarding four ideas, I realized that putting out 6 books in 3 years is taking a toll and that I need some time – probably a few months – to rediscover my muse. So far I’ve looked under all the beds and in the closets, but I’m a little afraid to look in the couch cushions. I really hpoe I didn’t drop her behind the stove that one time I had to move it. Yuck! But that would explain a thing or two. Hmmm…
Thanks for having me here today! 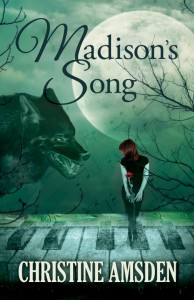 Her voice is enchanting; his soul is black…

Madison Carter has been terrified of Scott Lee since the night he saved her from an evil sorcerer – then melted into a man-eating monster before her eyes. The werewolf is a slave to the moon, but Madison’s nightmares are not.

Despite her fears, when Madison’s brother, Clinton, is bitten by a werewolf, she knows there is only one man who can help. A man who frightens her all the more because even in her nightmares, he also thrills her.

Together for the first time since that terrible night, Scott and Madison drive to Clinton’s home only to discover that he’s vanished. Frantic now, Madison must overcome her fears and uncover hidden strengths if she hopes to save him. And she’s not the only one fighting inner demons. Scott’s are literal, and they have him convinced that he will never deserve the woman he loves. 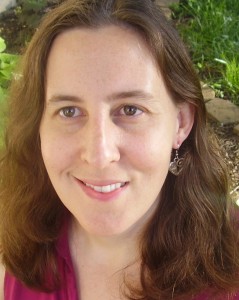 Christine Amsden has been writing fantasy and science fiction for as long as she can remember. She loves to write and it is her dream that others will be inspired by this love and by her stories. Speculative fiction is fun, magical, and imaginative but great speculative fiction is about real people defining themselves through extraordinary situations. Christine writes primarily about people and relationships, and it is in this way that she strives to make science fiction and fantasy meaningful for
everyone.

At the age of 16, Christine was diagnosed with Stargardt’s Disease, a condition that effects the retina and causes a loss of central vision. She is now legally blind, but has not let this slow her down or get in the way of her dreams. In addition to writing, Christine teaches workshops on writing at Savvy Authors. She also does some freelance editing work. Christine currently lives in the Kansas City area with her husband, Austin, who has been her biggest fan and the key to her success. They have two beautiful children.