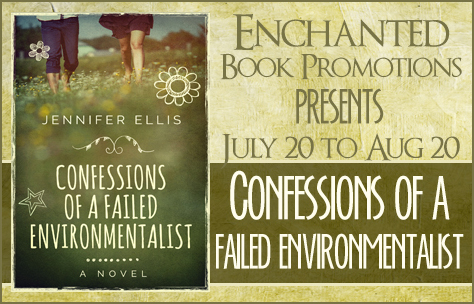 I knew I wanted to be an author when I was pretty young. I read The Lion, the Witch and the Wardrobe when I was around eleven, and I realized what absolutely perfect and magical worlds writers could create. I had this idea that if I were a writer I could just stay in those worlds forever. Then I got hooked on the Tintin series, the Anne of Green Gables series, and the Oz series, and I was absolutely determined to be able to create those kinds of characters and worlds myself. At the outset, it was more about recreating the feelings that I got when reading my favorite books through my own writing. I was so sad when some book series ended that I wrote additional books in the series in my head so I could keep hanging out with the characters.

Where did you get the inspiration for Confessions of a Failed Environmentalist?

I’ve worked in the environmental field for a long time, and yet I feel very self-conscious about whether I’m living a sufficiently environmental life. I feel guilty when I drive somewhere, eat bacon, buy a new tank top, or wear mascara. Even though I worry a lot about the environment, I’ve never really fit very well with the environmental crowd and feel like a sore thumb at environmental events. But sometimes I think feeling guilty or thinking we’re not environmentalists makes us less likely to try to live sustainably because we think it’s impossible and give up. I wanted to make the idea of environmentalism more accessible and funny and explore some of the things that we do (or at least I do) just to create a good environmental impression. I also wanted to write about the idea of second chances and finding love again after a failed marriage, especially for a more unconventional heroine like Alana. All my books have at least some romance. I’m not very good at sticking to all the romance rules and tropes, but I do have very hot, if a bit complex, heroes. With Confessions, I wanted to write an environmental romantic comedy—you know, an unheard of genre, but hey, I can forge new ground, right?

I edit a bit as I go, reading over sections from earlier in the day, or the previous day and fixing them up a bit. I will also go back and weave through new plot threads or changes to things such as character names or events as I write. As a result, when I sit down to edit, the manuscript is in reasonable shape. I’ll usually do four full editing passes. During the first pass, I’ll spend at least three to four days per chapter looking at all the details, making sure the language is fresh, editing out overwriting, deepening the characters, adding new sections as needed, and making sure the plot works. In the second pass, I try to get through a couple of chapters a day making sure the story hangs together, looking for rough spots and checking for consistency. Then it goes to my copyeditor. Once I get those changes back, I do another pass, which usually takes three to four days, depending on the extent of the edits, and then do a final full read through to proofread. This varies a bit from book to book as some require more drafts or editing than others.

That is a really hard one. I love Blaine’s ability to just say whatever he thinks and I think he can be pretty funny, even if some people think he’s a really rotten ex, and I really like Maude as an environmental truth-teller. But I would have to say that Alana is my favorite. She’s a bit flaky and neurotic, but she’s fun, irreverent, and has a good heart.

I plan to finish the third and fourth books in my middle-grade fantasy series (which is for adults too). I also have three short stories to write for anthologies including Tails of the Apocalypse, an anthology about animals in the apocalypse, and Alt. History 102, an alternative history anthology. I’m also considering dabbling with a pen name and writing something completely different in the romance department, but we will see if I have time.

I’m almost finished the third book in my Derivatives of Displacement science fantasy series about the intersection between science and magic. The series involves time travel, parallel universes, quantum physics and witchcraft and is told from the point of view of Abbey, a physics and chemistry geek, and Mark, her neighbour with Asperger’s. I have about ten thousand words to go in the first draft. I hope to have it finished by the end of the summer. 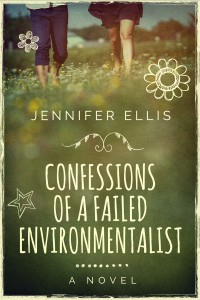 Title: Confessions of a Failed Environmentalist

Alana Matheson always tries to do the right thing for the environment, even when it means boycotting school meatball day, forgoing the use of makeup, or getting entangled in a bet with her non-chicken-loving ex-husband over which of them can be the most environmentally conscious.

So when a mining company proposes developing a mine right in the middle of the community watershed, well, of course Alana is going to be on the front lines opposing the development.

Alana struggles to do right by the community, deal with her feelings for Nate, and maintain her own environmental morals. But as the conflict over the mine heats up, it gets increasingly difficult to be on the “wrong side,” and both Nate and Alana are cracking under the pressure.

Part satire, part serious, Confessions of a Failed Environmentalist is about the cast of characters who seem to pop up in all environmental disputes, and how all of us fail sometimes to do the right thing for the environment, in both big and small ways.

Jennifer lives in the mountains of British Columbia where she can be found writing, hiking, skiing, borrowing dogs, and evading bears. She also works occasionally as an environmental researcher.

Jennifer writes science fiction, romance and dystopian fiction for children and adults, including Apocalypse Weird: Reversal in Wonderment Media’s Apocalypse Weird world and A Pair of Docks, which was a bestseller in children’s time travel fiction. She has also contributed to several anthologies, most notably Synchronic: 13 Tales of Time Travel, which hit #16 in the Kindle Store.

She may or may not have a Ph.D. and dabble in tarot card reading and cat sitting.

You can subscribe to her blog for the latest book news and industry insights at www.jenniferellis.ca. She tweets about writing, cats and teenagers at @jenniferlellis.