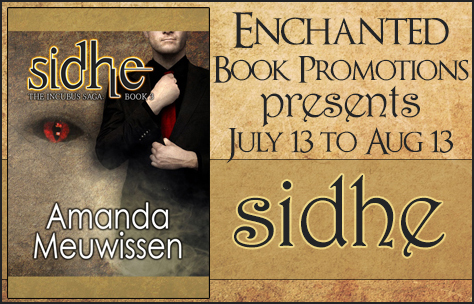 During high school, I was debating between pursuing a career in writing or acting, my two biggest loves, and it was after receiving an anonymous review on a Final Fantasy VIII fanfic I was writing dealing with depression and suicide (it was actually an alternate ending to someone else’s fic that I worked on with her, because I wanted a happier ending) that I realized how powerful writing can be. Me wanting to give this fictional character hope and a better ending inspired this one reader to seek the same for themselves, and that is something I could never achieve doing something else.

Where did you get the inspiration for Sidhe, and your series?

You know, I always forget to mention where Malak actually comes from, and he is so much the heart of this third volume in the series. My online alter ego has been Crimson Domingo for a long time, or just Crimson. Once upon a time, when I was obsessed with creating story idea, I took my own pseudonym and those of my friends and tried to flip them into the antithesis of each other. Crimson = Nosmirc, which became Nemirac. Whenever I play an evil character in a video game, that’s what I name her. It spiraled into this whole idea of dual-personas, and before I knew it, Nemirac was the mother of all evil, the source of all evil on Earth, like the dark side of a ying yang, and Malak…who I honestly can’t really recall where he came from initially, appeared to me as the light side, everything that was good and pure. He loved Nemirac who could never love him, but when she one day found love with a human, becoming something good but NOT because of Malak, he became the flip side and turned evil. Malak has ever since been this overarching sympathetic villain that I have always wanted to place into a story, and finally here I was able to do it as the king of sidhe, potentially the devil himself. If anything inspired how this story goes down, it’s Malak.

I go over things myself probably obsessively before I even consider another editor looking. I had an associate editor on all of Incubus, and also had extra opportunities to edit myself by being the narrator for the audiobooks. You’d be amazed what you catch from reading things aloud. However, I’m also working closely with a friend on my next project before I even start the normal editing process with my publisher, and it is really opening my eyes.

Complete at least half of my next fiction book, and get a first draft done of the nonfiction project I’m working on about female body image.

There is nothing like that feeling of being in the zone, just feeling the muse flow through you as the words pour onto the page. What I hate is when I can’t get a story out of my head, cannot concentrate on any other aspects of life, and feel like I’m wasting every second I’m not writing the next scene down. It’s a bit like an addiction.

So the nonfiction story is dear to my heart, as I’m gathering stories from all sorts of women in my life to explore what ‘pretty’ means and how certain conceptions and misconceptions affect us throughout life. My fiction piece is very exciting, as it’s a YA M/M romance story about vampires. Vampires are my one true love, and yet I have never written a story about them. I’m so excited to finally get my idea of vampires on paper. It’s also chock full of real life stories mixed in, and people from my life. Loosely based on a true story…aside from the vampires. As always for me, the relationship between the two male protagonists will be the focus. 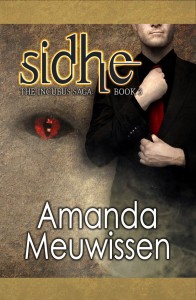 Nathan Grier returns from the Veil a changed man. The consequences of his time with Malak, the dark sidhe king, and the deal made to free him may be more than he can bear. The weakening of the Veil and new enemies foretell of a greater battle still ahead. With Nathan’s brother Jim now an Awakened changeling, and Nathan’s role in Malak’s plans finally revealed, Nathan’s love for fae hunter and incubus, Sasha Kelly, may not be enough to save him after all.

The Previous Books in the Series 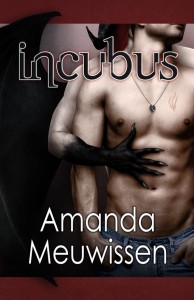 Nathan Grier only ever wanted a normal life, but for him, life, family, and love are anything but normal. On the other side of the Veil, dark and light fae exist outside the knowledge of most humans. Nathan was born human, but his twin brother Jim is a changeling. On the run since they were children, time for both of them is running out. Turning to fae hunter Sasha Kelly for help, Nathan must soon face his growing feelings for the other man while trying to save himself and his brother from a fate worse than death. 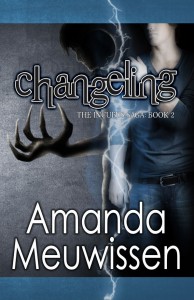 Nathan Grier’s dark fae bounty looms overhead. As he faces the very real threat of becoming a slave to the bounty’s owner, his brother Jim uses his changeling abilities more and more trying to save him. Every changeling throughout history turns evil once their powers manifest, meaning time may be running out for both of them as Jim nears True Awakening. Fae hunter and incubus, Sasha Kelly, is prophesized to save Nathan, but while Nathan has embraced his feelings for the other man, he fears their time together will be cut short—either from his impending fate…or Jim’s.

Amanda Meuwissen is the author of The Incubus Saga and the novelette The Collector. She also serves as COO and Managing Editor for BigWorldNetwork.com. She oversees editing and series selection, and is featured as a narrator for several BWN audiobooks and series. Amanda lives in Minneapolis, MN, with her husband, John, and their cats, Helga and Sasha (no connection to the incubus of the same name).