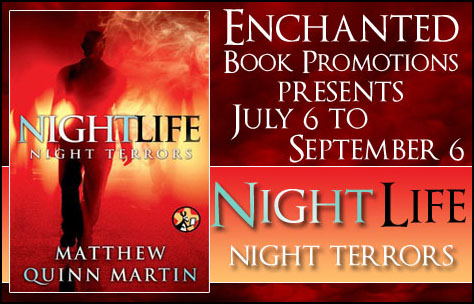 When I realized I didn’t have enough talent to be a professional musician. Don’t get me wrong; I’m a competent instrumentalist. I just don’t have the edge that sets certain musicians apart from the pack. I drifted into writing sideways, as a way to keep from going crazy in between acting jobs (which is something I used to do professionally…but at just about the lowest level possible). It’s taken me a long time to really consider myself a “writer” let alone an “author.”

Music will always be my first love, though…and I like to think that some of the skills and discipline I acquired as a musician have helped me become a better writer.

Where did you get the inspiration for Nightlife: Night Terrors?

This is the question every writer dreads. Honestly, I just don’t know where the ideas come from. I’m just glad that they do. Nightlife: Night Terrors is a collection that includes my first novel Nightlife as well as the full sequel As The Worm Turns and a related novella, Hazardous Material.

And while I don’t know where the inspiration for the series came from…I can tell you when it hit me. I was walking through Grand Central Terminal, on my way to my crappy survival job when the concept just kind of appeared in my mind. Nothing overt sparked it…it just showed up.

I’m usually an “edit as you go” kind of writer. But it slows me down and perhaps hamstrings me a bit. I’m trying to be a bit more freewheeling on this new project. I’m forcing myself to just write forward and trust the process.

That said, I do like to let a project sit in the drawer for a few months and then go back to it with the blue pencil. It’s a lot easier to “kill your darlings” after you’ve taken time away from them.

That’s like asking someone to name their favorite child. All of my characters have offered me joy, frustration, surprises, problems and so on. They are all my favorites.

My goals for 2015 (which is now half over…hard to believe) are the same that they’ve been since I first started writing. I want the words I put down to make the world a better place that it is now. That’s a very slippery goal; I know that.

I’m not delusional enough to believe that I can change the world on my own…certainly not with a few works of fiction. But I’d like to believe that what I have to offer makes a difference, no matter how small.

I’ve got a few things cooking, but they are too raw at the moment to talk too much about the. However, I will say that my writing partner (Libby Cudmore, whose own stellar debut novel The Big Rewind is due out in February from William Morrow) and I are putting the finishing touches on a Young Adult novel that we hope to bring to market this fall. 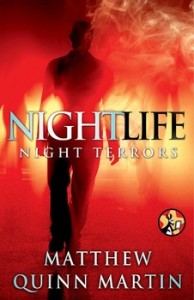 “Doesn’t get any darker than this; you can actually feel the blood spatter…” –Hugo & Nebula winner James Patrick Kelly

Enter the world of Nightlife, where the streets crawl with unimaginable demons, and a monster can lurk behind every friendly face…

Matthew Quinn Martin first terrified horror fans with Nightlife, the captivating story of two unlikely monster hunters determined to save the city of New Harbor from the Night Angels—bloodthirsty creatures that feed on the forgotten. Jack Jackson and Beth Becker are among the few who can see these creatures for what they really are, but as they hunt the creatures, a mysterious organization known only as The Division is hunting them.

In the novella Hazardous Material, we get a glimpse of The Division’s origins and aims, when a young man stumbles onto a long-abandoned video arcade—which three decades ago was the site of the largest mass shooting in New York history—and unwittingly uncovers a relic of unimaginable power and mind-altering terror.

And in the never-before-released As the Worm Turns, Jack and Beth are back, along with their faithful dog, Blood. For months they’ve been keeping just one step ahead of The Division, whose enigmatic leader has been pursuing them with the single-minded obsession to capture them by any means necessary. But as Jack and Beth continue their quest to rid the world of the creatures once and for all they find themselves facing off against something even more terrifying than the Night Angels––something that could hold the key to humanity’s salvation…or its doom.

Three amazing horror stories in one chilling bundle…the only thing you won’t fear is the price!

Reviews for the first book:

“Thrilling, edgy, and scary as hell, Nightlife is an outstanding debut and one of the most original takes on the vampire novel I’ve ever read.” – Jason Starr, International Bestselling Author of The Pack

“Nightlife completely creeped me out. Martin is a master of suspense. Keep me up all night again soon!” –Nancy Holder, New York Times Bestselling Author, The Wicked Saga

“Doesn’t get any darker than this; you can actually feel the blood spatter. Nightlife is the gutsiest debut I’ve read in a long time.” – James Patrick Kelly, Hugo and Nebula Award winning author of Think Like a Dinosaur.

“An incredibly riveting, edge of your seat plot that was equal parts spooky mystery and gruesomely tragic horror novel.” – All Things Urban Fantasy

“Whoa! This is like the ultimate Vampire book! No fluff here. This is not your modern, sexy, ‘I wanna get laid by a vampire’ book – this was some scary stuff.” – Wall to Wall Books

“I don’t think I’ve actually read anything like it!” – Bibliosanctum

“Nightlife is the perfect story to read if you like to get a good scare on!” – Jersey Girl Book Reviews

“Have you been wanting vampires that are mean, nasty, eating machines? Tired of the glitter and sparkle and angst? Well, check this book out….a perfect blend of action and pathos that most readers of horror should enjoy.” – Now is Gone

“The vampires Matthew created are nothing like I ever read before. They are scary and creepy!” – Yummy Men and Kick Ass Chicks

Born in Allentown, Pennsylvania and raised in New Haven, Connecticut, it wasn’t until Matthew moved to Manhattan that he realized he was a writer. These days, he lives on a small island off the North Atlantic coast of the United States where it gets quiet in the winter…perhaps too quiet. . .

Buy the Book on S&S Publishing

Buy the Book on B&N

Buy the Book on Amazon

Buy the Book on iTunes

Buy the Book on GooglePlay