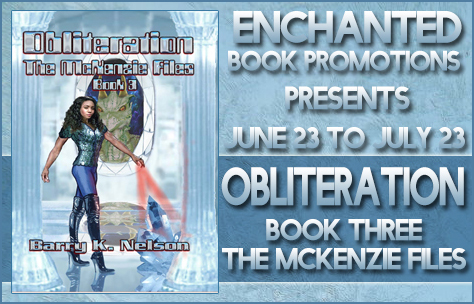 I’m interviewing Barry K. Nelson, author of science-fiction “Obliteration”. Welcome to my blog, Barry, and thanks for answering my questions.

When I was a teenager. I was always good with writing. I suppose you can call it a natural talent.

My inspiration for McKenzie Files came from Star trek, Star Wars, and marvel comics characters. I’ve considered McKenzie Files to be a cross between Star Trek and Marvel’s X-Men.

After my manuscript is completed I do my own editing for any errors and possible changes that I might want to make. After that I send my finished manuscript to my publisher, where they then take the work through their own editing process.

I like the title character Colin McKenzie. His personality is similar to mine.

I would like to finish McKenzie Files 4 around the end of the year. Then I plan to get back to a WW-2 horror story that I’ve been putting off.

I’m working on McKenzie Files Book 4. As well as making a full length comic version of my first McKenzie Files book. After that I plan to get back to my project of creating an animated version of the first book. 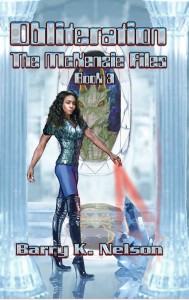 The three reprogrammed Brelac Reploids forming the special team Silencers still faithfully serve the United Protectorate under the watchful monitoring of the Central Intelligence Division. Stationed on Maseklos Prime, Colin McKenzie, Diane Christy, and Kelly Lytton are called to a hostage scene and end up with clues that lead to the elusive Dr. Arthur Trevors. Although initially a traitor who worked undercover with the Brelac, Trevors was in large part responsible for the capture and reprogramming of Colin, Diane, and Kelly so they could serve their current function as weapons for the Protectorate. The war with the Brelac is not going well, and the Silencers are given an advanced warp-drive ship and sent beyond their home quadrant, Poseidon, to the last known coordinates of a missing ship. Their mission is to locate the missing ship, part of an original task force of five ships sent out to find other human colonies and enlist their help with the war against the Brelac. As soon as Colin and his team leave the quadrant, they run into trouble, and things go downhill from there. They find themselves in the midst of a war between local factions on a planet far from home and feel obliged to aid the human faction against a clearly superior force that seems to have help from a monster who leaves a wake of death and destruction wherever it goes. The more they find out, the weirder things get, and they end up stranded with no way home, much less any hope of completing their original mission to find the lost task force ship. This new enemy they face seems invincible, and they wonder if they’ll survive as everything and everyone around them is destroyed. Maybe this time not even their Reploid powers will save them. But what other hope does humanity have? 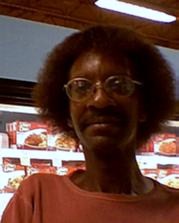 A Pennsylvania native, Barry K. Nelson has attended college and has worked at a variety of jobs, including retail and the corporate environment. Barry enjoys reading and gardening and is a fan of science fiction and horror movies, Marvel comic collecting, and the X-box 360.

Barry has written short stories, and his first book in the science fiction series, The McKenzie Files, is soon to be followed by a sequel, Assassination Anxiety.

Barry is a member of Ning and Goodreads, can be found on Facebook, and can also be reached through Penumbra Publishing.