Book Excerpt from Eye of the Storm: Eilida’s Tragedy 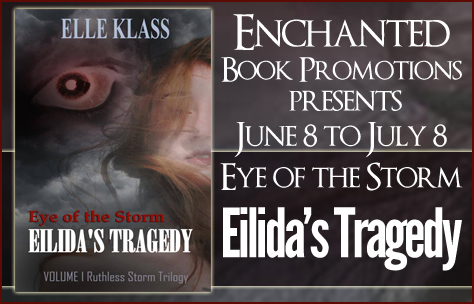 Silently, she stole across the street, but instead of going to the front door, she put her ear up to the wall and listened. From somewhere buried inside her a primordial instinct welled up, which frightened her more than the storm brewing overhead. With her body close to the Turnwell’s house and her chest facing out, she advanced to the back. Trembling sobs alternated with short, shallow breaths told her ears that a small child was wailing inside. Her eyes caught sight of a dim light shining from the door which had been left open a crack. As she slid along the wall of the house, steps unfolded in front of her, leading up their back deck. She cocked her head, glancing towards the window and slowly progressed up the steps without a creek, something like a cat stalking its prey. As she reached the final step, she melted along the wall until her head became flush against the door frame. Taking a deep and silent breath, her guts inside wrenching and twisting, she peered inside the cracked door, gasping at the scene before her eyes. Eilida tore down the steps at warp speed, descending the tree stuffed mountain, while tears cascaded violently down her cheeks.

Thoughts raged through her brain churning and contorting. While she was on auto pilot, she continued to charge downhill without any thoughts as to where she was going. The horrific scene inside the house played like a broken record in her head. Tree branches tore at her clothes and scratched at her flesh as she dashed down the ridge. She barely felt them stinging as her mind was too consumed by the vivid spectacle she had witnessed inside the Turnwell’s home. Bleeding gashes covered her arms, face, and legs. Gnarled tree branches grew arms jutting into the path before her eyes. The rain began to pour across her forehead, leaving flowing rivulets washing away her tears and blood, leaving chunks of hair plastered against her face.

The solid earth had become bombarded with water rushing hard under her feet, causing her to slip in its wetness. She reached her hand out for something to grab hold of, but the trees curled in their disfigured appendages while her feet slipped further beneath, digging into the wet savage ground. Desperate mud covered hands penetrated the sludge groping for a large tree root. Her feet sank further into the ooze until they hit a large rock, sending Eilida flying one end over the other, jostled like an unwanted toy, down the ridge. Tree trunks and small rocks got their licks in bouncing her to and fro. The inertia of her body halted by a large boulder nestled beside the river, leaving her petite frame motionless against the flooding rains. A mess of blood curled and flowed from her head, leaving tributaries along her cheek. Shreds of fabric that used to be clothing clung to her bloody skin as the shadowy moonlight bathed her immobile and unconscious body. 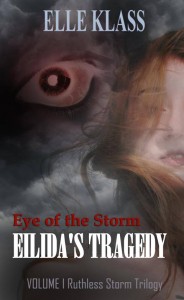 Title: Eye of the Storm: Eilida’s Tragedy (Book 1 in the Ruthless Storm Trilogy)

A disturbance at her neighbor’s house piques Eilida’s curiosity. What she discovers is so shocking it sends her running through the mountainous woods during a thunderstorm. She slips on the wet ground, plummets down Mount Wilde, and slams into a large boulder beside River Freedom. Eilida is transported to Lyden, where Sunshine, a receptionist at the local paper becomes engrossed in her story. The further Sunshine delves into Eilida’s life the more entangled their lives become. Paranormal events, frightening dreams, and terror filled memories draw the women together into an unthinkable web of horror.

What the Reviewers Say:

“It is a well written and compelling tale with an amazing concept that is worth the read. Great for young adults and adults as well.”

“This psychological paranormal thriller, reminiscent of the “Twilight Zone,” is a chilling tale with mystery and intrigue saturating every page.”

“It’s a Hitchcockian plunge by Ms. Klass, who is once again exploring the world of amnesiac episodes, violent deaths and childhood trauma.”

John Reinhard Dizon author of The Triad, Transplant, and Nightcrawler 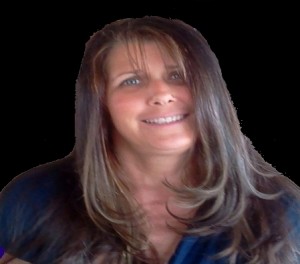 Elle was born into this world in Redwood City, California and spent her childhood growing in and around the San Francisco Bay Area. She graduated from the University of North Florida. To date she has published two novels As Snow Falls and Eye of the Storm Eilida’s Tragedy (Volume 1 Ruthless Storm Trilogy) along with a short story series titled Baby Girl.For fun she reads, spends time at the beach, travels, and enjoys time with her favorite friends, and family. She is a night-owl known to be a hermit during rainy days, as she loves the sun, and is mostly found poolside over the hot, humid summer months.

Eye of the Storm Eilida’s Tragedy

There is a tour-wide giveaway for two signed paperback copies and swag (two wrist bands and a keychain). Giveaway is international.