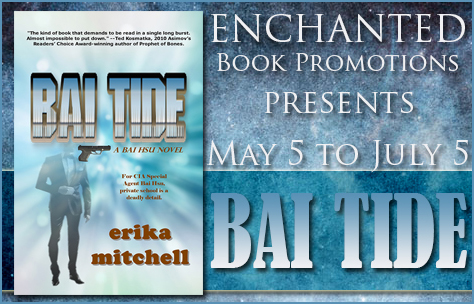 Agnes’s office at the end of the hall was largest of all and afforded a stunning view of the dormitory, classrooms, and most of the thirty acres of property the school owned. I sat in one of the frigid-from-the-air-conditioning leather armchairs in the corner and pressed the blinking yellow light on the secure teleconference device that sat on the table to my left.

The projected image of a man I’d never met lit up the wall in front of me. He was seated behind a desk, typing on a keyboard off-screen. He kept typing for a few seconds after I picked up the call, then clicked his mouse before looking into the camera.

He cleared his throat. “Mr. Broccoli, I presume?” He sounded American, appeared to be in his late fifties, and had the lean look of a man who’s stayed active his whole life.

“It depends. Who are you?” Maybe my reply seems rude, but you learn quickly in the intelligence community that a stranger is a potential enemy until proven otherwise.

“Nice James Bond reference. I like your sense of humor.” He smiled, revealing even white teeth and crinkling blue eyes. He had a good haircut and a nice tie, so I distrusted him out of hand. Government work doesn’t generally pay well enough to afford ties like that.

“My name’s Arthur Peters. I work with the State Department.”

I resisted the urge to gulp. Mr. Nice Tie Nice Eyes didn’t just work with the State Department. He was the Under Secretary for Arms Control and International Security Affairs. He was one of those behind-the-scenes guy who knew the secrets’ secrets, and it made me very, very nervous that all my poking around had attracted his attention. This meant something big was burbling in the watchdog section of the State Department and it had something to do with the jackhole who’d tried to blow me up. 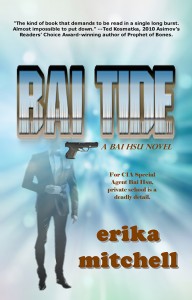 After the events of Blood Money, CIA case officer Bai Hsu is assigned to a high-security private school for what he’s told is an easy assignment. Just a few months after he arrives, a hostile operative with ties to North Korea tries to break in to a school event, with motives unknown.

As his investigation progresses, he unravels a plot that, if not stopped, will result in the untimely and murderous deaths of tens of millions of people.

Bai Tide is Bai’s greatest challenge yet. A mission that will take him from the windswept beaches of San Diego to a whiteout blizzard in the foothills of Pyongyang, and make him question everything he thought he knew about working in the field…and about himself.

Erika Mitchell was born in Orange County, California to a published author and an Anarchist’s Cookbook aficionado. She moved to Seattle, Washington as a freshman in high school, where she promptly realized she owned just one pair of pants and that was going to be a problem in a place with an actual winter.

She graduated from Northwest University in 2003 with a degree in Psychology, which she has yet to use. After a brief foray into technical recruiting (a disaster), she found her calling as a writer and, wonder of wonders, was actually able to find a job where someone paid her to do just that as a blogger.

Blogging turned into writing novels, where Erika has found her niche in the espionage and thriller genre.

Erika currently resides in a small suburb outside Seattle with her husband and two children.