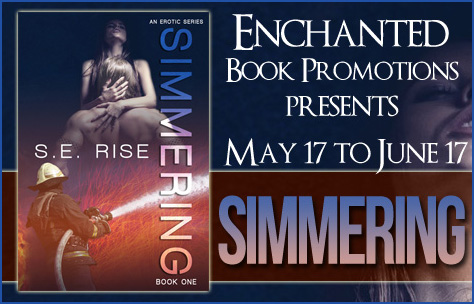 Q. When did you know you wanted to be an author?

A. Throughout my life I have written short stories here and there. In school or when I was bored. But, I have always loved telling stories and people liked listening to them. I think it was in the early spring of 2007, I was in between reading books and I really didn’t have the money to buy something new that I wanted to read.
Instead of dying of boredom, I decided that I would write my own book. I borrowed an old used laptop from a friend of mine and the only program on it just happened to be a word processor.

I made a list of all the things I liked to see or read about, set them up into an outline. I had been playing around in my head with the idea for a character and what refined and focused him. My first book character was The Bringer of the Apocalypse, The Harbinger of Doom, the Anti Christ. But I thought where would be the fun in that? How about I make him just a normal guy with a very bad job? What if it was a bad job that someone had to do?

That is when A Harbinger’s Tale was born…I would tell you the main character’s name but that happens to be part of the story as well. So, no spoilers.

Q. Where did you get the inspiration for Simmering?

A. I wanted to try something new. I had been writing horror for 7 years and I saw the way the trend was going with the 50 Shades of Grey phenomenon. I read 50 Shades and knew I could do it. So I did.

Writing was the easy part. Researching the equation and algorithm of erotica was a little more difficult. So was writing as a female character, since I am a male. I am well aware of the fact that men and women see the world differently. I have been married for 15 years.

That is why I gathered a small group. It was a group of women that I trusted and found traits in that I wanted my main character to project.
I write women who are strong, intelligent and can kick some ass. Whenever I needed advice on how my character might react I asked them for their input. It worked out great.

A. When I was a self published author it was horrendous. I learned the hard way of course; you have to have a well edited book. A couple years ago I had smartened up and instead of paying thousands of dollars to get it edited I sent it off to my proof readers and Lit Grammar Nazi’s. They did a pretty good job and made it to where I didn’t sound like I was a babbling idiot. This I appreciated.

When I joined the Booktrope team in February of 2015, My dreams as a writer came true, I was given an Editor whose actual job was to Edit. That’s when my world of writing stepped into the big leagues. I had great, original and entertaining stories…Now I was able to add Edited to them. They also when through a professional proofreading as well and the product, my manuscript, became incredible. After I got it back from Booktrope Layout it was simply amazing.

Q. Who is your favorite character from the book?

A. Allison Fairchild. As I stated in the above question, I made her exactly like I wanted. I imbued her with the qualities I admired most in a woman.

A. I have a whole slew of horror novels coming out through the forsaken Imprint of Booktrope. All my Self Published stuff remade and republished. They will have a professional upgrade. July first my horror novel The Dead Cat Paradox hit the market. We have a special type of project in the works through the Forsaken Imprint that involves Serial type series. There will be some Penny Dreadful’s and E-zines. Short Story anthologies. Horror Hooligan short story Ezine.
August first I will have two books coming out Sinning book 2 in the Simmering series and my horror novel Lest We Become.

Oh and I have a Novella completing the Booktrope process that is going to make some waves. Here is a clue about it. Three Days without Grace…It’s a horror novel set during the three days between the Crucifixion and the Resurrectiuon of the Christ. The story is told by the Prince of Demons, as God withdraws his Grace from the world and lets the Children of Chaos run free.

Q. Are you working on something now?

A. If so, can you tell us a little about it? Am I working on something now? Well, I have creating a Brand out of pen name and trying to become a Social Media Legend, I’ve been taking care of my priorities: My wife and two children, going to work, book stuff and not losing my mind…but yes I say but…I have been finishing up the thirds book in the Simmering Series. Sizzling by S.E.Rise will be out in the late fall or early winter. 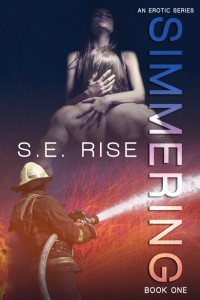 Who would you rather find in your bedroom, a steamy hose-wielding fireman or a dangerously obsessed ex-boyfriend? What if you found both?  Romance writer Allison Fairchild is growing frustrated with her first attempt at Erotica until she reads a well-timed magazine article. What working man makes the best lover? The article sparks an idea and her eyes are irresistibly drawn to the top-ranked firemen just across the street. It might be coincidence or driven by fate but it is all the motivation she needs.