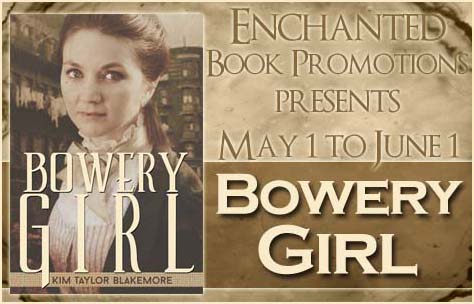 I’ve been writing since I was little, the typical stories with haunted houses and ponies and girls with swords. After college and a drama degree, I tried my hand at playwriting, discarding it for acting. I always wanted to be a writer – I was and am an avid reader – but it wasn’t until I stuck in my house in a snowstorm and bored out of my gourd that I actually wrote the beginnings of a novel. And the snowstorm stopped, but the novel kept going. And I was hooked. My parents taught me the love of reading; I am definitely a bookworm. And I have always made up stories in my head – letting “What-ifs” formulate and tangle and dance. I have so many beginnings to so many stories! It’s finding the ones that stick that’s harder for me.

Where did you get the inspiration for Bowery Girl?

I ran across a copy of Jacob Riis’ “How the Other Half Lives” in a dusty bookstore. The book tells the heartrending stories of the Lower Eastside of Manhattan in the 1880s, accompanied by photographs Riis had taken. Riis was considered a muckraker at the time. But he passionately believed people should know about the extreme poverty of the area. He traveled all over the U.S., shining the slides of the images on lecture walls, while telling the tales of the people who inhabited such a dismal world.

There were tens of thousands of “Street Arabs” roaming the allies and thoroughfares. And I wondered what a young woman would have become on those streets, how she would survive, what brought her joy, and what were her dreams. This as the glimmer of Mollie Flynn, the protagonist of Bowery Girl.

I constantly edit as I write, and don’t move on to another chapter until I’m happy with the one I’ve finished. I suppose it gives me a sense of accomplishment, rather than the dread of thinking, well, I’ll clean it all up later. It helps greatly once the book or story is in an editor’s hands.

I’m midway through writing another women’s historical novel, Under the Pale Moon, and am planning to also complete a novella. The novel is quite serious; the novella will most likely be something lighter and romantic.

I finishing up Under the Pale Moon. It’s set in Monterey, California in 1946 and explores the relationship between Irene Dodd, a woman frustrated by the constraints of her life after her responsibilities during World War II, and her ex-lover Kath Walker, an Army combat nurse haunted by the ghosts of war. The post-war era was one where society tried to return to some “norm”, and the beginning of the idealization of the white picket fence and 2.5 children. I wanted to explore these women who live outside that norm (or struggle to maintain that norm) and how the echoes of war and a fragile peace impact them. 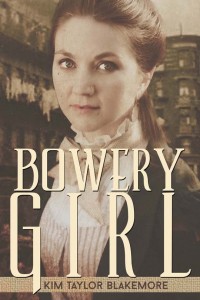 “…inspiring and poignant historical fiction novel that will engage readers that are looking for an insightful, yet entertaining read. ” 5/5 stars, Luxury Reader

“lends credence to the millions of historical and contemporary girls who dare to dream in the face of extraordinary challenges.” – Starred Review, Kirkus

“Gang violence, raucous carousing, sex, accidental pregnancy, and crime–not what most will expect from Victorian-era historical fiction. But that’s exactly what they’ll find in this tightly plotted novel…” – Booklist

NEW YORK, 1883: Gamblers and thieves, immigrants and street urchins, Do-Gooders and charity houses, impossible goals and impossible odds. The Bowery is a place where you own nothing but your dreams. And dreams are the only things that come cheap for pickpocket Mollie Flynn and prostitute Annabelle Lee.

Pleasure is fleeting – and often stolen. Nights at Lefty Malone’s saloon, sneaking into the Thalia Theatre. Then it’s back to their airless, windowless tenement room and the ongoing struggle to keep a roof over their heads and bread in their stomachs.

The Brooklyn Bridge is nearing completion, and things are changing in New York City. The two women fantasize of starting a new life across the East River. Nothing but a flight of fancy, perhaps, until wealthy Do-Gooder Emmeline DuPre, who has opened the Cherry Street Settlement House, steps into their lives with her books, typewriters, and promises of a way to earn a respectable living. Despite Mollie and Annabelle’s fascination with the woman and what she offers, is Emmeline helping or meddling?

Is it really possible to be anything other than a Bowery Girl? Mollie and Annabelle will have to decide exactly who they are, and what sort of women they want to be. 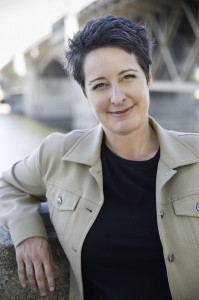 Kim Taylor Blakemore writes women’s historical fiction and romance that explore women’s lives and brings their struggles and triumphs out of the shadows of history and onto the canvas of our American past.

She is the author of the novels Bowery Girl, and Cissy Funk, winner of the WILLA Literary Award for Best Young Adult Fiction. Her interactive historical romances The Very Thought of You and It Don’t Mean a Thing, are out now on Kindle and SilkWords.com.

Her current novel, Under the Pale Moon, is due for release in Fall 2015. Set in post-World War II Monterey, California, it explores the relationship of a married woman breaking the bonds of conformity, and a combat nurse haunted by the ghosts of war.

She is a member of the Historical Novel Society, Women Writing the West and Romance Writers of America.