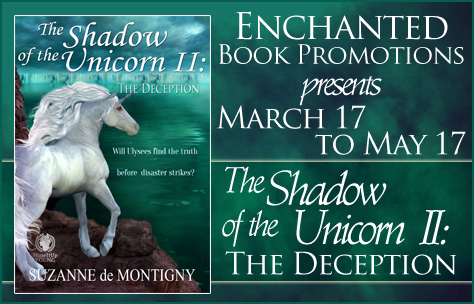 I’m interviewing Suzanne de Montigny today, author of MG fantasy “The Shadow of the Unicorn II: The Deception”. Welcome to my blog, Suzanne, and thanks for answering my questions.

I really enjoyed writing as a child and wrote my first novella in grade six, but I didn’t really take it seriously until I was 46, after my father died. I remember having an intense need to write, but I didn’t know what. Then, one day, as I was cleaning out the basement, I found a rewritten version of my first novella. There were only four chapters, but I was intrigued and began writing again. I haven’t stopped since. That was eight years ago.

2) Where did you get the inspiration for The Shadow of the Unicorn series?

I was horse crazy and desperately wanted my own horse. I never got it. So I wrote about unicorns. Close enough, I guess.

I think that’s my favourite part. The first time around, I write whatever comes to my head. When I reread it, I think, “Oh, that’s just awful.” I tweak and retweak, change words around, add conversations, and it goes on and on and on.

4) Who is your favorite character from your book?

Which character is your least favorite? Definitely dear, sweet Darius is my favourite. He’s the last of the surviving dinosaurs who has lived as long as he has because his destiny is to lead the unicorns to safety. Icarus is my least favourite. He has no conscience and leads his herd with deceit.

To finish writing and to submit the third of The Shadow of the Unicorn trilogy.

Yes, I’m working on The Shadow of the Unicorn: The Revenge. It’s the last of the series. In this one, it’s a unicorn who’s the bad guy and a human is the heroine. Then, I just finished a teen paranormal called A Town Bewitched that I’ve just submitted. 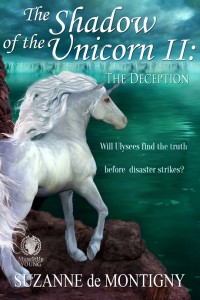 Title: The Shadow of the Unicorn II: The Deception

Ulysees’ breath was ragged, and his heart filled with terror when they galloped toward the herd pursued by an enraged Icarus.

How did the Legacy of Azaria transform into the world fear it has, the unicorns barely existing hidden in the depths of the forest? Why is Icharus, the Great Stallion, so cruel and ruthless? And who is Jaresh, the invisible being who takes away their powers? Angry, the young colt Ulysees and his friend Téo rebel, following an abandoned trail where they’re discovered by humans. Now the entire herd must make an exodus. But Ulysees discovers there’s more danger then just humans when he meets a giant creature who warns them of impending doom… 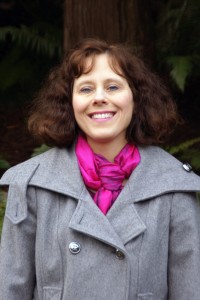 Award winning author, Suzanne de Montigny, wrote her first novella when she was twelve. Years later, she discovered it in an old box in the basement, thus reigniting her love affair with writing. A teacher for twenty years, she enjoys creating fantasy and paranormal for tweens and teens. She lives in Burnaby, B.C., Canada with the four loves of her life – her husband, two boys, and Buddy the dog.

The Shadow of the Unicorn II: The Deception. http://youtu.be/xZgQSBowrFE

The Shadow of the Unicorn: The Legacy. http://youtu.be/St9OsyK974o

The Shadow of the Unicorn II: The Deception

Amazon |  Muse It Up Publishing

The Shadow of the Unicorn: The Legacy

Win a $50 Amazon gift card during the tour.
a Rafflecopter giveaway