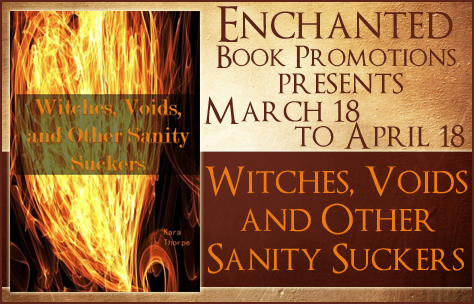 I’m happy to interview Kara Thorpe on my blog today. She’s the author of “Witches, Voids and Other Sanity Suckers”, a paranormal romance novel. Thanks for visiting!

I’ve always told stories to my friends. I think in high school is when I really decided that I wanted to share my stories with everyone. There was this horrible, soap opera-like story that I started writing my sophomore year (in French class) that I would share with my three best friends during lunch. I can’t read that story now without cringing, but we were hooked on it back then.

2) Where did you get the inspiration for Witches, Voids and Other Sanity Suckers?

I love writing character interactions. The potential interactions between Rick and Az were the main inspiration for this book. Long before I had an idea of what the plot was going to be, I had written short snippets of conversations between the two. I like relationships that are based on friendship and mutual admiration with just a hint (or more) of snark. Rick is used to everyone bowing to him and Az is used to living in her own little world, so putting the two together was a lot of fun.

It involves having critique partners and others read through as I’m writing and then again when the book is finished. By the time it’s through, there are about six people who could quote the book word for word. I have CPs who check grammar and CPs who focus on content. I love them.

For favorite, I would be torn between Rick and Az. The book is from Rick’s POV, which is a first for me, so I had to spend a lot of time in his head. I’ve written a couple of post-novel short stories (I like to fill in gaps in timelines and flesh out characters) from Az’s perspective. After writing the short stories, I would almost say that the two teenage boys Uriah and Quinn have climbed the list of favorites. My least favorite character would have to be Detective Greer. He’s not a bad guy in the traditional sense, but he’s in charge of the department that investigates paranormal incidents and he doesn’t understand the Paranormal Community. He doesn’t want to understand the people he’s supposed to protect and serve.

I would like to finish the sequel to Witches, Voids, and other Sanity Suckers in 2015. I would also like to finish another project I’ve been working on for over two years.

Letters of Smoke has been in my “In Progress” folder for over two years. I love characters and relationships, and I absolutely adore ex-cop Riona and her blind, psychic partner/best friend Nate. Riona is from a middle-class family of cops and psychics. Nate is from an old, wealthy Charlotte family and didn’t come into his abilities until later in life.   They met during the worst case of Riona’s career, and in a way they are both still broken. They don’t talk about their nightmares or the choices they had to make to save each other. In this universe, the Amity Act requires full disclosure on possible house hauntings. Nate and Riona inspect houses for potential homeowners using his psychic abilities and her investigative skills. What is supposed to be a routine house check turns out to involve murder, cover up, and the past they thought they left behind. 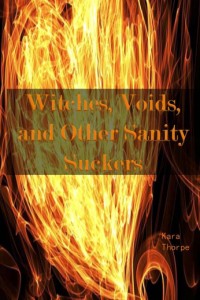 Alpha of the only Shifter pack in Houston, Rick Haskell has his hands full.  When the Mage of New Orleans calls for a favor – a favor that pays $400,000 – Rick can’t refuse.  Even if that favor means adopting the Mage’s daughter into his ragtag pack.  Az Vardan is beautiful, smart, and takes frequent vacations from sanity.  Before Rick can learn how to handle the blonde kiss-and-run firecracker, wolfsbane appears in the local coven’s garden, witches mysteriously die in police custody, and a rash of centaur murders rocks Houston’s Paranormal Community.  Az’s knowledge of magic may be all that saves Rick’s pack when a new, powerful threat moves in to take over his city.

Kara Thorpe started writing as a distraction in French class and never stopped (don’t ask her to conjugate many verbs). Born and raised under the South Texas sun, she spends her days navigating Houston traffic and the exciting world of production planning. Nights are for creating character-driven romances and wrangling a stubborn Siamese. Look for Chai’s cameo in each story.