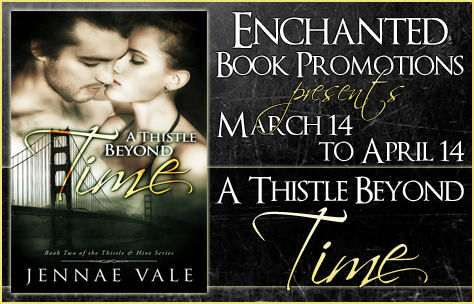 Book Excerpt from A Thistle Beyond Time

Jenna was running the vacuum cleaner when Dylan returned with Cormac. She didn’t hear them enter and when she finally did look up, she jumped, clutching her chest. “You scared me!” Her heart was racing in her chest.

“Sorry, cuz,” Dylan apologized, with a sheepish grin on his face. Jenna looked around Dylan and an angry scowl lit across her features as she spied “I thought I told you to take him to a shelter! What didn’t you understand about that?” She snapped.

“I couldn’t do that to him, Jenna. He’s from another country and he doesn’t know anyone here. He’s a good guy, really. We just spent the last hour having breakfast and getting to know each other.”

“Dylan, I know what you’re up to, so you can stop right now.” Letting go of the vacuum, Jenna crossed her arms over her chest.

“I don’t know what you’re talking about,” Dylan replied.

“I know this is all a practical joke. I don’t know how you pulled it off and I don’t know where you got this guy from, but I can’t believe you would do that to me. You know how upset I’ve been lately and when he appeared out of nowhere, well… I thought he was a serial killer or something.”

“I would never harm ye, lass.” Cormac said, as he peeked around from behind.

“I know that now, but at the time I was pretty scared.”

“I apologize to ye. I didnae mean to scare ye.”

“It wasn’t a practical joke, Jenna. This guy, Cormac, is from Scotland and he was sent here by a witch. That’s the Edna he mentioned. Anyway, he’s not even from this time. He’s from the sixteenth century. Can you believe it?” Dylan asked excitedly.

“No. I can’t believe it and I don’t. Nice work trying to convince me of something completely impossible. Have you been taking acting classes lately, Dylan, ‘cause you’re pretty good. If I didn’t know you better, I might even believe you.”

“Now don’t start that again. You both need to give it up. I don’t believe you.There’s no such thing as time travel. Period. The end.”

“Okay. I won’t mention it again, but we’re not lying and time travel is totally possible, you’ll see,” Dylan insisted. 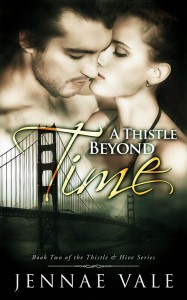 Title: A Thistle Beyond Time

Cormac MacBayne wants a wife and the witch, Edna Campbell, has the perfect woman in mind.  The only problem is they’re separated by five hundred years and thousands of miles.

Fresh from a bad marriage, Jenna Sinclair has sworn off men – that is until a handsome highlander comes out of the fog and into her life.  He’s a mystery and possibly part of an elaborate practical joke concocted by her cousin.  Jenna’s had enough deception in her life.  Can she risk everything to be with a man who is so obviously lying to her?

Jennae was born and raised a New England girl, just outside of Boston, Massachusetts, where her imagination was always bigger than she was. Her large, extended Irish and Italian families were a great source of support, inspiration and humor.  Laughter, love and food were never hard to find in her home. Growing up surrounded by nostalgic, historical landmarks, fed her love of history and creative writing.