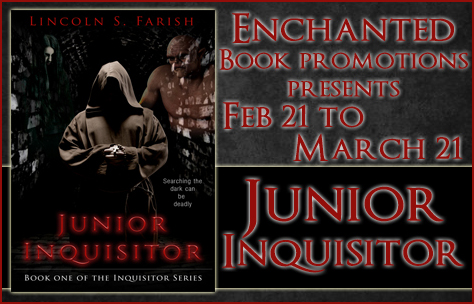 I’m interviewing Lincoln Farish, author of dark urban fiction / horror “Junior Inquisitor”. Thanks for answering my questions, and welcome to my blog.

I have always written things for school, white papers for work, that kind of thing. In my mind writing a novel was a challenge. At one point, many years ago, I had some free time and went to work. The stories came and I kept going.

Where did you get the inspiration for Junior Inquisitor?

It came by asking myself the question, “What would happen if people suddenly were able to do magic.” Answering that yielded more questions. Where would this ability come from, would it uplift the human spirit, or bring out our worst impulses? Then, if they were bad, who would stop them? If all magic users were good I have a Happiest Elf kids story, which for me would be dull. I could have made witches and warlocks both good and evil, but that’s been done. So I went with evil. From that everything kind of sprang forth. How would someone who is evil and very powerful act? What kinds of spells and energies would they have, how would they get more power, how would they act towards each other and regular people? Everyone who’s evil needs some minions, so what would they have and how would they get them? I ended up with this very dark tale about a group of monks who were waging a guerrilla war on evil made manifest.

I read and re-read many times what I’ve written. I probably catch only a few errors, so next it goes to beta readers who tear it up and force me to improve what I have. Then it goes to my editor who bathes my writing in red and again they story improves.

Besides Junior Inquisitor I have two more stories from the series ready to go, so I think I’m good with last year.

Finish up editing the next two books in the series, and write another. Not sure when they will be released. The second one, The Soulless Monk will come out later in the year. I’ll have to see how well Junior Inquisitor does to determine when to release Soulless Monk. The Witch’s Lair will probably come out in 2016, maybe sooner.

I am still writing the current one in my mind. I can say it will not be set in the US, and will entail even more dangerous witches, monsters, and treachery.

Brother Sebastian is halfway up a mountain in Vermont, hell-bent on interrogating an old woman in ashack, when he gets the order to abandon his quest for personal vengeance. He has to find a missing Inquisitor, or, more likely, his remains. He’s reluctant, to say the least. Not only will he have to stop chasing the best potential lead he’s had in years, this job—his first solo mission—will mean setting foot in the grubby black hole of Providence, Rhode Island. And, somehow, it only gets worse…

If he’d known he would end up ass deep in witches, werewolves, and ogres, and that this mission would jeopardize not only his sanity but also his immortal soul, he never would’ve answered the damn phone.

Called an adventurer and quite possibly insane, Lincoln has traveled to many continents and countries on his own and at his country’s behest to determine from whence the darkness comes. Despite persistent rumors, Lincoln maintains that he had nothing to do with the tiger, was not involved in illicit wiener dog races, and has never used his knowledge of genetics to create a better life form.