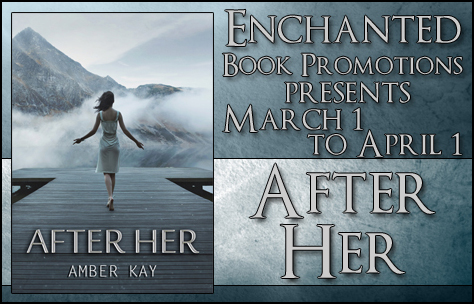 I’m hosting an interview today with Amber Kay, author of “After Her”, a new adult suspense. I hope you enjoy the interview.

I think the moment I learnt to read is when I decided I wanted to be a writer, but the defining moment came from the first time I read one of the Junie B. Jones books. I was in elementary school and those books were my absolute favorite. I learnt from that (as well as from reading too many Goosebumps books) that I wanted to be a writer.

Where did you get the inspiration for After Her?

Well, I love the television show, “The Golden Girls” and one particular episode (Old Boyfriends) was a major inspiration. Sophia is dating a man who has an extremely overprotective sister that insists on joining them on all of their dates. When it’s revealed why she’s like that and what her actual agenda is, things get a little convoluted and somewhat tragic. It ended up being a very heartfelt episode with a sad ending. It’s one of my favorite episodes and one of many inspirations for AFTER HER.

I like to edit as I go to cut down on time and also because it feels less tedious. That way I won’t feel so overwhelmed by the end. There are less loose ends to tie up.

In 2014, I was a bit more focused on school then I was with my writing. So, unfortunately, I didn’t achieve anything special, but I’m definitely hoping to change that this year.

My writing goal is to (hopefully) release a new book every month. I know that’s a very lofty goal, but I committed to achieving it.

Yes, of course! I’m always working on something. Right now, I’ve got a young adult novella, a sequel and a young adult psychological thriller in the works. All of them will be in the area of suspense/ psychological thriller since I absolutely love the genre. For more information and to of course keep up with me, everyone is free to go to my website (www.amberkaybooks.com) and sign up for my newsletter. Or you can friend me on goodreads. 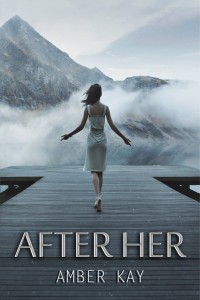 When Vivian offers to make Cassandra the sole beneficiary of her will, Cassandra’s only concern is what she’ll have to do (for this peculiar stranger) in return.

Nineteen-year-old Cassandra knows nothing about the seedy underbelly of the Orange Country high life. Born and bred within the most wholesome little city of Montana, Cassie escaped this stale monotony to California with nothing, but a few bucks in her pocket. This, she thought, was supposed to christen the start of a new life away from the emotional prison created by her helicopter mess of a mother.

As a college sophomore slaving for meager tips waitressing, Cassandra isn’t in the position to turn down easy money. At the rate she going, she’ll be up to her ass in debt until she’s sixty. Her skinflint boss isn’t willing to budge on a pay raise and there is no magic button to make bill collectors go away. When the contentious relationship with her estranged mother leaves her broke, she is forced to decide how desperate she truly is.

Vivian is planning her own funeral. Her days as “society’s queen” are numbered, leaving her to prepare for the inevitable the only way she knows how—closing bank accounts, arranging life insurance policies and assigning beneficiaries. She doesn’t have time to fall apart over “a silly little thing like cancer.” But this eccentric, aging socialite does not intend to die, not without tying up some loose ends first.

Cassandra’s life is at an impasse. Vivian’s life is coming to an end.

Vivian’s “generous” offer (of financial stability) to Cassandra comes with some strings attached. If Cassandra will agree to replace Vivian after the funeral, Cassandra will become an instant heiress worth billions. It’s an indecent proposal many college students would take without hesitation, but it’s not enough to simply step into the shoes of this enigmatic socialite. Cassandra must also marry Vivian’s husband.

It sounds simple enough…until Cassandra discovers that Vivian’s husband is a convicted murderer.

Amber has been writing for as long as she can remember. Yes, she knows how awful her fifth grade plays were, but she didn’t care as long as she had to the power to explore her imagination in the darkest ways possible. She grew up in the south where she ate a lot of BBQ and spent too much time reading.

Some would argue that she was an odd child (and an even odder adult) With her morbid sense of humor, Amber has aimed to be as true to her writing as she can by exploring the darker sides of humankind. She loves psychological thrillers and offbeat plots. Her characters might be unlikeable. Her plots might take disturbing twists and turns, but she tries (as always) to explore the most tragic parts of life with as much humor as possible.

Her favorite authors are Gillian Flynn, Liane Moriarty, Tana French and Laura Lippman. Her favorite movies are dark, suspenseful and (sometimes) romantic. Though she hates most romantic comedies, she absolutely loves (500) Days Of Summer, The Spectacular Now and The Fault In Our Stars.