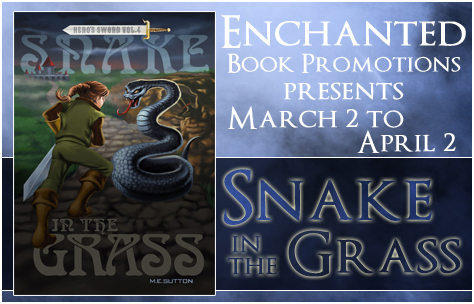 I’m interviewing M.E. Sutton, author of “Snake in the Grass: Hero’s Sword Vol. 4” , a middle grade fantasy novel. Welcome to my blog, and thanks for visiting!

Me: I think I first wanted to write a story when I was 13. And I was pretty good and pretty bad all at the same time. But I didn’t really take being an author seriously until I was almost 40 and finally decided that this was what I wanted to do when I grew up.

Where did you get the inspiration for Snake in The Grass, and your series?
Me: Snake in the Grass is the final step in the first phase of the adventure. They finally know that there is a plot to overthrow the established rule in the Empire. To do that, I had to send Jaycee/Roger out of Mallory. What reason would they leave? Obviously, to save Lady Starla. And since a writing instructor once told me that every story had to involve high stakes, what higher stakes than having her suspected of treason? And no adult likes taxes, of course. So the idea that a messenger would go missing as he’s announcing higher taxes seemed like a good way to get Lady Starla in trouble, and force Jaycee/Lyla onto the road. For the series, I remember middle school as being tough, maybe the toughest years of education. So many kids aren’t sure where they fit in and who they are. So I wanted to write a story about a regular girl going through the same difficulties as a lot of kids–and hopefully strike a chord with them.
What is your editing process like?
Me: I start the first draft by writing anything I think of. On subsequent drafts, I find all the connecting pieces and cut away anything that doesn’t fit, while expanding on gaps. Eventually, I have the story and I can focus on little things like repeated words and basic grammar. Then I send the manuscript to a freelance editor to get a professional eye on it, looking for disconnects. Final step is proofreading for typos and stuff like that.

Me: Yes. I’m a big believer on goals. I even publicize them in January on my blog for people to see. Going public keeps me honest because I feel like I made a commitment. My goals for 2014 were a mix of writing more books in the Hero’s Sword series, as well as working on my adult fiction (mysteries). I didn’t get everything done in 2014, but enough that I consider it a pretty successful year.
What are your writing goals for 2015? Me: I got the rights back from my original publisher, so one of the things I wanted to do is re-release the first three books, which I have. I also want to release books 4-6, and write books 7 and 8. Plus I have a number of goals for my mysteries, most surrounding writing more and getting ready to either query those for traditional publication or publish them on my own.

Me: Right now, I’m writing the first draft for the seventh Hero’s Sword book. It doesn’t have a title yet, but it takes Jaycee/Lyla on her furthest geographical journey yet — into the mysterious Eastern estates to find the identity of Dark Blade. And something terribly serious happens to Roger, so learning to handle a quest without him is another lesson for her to learn, although she does have a friend who steps in to go on the quest with her. 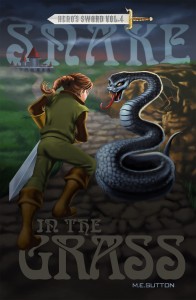 Things are getting interesting at Tanner Middle School. The only official candidate for student council president is Jaycee’s nemesis, Trina Poppelman. Plus there’s a new girl in school. At first glance, she looks like she’d fit right in with the cheerleaders, but Jaycee senses something different about her.

Things are getting interesting in Mallory, too. Lady Starla is expecting an Imperial envoy to discuss new taxes. She plans to oppose the measure and asks Lyla to stand by her side in a show of support. However, when the envoy goes missing, the situation becomes a lot more serious than a proposed tax increase.

In this fourth installment of the Hero’s Sword series, Lyla and Roger hit the road to find a missing envoy before Starla pays the ultimate price for his disappearance. Along the way, Jaycee learns that winning isn’t always the end-game result. 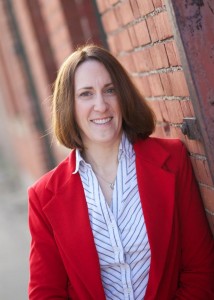 Mary Sutton has been making up stories, and creating her own endings for other people’s stories, for as long as she can remember. After ten years, she decided that making things up was far more satisfying than writing software manuals, and took the jump into fiction.

She writes the HERO’S SWORD middle-grade fantasy series as M.E. Sutton and finds a lot of inspiration in the lives of her own kids. A lifelong mystery fan, she also writes crime fiction, including THE LAUREL HIGHLANDS MYSTERIES, under the pen name Liz Milliron. Her short fiction has been published at Uppagus.com, Mystericale.com (Fall 2013), and in LUCKY CHARMS: 12 CRIME TALES (December 2013).