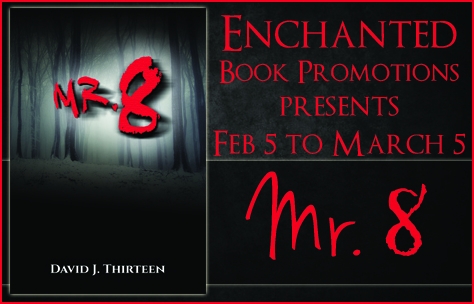 Under the bridge the air was different. The wind was slightly hushed, but noises echoed softly off of the concrete structure. A dank smell of wet earth and urine filled his nose.

The numbers covered both of the bridge struts that formed the only two walls of the man’s home. Countless figure eights were spray-painted from about three feet off the ground to as high as the tramp had been able to reach—higher, in fact. He must have stood on something to gain extra height. Dead center was a giant eight. It must have been at least ten feet high, and the lines were a good two feet thick of crimson red.

Sheets of cardboard, old blankets, and god-knows-what-else formed the man’s bed. The weekend’s heavy rain had left it a soggy mess, which Denton refused to touch. He crouched down in front of it and examined it as close as he dared. There was nothing of note, but when he glanced over his shoulder, he grasped the significance of the red eight.

Denton stood up and went over to it. The paint looked slick against the older, faded graffiti. The picture in the file must have been taken with a flash to reveal its true bright shade. In the sunless gloom, the red was darker and deeper.

On an impulse, he pressed his palm up against the surface. It was smooth and cold. Just as he was about to draw his hand away, there was a strange sensation: a slight vibration rippled through his fingers. 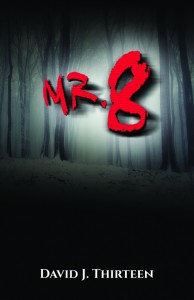 Psychology professor Denton Reed has been pulled out of the classroom to find a killer. Bodies are turning up all over the quiet town of Bexhill. They are found dismembered and burned beyond recognition in a snow covered farmer’s field, by the abandoned mill, and under the train bridge. The only clue linking the victims is the bizarre figure eight patterns left behind in their homes.

Denton must use his unique profiling techniques to uncover the murderer, who the police have dubbed Mr. 8. As he begins to unravel the mystery, a strange pattern begins to emerge. Before their deaths, each victim was seized by dark obsessions and inexplicable changes in behavior. Whatever strange forces are affecting the people of Bexhill, they may actually be more dangerous than any killer.

As a wave of insanity sweeps the town, Denton will put his life on the line to get to the source of the madness and risk all to protect the woman he loves.
But is it already too late?

David J. Thirteen has studied English Literature, Film Making, and Media Studies. He has lived and worked in the technology field for twenty years throughout the North East, in both Canada and the U.S. Writing has been a hidden passion for most of his life.

Mr. 8 is his first published novel and will be in stores on February 5th, 2015. It was first written as a serial story on Wattpad, where it became a #1 ranked feature novel. He still writes and posts new stories on Wattpad every week.