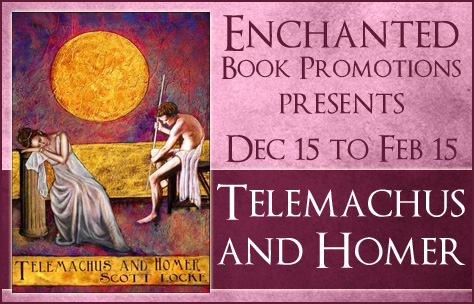 Today I have a very special guest on my blog – Manos, one of the characters from YA Fantasy “Telemachus & Homer”. Welcome, Manos, and thanks for visiting!

1) Please tell us all there is to know about you! Well, keep it short though.

My name is Manos, and I am Telemachus’s right hand man.  I am an ex-member of Order of Olympian Timekeepers.  Before I met Telemachus, like all of the other members of the Order, my job was to make sure that the crystals of time flowed in only one direction, ensuring that tomorrow would come.  Thankfully, I left that boring job and joined up with Telemachus.  You will recognize me because I have the head, legs and arms of a hare and the torso of a tortoise.  Also, around my neck there is an hourglass that turns on its own.

Telemachus is without a doubt my best friend.
My nemesis is Foberos, the wolf.   He works for the Trojans, and he is viscous.

3) If you could choose one holiday destination, what would it be?

4) What is your number one pet peeve?

Bullies and creatures who forget that the bigger they are, the harder they fall. 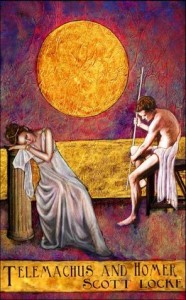 For every boy who grew up in his father’s shadow and every girl who has been underestimated, there comes a time to look within themselves to see if they have the strength to meet the challenges of the lives.  For Telemachus this time arrives soon after Odysseus returns from his twenty year absence, when Telemachus comes to appreciate that his own life needs to be about more than waiting for his father to guide him.  On the verge of embarking on an adventure, he learns that his community has been threatened and realizes that he does not know how to help.  Swallowing his pride, he recognizes that Homer, a young blind woman is a necessary ally.  Homer, like Telemachus has something to prove, for although she is respected for her knowledge, she feels unfairly defined by her community.  Together, as the people of Ithaca’s last hope, they begin their quest.

Scott Locke is a graduate of Brown University with a concentration in biology and of the University of Pennsylvania School of Law, where he earned his J.D.  Scott has published many articles on various aspects of intellectual property.  Telemachus and Homer is Scott’s first publication of fiction.